Share All sharing options for: Diamondbacks 1, Reds 3: Owings Owns Us

Yep, that's right. Remember how bad we were in 2004? On our way to 111 losses? Well, our record is currently a game worse that it was at the same point that horrific season. Now, the worst was very much to come in 2004 - that'd be the spell from July 9-August 14, where we went 4-28, including fourteen consecutive defeats. But it goes to show how far the Diamondbacks have fallen: in barely a month, we've gone from contenders through pretenders to offenders.

We enjoyed the usual Dan Haren quality start - he remained perfect in that department this season, throwing seven innings, and allowing three runs on six hits. With five strikeouts and no walks, he improved his K:BB ratio to 56:9, but even his NL-league leading WHIP couldn't save Arizona. Not when former D-back Micah Owings was just about shutting us down. We managed just one run on seven innings, with four hits and two walks. Know how many times he'd managed that in his 50 career starts previously? Four, and only once since 2007. One suspects opposing pitchers must be exchanging high-fives when they look at the schedule and see the Diamondbacks on their radar.

It marks the twentieth time this season we've scored three runs or less in a game. You will not be surprised to hear that this is the most in the majors [the Giants are next, on 18] And Justin Upton couldn't help, his 18-game hitting streak ending, not with a bang, just an 0-for-4 whimper with three strikeouts. None summed up the evening more adequately than his at-bat in the sixth, where J-Up didn't even take the bat off his shoulder, taking strikes one, two and three before returning to the dugout. That inning ended up an exercise in Fail: Haren squibbed a single off to Owings' right, and his wild throw put our pitcher on second, and Felipe Lopez singled sharply to center - our only hit with RISP. However, with men on the corners and no-one out, Miguel Montero - promoted to the #2 spot - popped a mile high on the infield, Upton K'd and Reynolds flew out to right-center.

Lopez and Augie Ojeda - and please don't stop me if you've heard this before - were the only significant contributors with the bat, each getting a couple of hits, Lopez adding a walk and driving in the Arizona run with a double in the bottom of the eighth. Reynolds had a couple of free-passes, but otherwise it was business as usual. The heart of the order, #2-5, were a combined 0-for-13, though Josh Whitesell did get a hit, which is nice. Another one in he next couple of games, and his batting average may well no longer start with a zero. And a demerit to Chris Young, whose dawdling in center allowed Phillips to whizz from first to third on a single with one out in the fourth, and subsequently score on a sacrifice-fly.

Speaking of Phillips, there were a couple of late incidents which may portend a bit of argy-bargy tomorrow. He seemed to take exception to a pitch inside from Jon Rauch (a perfect eighth inning - Schoneneweis also retired the Reds 1-2-3 in the ninth), and after Phillips grounded out to end the inning, our very next batter, Ryan Roberts was hit by Micah Owings. He denied all intent afterwards - like he'd do anything else - and it has to be admitted, he has been pitching inside for as long as we've known him. Owings was second in the league for HBP in 2007, and still 5th in 2008, despite barely pitching 100 innings. Still, Darin Sutton seemed to think it was deliberate, and the bad thing is, Roberts was hit in the elbow and had to leave the game - I hope he's ok [and ditto Reds' 1B Joey Votto, who had to be carried off between two coaches after suddenly feeling dizzy]

Here's the post-game audio, with Hinch discussing our missed opportunities, Haren talking about his outing, and Lopez saying how this situation is familiar. We don't usually include audio from the opposing dugout, but we'll make an exception for Owings' thought on facing us again, and Dusty Baker on why Votto had to be pulled from the game. 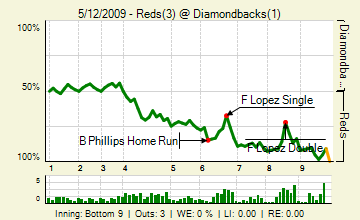 Let's be honest: I am pretty glad not to have to do one of these tomorrow or Thursday, thanks to azreous and the off-day respectively [I imagine the former is busy scouring his thesaurus, seeking synonyms for 'feeble' which have not already been ground into the dirt]. Tight at the top for contributors to the Gameday Thread, with Pyromnc, 'Skins and 'charmer all within half a dozen of each other (and in that order). Also present: kishi, sayheyupton, NewJackCity, TwinnerA, Snakebitten, Brendanukkah, 4 Corners Fan, Muu, hotclaws, ASUJon, TheDBackFan, IHateSouthBend, Teewrecks44, Fiona (welcome!), venomfan, IndyDBack, Azreous, jonny-yuma and victor frankenstein.

So, tomorrow sees another of the BabyBacks v.2009: Bryan Augenstein trying to avoid the sweep, against one of the hottest pitchers in the National League thus far. No pressure, Bryan...