The sun appeared to be peeping its way over the horizon of the Diamondbacks' long, dark night after yesterday's offensive onslaught. However, the celestial orb clearly didn't like what it saw, and decided, like a large, thermonuclear groundhog, to go back to sleep for six more weeks. It was the turn of the Arizona pitching to stink like the dumpster behind Taco Bell, surrendering the most runs since June 17 last year, when - in a Brandon Webb start - we went down 15-1 to Oakland.

Jon Garland was dreadful, and not in a 'walking people' kind of way. He loaded the bases before retiring a Reds' batter in the first. A convenient double-play helped him get out of the inning with a single run allowed, and he retired Cincinnati 1-2-3 in the second, but from then on it was very ugly. Three runs scored in the second, not helped by a Reynolds throw to first plunking the batter in the middle of his back, and the Reds opened the fourth with back-to-back homers. Garland ended up surrendering hits to ten of the 21 opposing hitters he faced. This led to a total of seven runs, and Garland had to be yanked after just 3.2 innings - and that took him 77 pitches to get through.

This left our bullpen bracing themselves for another long night of work, the fourth time in five games they've been called on for more than three innings. Leo Rosales did well, retiring all four batters he faced, but then we brought in Bobby Korecky. I'm pretty sure this will be Korecky's only appearance before getting sent down on Wednesday, when we need the roster spot for Bryan Augenstein. I say this because allowing six runs on seven hits and a walk in two innings of work is not the sort of thing that keeps you hanging around in the majors. His season ERA is now up to 13.50, and I sense his name will not be high on the list, the next time we need a call-up.

Juan Gutierrez pitched a scoreless eighth, and we then turned the ball over to Josh Wilson. Yes: you read that right. Middle-infielder Josh Wilson. It's not the first time he has been called to duty - in June 2007, while playing for Florida, he was called upon for mop-up duty against Florida. There, he pitched a scoreless inning, and he repeated the process here, surrendering a one-out walk then inducing a nice double-play to escape with another zero, and keep his career ERA at 0.00. Frankly, having thrown only 12 pitches, I think he'd have been ready to go out there for the tenth, had we only scored the eight runs necessary... For his temerity, Wilson was hit by a pitch in the bottom of the ninth.

The offense wasn't quite as dreadful - we reached double-digits again, the third time in four games we've done that, which is the best streak of the season. Speaking of streaks, Eric Byrnes continued his multi-hit run, getting three hits for his fourth consecutive game so doing, and Justin Upton had his seventh homer of the season, extending his hitting streak to 18 games. That's the best by a Diamondbacks since Danny Bautista hit in 21 straight during the first month of 2004. Felipe Lopez also had a three-knock night, and Mark Reynolds retook the team lead with his eighth homer, a solo shot, in the seventh. But we had no walks at all, and it seemed that every time we scored, the Reds would come right back and score three or four.

This game was definitely more a chore than a pleasure, and the loss sends the Diamondbacks into last place in the NL West. We bumped against it briefly on April 21st, but that was only a one-day stay. Hopefully, this one is equally brief - if not, the last time Arizona occupied the cellar for more than one day was back in July 2006. 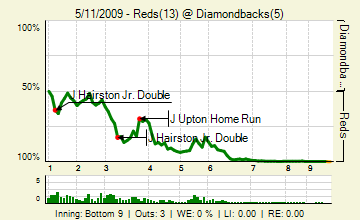 Given the nature of the game, I'm frankly surprised anyone stuck around for this, but we were properly rewarded for our diligence by the appearance of Wilson in the ninth. Pyromnc dominated the comments, his 130 more than twice as many as the next (snakecharmer). Also present were Muu, 4 Corners Fan, hotclaws, Snakebitten, SeanMillerSavior, luckycc, kishi, Sprankton, Scrbl, IndyDBack, Moozazan, mrssoco, TwinnerA, Azreous and Brendan Scolari. Onwards tomorrow, to the respite from misery we get every fifth day: a Dan Haren start...