Share All sharing options for: Nationals 8, Diamondbacks 10: Unlucky #13 for Scherzer, Lucky #3 for Hinch

Being swept at home by the Washington "Natinals" would not have been a good start for your first managerial series, nor would going 13 games without a win be a very fun way to start your pitching career. Luckily, A.J. Hinch did not get tagged with his first sweep, but unfortunately Max Scherzer couldn't stay in the game long enough to earn his first major league win.

This game was like a giant seesaw, with the lead changing hands seven times! It started out well for Mad Max, who is learning that, around here, if you want something done, you have to do it yourself. Scherzer got his first career RBI in the 2nd inning to score his catcher Chris Snyder to put the Diamondbacks up 1-0, but he surrendered that lead the next half frame when Adam Dunn and Josh Willingham hit back-to-back home runs. (Before that, Scherzer had allowed only one other home run this season, to Evil Incarnate Randy Winn.) The Diamondbacks got those runs back in the bottom of the 3rd with back-to-back hits themselves - however doubles - by Eric Byrnes and Snyder. Byrnes and Snyder both had great offensive days, each with two hits, two runs, and three RBIs. (Snyder added three walks to get on base all 5 times.)

By the end of the 3rd inning, it was clear the bullpens were going to play a role in this game, with both starters near 70 pitches. The 5th was certainly going to be Scherzer's last inning, and he gave up another home run to Dunn (this time with Zimmerman on base) before leaving with his team behind 4-3. (Final line: 5 IP, 4 ER, 3 BB, 5 K, 3 HR.) But, Byrnes to the rescue again - he homered off of Nationals starter Scott Olsen to put the Diamondbacks ahead and Scherzer in line for the win, but the clutch hits remained elusive, and the Dbacks couldn't add on with the bases loaded with one out.

Would a one-run lead be enough to get Scherzer his first win? Sadly, no. The first two batters reliever Esmerling Vasquez faced reached base, and Washington played small ball to push across two more runs. Vazquez would, ironically, end up with the win after Arizona posted a huge 4-spot in the bottom of the 6th inning. Three singles and an error by former Diamondback Alex Cintron plated Chris Young, Snyder had another double to bring in two more, and Ryan Roberts singled to score Snyder.

This time, the Diamondbacks bullpen did hold the lead. Jon Rauch gave up an unearned run in the 7th, Tony Peña had a terrific 8th inning (after Schoeneweis allowed a single) - 1 IP, 0 R, 0 K - in 3 pitches! Aided by an insurance RBI from Roberts in the 8th, Qualls allowed a home run to Willingham in the 9th and a single to Willie Harris, but he buckled down to get the next three batters, and nailed down the save to give his new manager his first win.

And so, Max Scherzer remains winless in 13 games to start his career. Dating back to 1961, only 11 other starters have gone winless as long, and nobody had a low ERA like his - but Max has a long way to go to reach the record (20) of Mike Mohler and Bill Caudill. 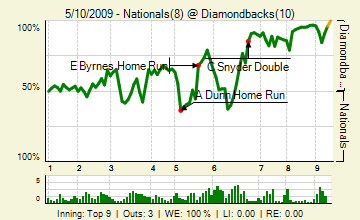 Today was a very good day for the offense - every starter including Max Scherzer had at least one hit, though all three pinch hitters went 0 for 1. 17 hits, 10 runs, 5 walks (3 by Snyder), and only 11 left on base today. (Still double digits - but it's a start!) Hitting with runners in scoring position was drastically improved today (by everybody except Lopez, who left five men on base), though I don't have the exact numbers because Baseball-Reference only updates at night. Roberts had a career day - his first multi-hit game and his first multi-RBI game, and Justin Upton extended his hitting streak to 17 games in the first inning with a single to right (where he ended up at third thanks to an error by Dunn). Nationals phenom Ryan Zimmerman also extended his hitting streak to 28 games; the only game in which he does not have a hit was the second game of the season.

Progress continues to come to the Diamondbacks in baby steps. Cincinnati comes to town tomorrow for a 3-game series. Jon Garland vs Bronson Arroyo on Monday, Dan Haren vs Micah Owings on Tuesday, and Double-A callup Brian Augenstein vs Johnny Cueto on Wednesday.