Rancid to the core. That's the only way to describe Arizona's offensive performance tonight. It was so bad... ["How bad was it?" echoes the peanut-gallery] Well, since 1954, 34,197 teams have scored one or less in a nine-inning game. Just six left sixteen men on base - the Diamondbacks this evening became the seventh, and the first in over eleven years. We got nine walks - again, since 1954, only twice has a National League side had more, while plating one run or less in a regular game. Add up all the individual at-bats for the players, and our hitters left a total of thirty-one men aboard.

Few things summed up the issues facing new manager AJ Hinch better than an incident in the bottom of the fifth. Matt Williams, on the TV commentary, had already speculated how Justin Upton had probably been 'spoken to' for failing to run out a fly-ball in the third. However, worse was to come two innings later: Felipe Lopez grounded to short and, as the throw came across the diamond, slowed to a trot down the line. However, Adam 'The Obelisk' Dunn clanked the throw off his glove - but thanks to Lopez failing to hustle, had time to regroup, and pick the ball up off the dirt for the out. It was an embarrassment - there's no other word for it - and if I were Hinch, Lopez would sit out tomorrow's game, .314 average or not.

I hope it goes further. According to reports, "Hinch said he's passionate about the game and, unlike Melvin, is inclined to show his emotion." If that's the case, then I trust what follows below is a faithful projection of what unfolded inside the Diamondbacks' locker-room after the game. It certainly has a great deal of resonance with our recent feeble performances. Even the team record mentioned - eight games below .500 - is only off by one...

Let's list the litany of missed opportunities the team had tonight:
2nd: Men on corners, one out
3rd: Bases loaded, one out
6th: Second and third, one out
7th: Bases loaded, one out
8th: Second and third, one out
That's five opportunities with a runner on third and only one out. The team failed to get him home safely on any of them, the results instead being four ground-outs and a swinging strikeout. Well, three infield ground-outs, plus the one that left us feeling worst in the seventh, where Josh Whitesell managed to ground-out to right-field. The ball landed just in front of Kearns there, and the man on third, Lopez, couldn't go too far off the base in case it was caught on the fly, but couldn't stay at third because there was someone coming down from second. Kearns unleashed a bolt and their catcher just managed to keep his foot on the bag, getting Lopez on the force-play at home.

It was almost comical the ways we managed to find not to score, after getting the leadoff man aboard five times. If my math is right, we were 1-for-13 with runners in scoring position this evening, making our total a resounding 4-for-59. On the other hand, we are 3-for-26 with RISP in the Hinch era, compared to 0-for-25 at the end of the Melvin era, so he clearly deserves credit for that. See? Who said he couldn't manage? [Apart from the eight billion people to be found soundly lambasting the decision on azcentral.com] Positives from the offense? Eric Byrnes: two hits. Mark Reynolds: three walks, though also committed a pair of errors. Lopez, Chris Young and Upton: a hit and a walk each, the last-named extending his hitting streak to sixteen games.

Another fine effort by the pitching staff wasted; Doug Davis went six innings, and allowed only four hits and one run, that coming on another solo-shot by Adam Dunn. He could probably have gone further, having thrown only 91 pitches - however, he was lifted for pinch-hitter Conor Jackson in the bottom of the sixth, with the bases-loaded. With the benefit of hindsight, we'd have done no worse to leave him in. It was the seventh loss this season by a Diamondbacks' starter who allowed two earned runs or less - no other team in the major has seen their rotation suffer more than four such defeats. For Arizona, Dan Haren has three of them, while Davis and Max Scherzer own a pair each.

Juan Gutierrez, Scott Schoeneweis and Chad Qualls polished off the rest of the game, with another solo shot, off Gutierrez, the only damage - that extended Ryan Zimmerman's hitting streak to an impressive 27 games. Justin Upton, eat your heart out...for the moment, anyway! [Hey, we can but hope] It's the longest in the majors since Moises Alou hit in 30 straight games for the Mets in late 2007. In case you're wondering where Upton's streak stands in Diamondbacks' franchise history, it's currently tied for ninth - Stephen Drew had a 17-game run last year, so if Upton keeps it going tomorrow, I'll do a special post-game post looking at hit streaks, both for players his age, and by our guys, as he'll be entering some rarefied territory.

Finally, towards the end of the game - I think it was after we'd left the bases loaded and failed to score in back-to-back innings - there was a shot of new manager AJ Hinch in the dugout, wearing what can only be described as a thousand-yard stare. I can imagine him silently mimicking Josh Byrnes: "Come out to the desert, we'll get together, have a few laughs. You can manage the Diamondbacks!" Welcome to Arizona, AJ. Now you know what a TV dinner feels like. 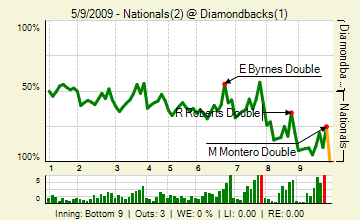 A lively thread, though a game I'm sure we'd do well to forget, as we try to avoid the sweep at home by the Nationals tomorrow... I can't believe I just needed to write that phrase. Ugh. Anyway, pyromnc and snakebitten were the main drivers of comments, with 111 and 92 for them respectively. Also present: Brendan Scolari, snakecharmer, Tooch27, TwinnerA, SeanMillerSavior, Wimb, Muu, Azreous, luckycc, damdrs1717, J Up, ASUJon, unnamedDBacksfan, hotclaws, sayheyupton, IndyDBack, westofrome (welcome, and see below for a definitive answer to the "fielder's choice" thing for you soon!) and venomfan.

No post-game audio as yet: probably no big deal, since I imagine it just consists of AJ Hinch sighing regretfully for ten minutes. I'll update in the morning if and when it shows up.

Here's the answer from one of the official D-backs scorers, Gary Rausch, regarding the scoring on the play to the outfield, and whether it should have been a hit for Whitesell. This is what he says:

While Rule 10.05 (a) deals with a number of instances when a scorer shall credit a batter a base hit, 10.05 (b) is the opposite.  "The official scorer shall not credit a base hit when a:  (1) runner is forced out by a batted ball, ..." So many of baseball's scoring rules still leave too much gray area.  Fortunately, this one is clearly defined at the top.

In my opinion tonight's play is not that much different than a one-hopper to the third baseman with the bases loaded.  He comes home for the force.  In this case Whitesell's ball flew a lot further before taking its first hop. Being a tight game and following the old adage that you always go after the lead runner, the OF threw to the plate for the forceout.

We see more of these type of plays when, with a runner on first, the batter bloops a ball to rightfield.  The runner goes halfway and is gunned down when the RF makes a quick pick-and-throw to the shortstop covering second base.  The runner is forced and the batter is denied a hit.  Seems unfair, but the rule is very clear in this case.

Thanks to him for the details. So now we know! And here is the post-game audio clippage, from Davis, Upton and Hinch. Our manager used the word 'grind' again: couldn't we have fired that expression along with Melvin?