Diamondbacks 1, Brewers 4: The Girl Who Loved Tom Gordon is sobbing...

Share All sharing options for: Diamondbacks 1, Brewers 4: The Girl Who Loved Tom Gordon is sobbing... 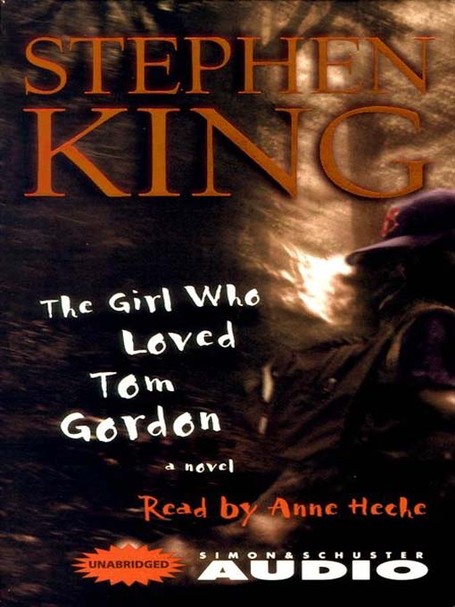 One might think that if you insert a pitcher making his first meaningful appearance since last July [I discount Tuesday's game, where we were down by eight], it might behoove a manager to have some kind of contingency plan. Y'know, just in case said pitcher goes walk, wild pitch, single, groundout, wild pitch, walk, single, walk to score the tying run and load the bases with one out? Apparently not, going by the time it took Bob Melvin to get anyone with a pulse up and warming in our bullpen. Meanwhile, Tom Gordon delivered a performance fully deserving of a place in one of Stephen King's more explicitly nasty horror stories.

One might also think that after your LOOGY comes in and walks in the go-ahead run, that you might take said LOOGY out. Because, after all, in the last two seasons, he has an OPS 407 and 435 points worse against RHB. So it would surely be folly - and I'm just speculating wildly here - to leave him in there to face a right-handed batter with the bases loaded. Again, it would appear that such a decision is not in the Melvin Manual of Managerial Misconduct. Instead, the very first pitch Scott Schoeneweis threw to Mike Cameron was deposited, on one bounce, into the bleachers, for a two-run ground-rule double.

I'm getting tired of pointing out these kind of thing things, apparently obvious to everyone in Arizona fandom - certainly, everyone here at the 'Pit. It's hard enough for the Diamondbacks to win games, when our entire productive offense is a solo homer from the first batter of the game. However, Max Scherzer made that stand up with six shutout inning: not that Melvin could be bothered to get anyone up in the bullpen, even while Scherzer was setting a new career high in pitches, reaching 107. But everything crumpled in a monumentally bad seventh inning, as Melvin's chief tactic was apparently to cross his fingers and hope Gordon would remember how to pitch. The time to yank Gordon should have been after a smart play by Chad Tracy, running from first almost all the way to third to tag out the runner there. That was the save situation, right there, with men on first and second, but one out and Arizona still ahead.

Instead, Gordon was left in, until the situation became completely untenable. By the time Juan Gutierrez was finally allowed to take the mound, the lead was gone and the bases were still loaded. He pitched beautifully, getting the ever-dangerous Ryan Braun to swing and miss strike three. Melvin then went to Schoeneweis to face Prince Fielder, who walked on five pitches: hey, right decision, wrong result. But leaving PrettyWhite in to face Cameron? We need a reporter willing to ask in the post-game conference: "Bob, seriously: WTF were you thinking there?" [Nick P, you are tasked...] That took an already difficult task and made it basically impossible, what with the all-time saves leader looming in the Brewers' bullpen for the ninth. Anyone can manage a blowout: it's in close games that you see what a manager is made of. And apparently, Melvin's main ingredient is FAIL.

Poor Max Scherzer? What does he have to do to get his first win in the majors? [Well, except for the obvious - which would end in Frances McDormand uttering the phrase, "And I guess that was your set-up man in the wood-chipper, eh?"] For it appears six innings of shutout ball just isn't good enough. It was something of an illustration of why at the moment, I'm not convinced he's best suited for the rotation: his first time through the rotation was regal, including the back-to-back strikeouts of Corey Hart, Braun, Fielder and Cameron - not exactly rookies. He struck out five that time through, but the second go-around was very much harder: only two K's, and the Brewers had a lot of extended at-bats including a 26-pitch fourth that went a long way towards making Scherzer's last inning uncharted territory. Still, can't argue with the results. Maybe the twelfth start will be the charm. Get 'em next time, tiger.

The offense. Outside of Felipe Lopez - two hits, and unjustly robbed of a third by a bad umpiring call to end the eighth - there was none to speak of. We only had three at-bats the entire game with anyone in scoring position, and one of those was with Scherzer at the plate. The other two came in the seventh, after Conor Jackson doubled with one out: Justin Upton and Chris Snyder couldn't get the ball out of the infield, and that was it. We weren't helped in other innings by Upton getting picked off first-base and Lopez being caught stealing second, or by the team's collective failure to muster a single walk or more than the one run, off a pitcher who came in with a 7.32 ERA and 12 walks in 19.2 innings. I guess we used our quota of both for the week in yesterday's blowout over the Cubs, and will have to wait for a fresh delivery. Hope it's coming FedEx. 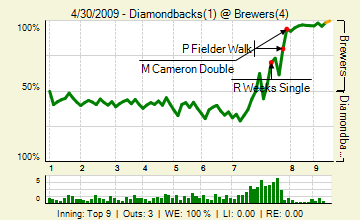 No surprises there, I imagine. Busy Gameday Thread, though it all went a bit pear-shaped after the seventh - there's some bickering still going on as I write, but this was not the kind of game to leave you glowing with kind feelings towards your fellow man. kishi (82) grabbed the runners-up spot behind 'Skins. Also present were friendly visiting fan TrueBlueBrewBlog, hotclaws, soco, mrssoco, venomfan, Snake Bitten, sb24ws2005, AJforAZ, luckycc, Muu, snakecharmer, Diamondhacks, IHateSouthBend, J Up, Sprankton, emilylovesthedbacks, TwinnerA, NewJackCity, Wimb, 4 Corners Fan, Scrbl, Azreous, Ridster09 and Lisalisa8.

Minor note worth applauding. The Diamondbacks have not committed an error in their past eight games. Now some of that may be down to some 'friendly' home scoring, but it does seem they have tightened up of late - there was a very nice piece of work tonight between Josh Wilson, getting his first start with the team [and he may get more, as Augie has apparently a bit of a groin issue] and Lopez. The team record for errorless games is nine, most recently in September 2005.

[Audio Update I can't hear these - no speakers on this PC - but I'm sure they are fascinating. Clips from Melvin, Gordon and Scherzer. Mrs. SnakePit saw Max being interviewed and reckoned, though he was saying all the 'right' things, that our starter was pissed. Can't blame him. I'm sure Dan Haren can sympathize...]