It may have taken vicious, sadistic threats of violence to defenseless baby critters in the preview - but, dammit, it worked. The slumbering Diamondbacks offense kicked itself into life, with most of the energy coming off the bench, as our pinch-hitters delivered two homers and drove in five runs. But it was our two most maligned starters who played crucial roles: Justin Upton got his first hit of the season in the tenth, and Eric Byrnes - hitting .059 to that point this year - drove in Upton with two outs in the tenth to give the Diamondbacks a heart-stopping, desperately needed victory. Details after the jump: it's a epic...

This was a win which seemed more than unlikely at various points throughout the game. After the teams traded zeros for the first three innings, the Cardinals leaped out to a 3-0 lead in the fourth, as Max Scherzer wobbled, and our Win Probability sunk as low as 16.6%. However, in the bottom of the fifth, our first bit of heroics came off the bench: Mark Reynolds batted for Scherzer and swatted his first home-run of the year, to pull the Diamondbacks within one run. That was only the second time Reynolds has reached base safely as a pinch-hitter: remarkably, the other occasion also involved him leaving the park, that home-run coming off the Dodgers' Chad Billingsley on June 26, 2007. Mark is now 2-for-11 as a PH, with two HR and 6 strikeouts: truly, Reynolds lives up to his Special K nickname there.

Dear Bob Melvin. I thought we had agreed: at this point, Jon Rauch is not to be used in games that we have any interest in winning. Such as one-run contests. So, pray tell, what was doing pitching the sixth inning with the Cardinals ahead by a single score? Doubling their lead, that's what, thanks to a walk, Jadier Molina's first stolen base since July 2007, a single and a wild-pitch. Even though a bloop single from Stephen Drew brought us back to within one, it looked likely that Rauch's run allowed would prove to be the margin of victory. The wasted chances of the first three innings - Arizona got a leadoff hit each time, but never got a man past second - seemed destined to haunt us, as the clock ticked down and the outs ran out.

We entered the eighth and the first two batters died meekly, Tony Clark grounding out and Young popping out (Clark has returned to expected form after Opening Day, and is 1-for-10 with no walks or extra-base hits since then). But Miguel Montero walked and Justin Upton was hit on a full-count pitch, to bring Conor Jackson to the plate as a pinch-hitter. Not exactly a great track record there either - 5-for-39, a .128 average - and, as frequently noted, he hadn't hit a home-run in forever. 229 at-bats, to be exact, going all the way back to July 27th last year. So, what better time for CoJack to connect, driving the ball to deep-left and giving Arizona a hugely-unexpected 6-4 lead, which they could turn over to Chad Qualls.

The E-Qualls-izer hadn't allowed a run in almost as long as Jackson's drought, the last such being on August 27th. But after Thurston dropped down a perfect bunt with one down, Qualls seemed to go to pieces. He started over-throwing the ball - which meant that, rather than his pitches being kept down and dropping further, they stayed up and flattened out nicely. Thurston was the first of five straight Cardinals' batters to reach base safely, on four singles and a walk. The lead evaporated, and after Pujols singled home the tying run, St. Louis still had the bases-loaded and only one out. Fortunately, Qualls suddenly remembered how to pitch and got back-to-back strikeouts to end the threat, but victory in regulation was to elude the Diamondbacks.

We did have a great chance to take it right back in the bottom of the ninth, when Stephen Drew tripled off the centerfield wall with one out, but neither Snyder nor Young could bring him home. Instead, we entered bonus baseball, and while the Cardinals had their chances in the tenth after a lead-off single against Tony Peña, he stranded the runner at second. However, we had run out of position players, meaning Peña had to hit for himself, his first trip to the plate since August 2007. With men on first and second, he tried to get down a bunt, but last night's villain, Brian Barden, was right on top of him and just got the force on Augie Ojeda at third. Felipe Lopez grounded into a fielder's choice, advancing Upton to third, which brought up Byrnes. He'd been booed mercilessly after popping out foul with one done and men on the corners in the seventh, but finally got a big hit, singling to left to snatch victory from the jaws of a defeat, itself snatched from the jaws of victory.

Lost in all the kerfuffle was a decent performance by Max Scherzer, who pitched five innings, allowing three runs on five hits and two walks - albeit with only one strikeout. He did lose it somewhat in the fourth frame, giving the Cardinals three extra-base hits, but all told, he looked pretty impressive. And, while I'm never one to wish ill on anyone, it's probably no bad thing Chris Carpenter was forced to leave the game, having apparently done something to his side while warming up. We had no real success against him, and as noted in the series preview, the Cardinals bullpen proved a weakness - we scored all our seven runs in their 6.2 innings of work. On the Diamondbacks' end, credit to Doug Slaten and Juan Gutierrez for pitching clean seventh and eighth innings. 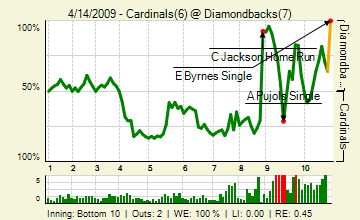 Yes, pretty much everyone gets mentioned one way or another tonight - nine position players and two pitchers added or subtracted more than 14% to the final tally, which has to be close to an all-time high. Oddly, Lopez, who had three hits, wasn't among them - his knocks being largely countered by the three outs he made. Drew had two hits, and Tracy a hit and a walk, but it was a struggle for the bottom half of the order: Clark, Young, Montero and Upton were 2-for-16 combined. Four walks and five strikeouts for Arizona; we'll take that ratio, and we even had multiple hits with runners in scoring position, so that's something we will hopefully keep up.

Word from my sources is that Eric Byrnes "blew the media off" in the Diamondbacks clubhouse this evening, leaving without speaking to reporters. Not quite sure what the point of that might be: maybe he was worried they would ask about the torrent of boos that greeted his seventh-inning failure, rather than the tenth-inning success. It may be the first time I've heard of Byrnes turning away from the media... Still, no shortage of happy Diamondbacks, who were more than delighted to talk about tonight's game. Here's what a clearly-delighted Justin Upton, and also Conor Jackson, had to say about the comeback victory.

The D-backs did make a roster move before the game, sending Billy Buckner down to Reno, to make room for Scherzer. Bobby Korecky therefore gets to stay for now: he warmed up in the ninth inning, but didn't get into the game [I suspect he may well have done, had Qualls not held on to the lead]. It was also announced that the team would be skipping Petit's next start, which they can do thanks to the off-day Thursday. Dan Haren will move up to pitch Friday, on regular rest, and this means that Jon Garland will be the starter for MiniSnakePitFest at Chase Field on Monday.

Day game tomorrow, so remember that - 12.40pm first pitch, Arizona time. azreous will be on the recap for that: for his sake, hopefully not quite as lengthy as this one needed to be! I'm ready for bed, but first have to go find some more baby animals to threaten: after all, it proved so effective this evening!