Report From Behind Enemy Lines

Share All sharing options for: Report From Behind Enemy Lines 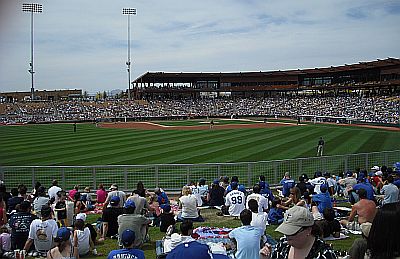 I should point out that I did not, of course, pay to go see the Dodgers take on the Padres at Camelback Ranch this afternoon. Please: I do have some standards [though if you've seen our DVD collection, you might argue] Mrs. SnakePit scored a bunch of free tickets to Sunday's contest. Now, of course, I'd far rather they be to go see the Diamondbacks, but the Scotsman in me is loathe to pass up a free baseball game. So, proudly strapping on my finest Arizona gear, we prised ourselves out of bed at the unholy (for a Sunday) hour of 9 am, and headed round the 101 to Camelback, with the plan of some pre-game tailgating, in honor of my mother-in-law's birthday. 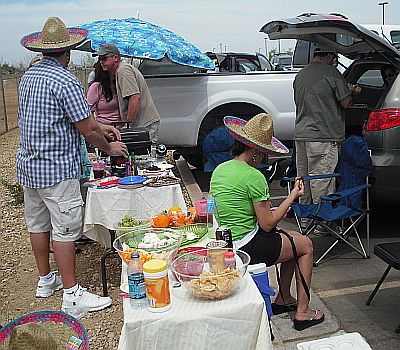 The last barbecue before entering the fray.

We were very surprised how busy it was there: our previous tailgate, down at Tucson, we arrived about 11 am too, and we almost the only ones in the parking lot at the time. Not so at Camelback Ranch, where there were already plenty of cars present. Many thanks go to the car-park monitors in our section there, who helped us keep a little section clear, until all the four cars of our posse had arrived. Mrs. SnakePit had bought a little propane grill, which once we'd got past some initial hiccups (the phrase "some assembly required" will make her blanch for quite a while, I suspect), proved very successful: hot-dogs, hamburgers and chicken wings were duly consumed. 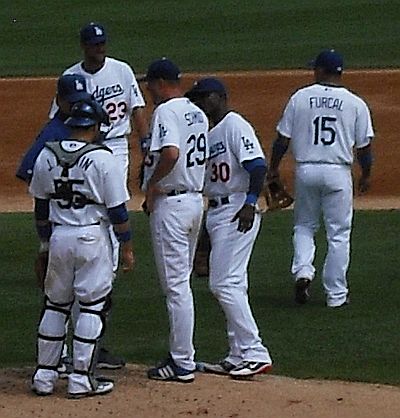 We made our way inside - it occupies a good chunk of real-estate, so that took some time, but gave us a chance to see the other fields located around the complex. I believe it's going to be a pretty enormous facility once it's completed, with the aim of it being used all-year round rather than just for spring training. Dodgers fans were in the great majority, most of them wearing #99 shirts: I did see a couple of other (fool)hardy souls in D-backs gear, but though I got some stares, the only exchange was a good-natured one with an LA fan who pointed out Tucson was that way, and this was Glendale. 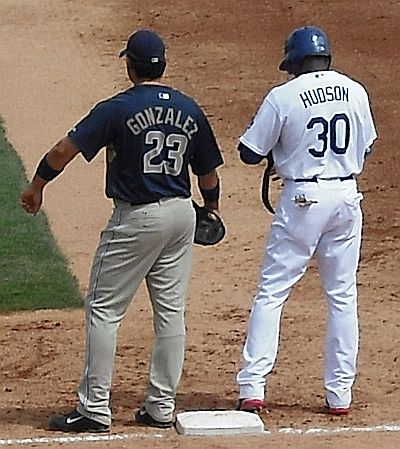 No shortage of familiar faces, however, on both teams. Definitely a little odd seeing Orlando Hudson (above) in blue, while Scott Hairston and David Eckstein were in the starting line-up for San Diego. O-Dawg had a couple of hits, while Eckstein and Hairston each got a knock. Jason Schmidt started for the Dodgers, which was odd, since I thought he'd been ruled out of contention for the fifth spot in the rotation. Certainly, nothing today to challenge that, as he allowed three hits, three walks and three earned runs in 3.1 innings, as the Padres made their way to a 6-0 lead by the middle of the fourth, and largely cruised thereafter. We adopted standard Dodger fan procedure, and left in the middle of the seventh. :-) 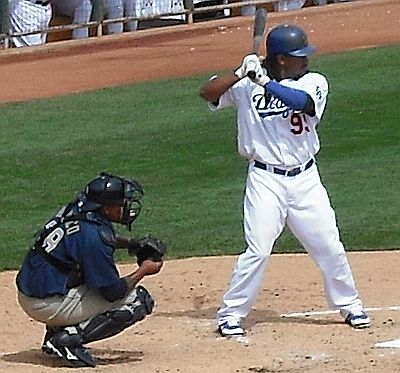 The face of pure, undiluted evil...

Our tickets were originally for the lawn in outfield, but we opted for the five-finger upgrade package - which proved remarkably easy, thanks to the near-total lack of security personnel, as we first slid into the outfield bleachers, before ending up in Section 122, the $28 seats. We could probably have gone further down, but these seats offered a perfect combination of shade and breeze. Though I'm not sure where the box-score got the wind-speed figure of "3 mph, out to LF" - it was certainly a good deal stronger than that in Section 122, to the extent that Mrs. SnakePit's cap persisted in depositing itself in the row behind. I was a little disappointed with the way the surrounding landscape was almost hidden from the stands - there was no real sense of 'location' for the park, which could have been anywhere in the Western USA. 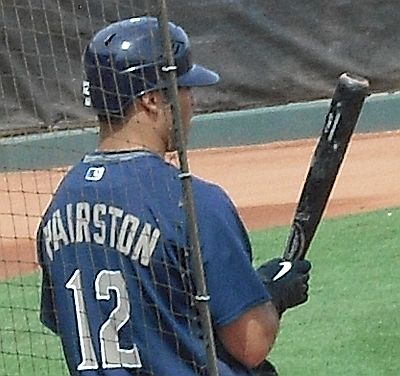 The rest of our party had already departed, and we were thinking of doing the same, when I felt a tap on my shoulder, and a voice said, "Are you Jim McLennan?" I prepared myself to dive to the floor and avoid the hail of bullets which was bound to ensue. Fortunately, it was Eric Stephen of True Blue LA, who had driven out from California for the weekend, and had spotted my SnakePit jersey. Small world. We chatted about prospects and the upcoming season for a little bit - that's another one of the SB Nation baseball blogs I can cross off my list as having met in person! 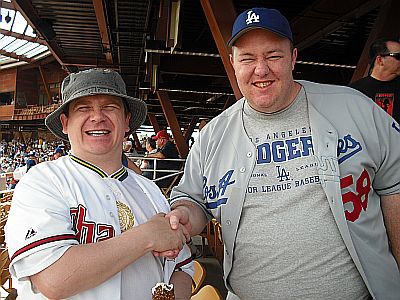 Now, shake hands and come out fighting... Eric and I try out our angry faces.

As noted, we didn't hang around too long, opting to beat the traffic and head on for the second half of the day's entertainment, our Peelander-Z show. Indeed, I'm currently writing this up in a La Quinta inn, while we wait for the band to show up! If I can find some more wi-fi, a report on the Diamondbacks game will follow a little later this evening, otherwise, that'll get done tomorrow.