This is the kind of book which reminds me why I love baseball; a basically simple game, it's one that demands and repays analysis more than any other pastime - except perhaps chess. This is 400 pages of such analysis, with barely a mention of hitting or pitching, except as it relates to the matter at hand. Can you imagine this being possible elsewhere? I can't see them any NFL writer coming up with 400 pages of original research on, say, special teams, or an NHL group doing so for killing the power-play. But baseball seems to have a limitless frontier: there's always one more bridge to cross towards fuller understanding of the game.

Regular readers will be aware of my recent interest on the topic of how to measure fielding ability, and will (hopefully) remember my three-part series on defensive numbers, that ran here around Christmas:
Fielding Metrics, Part 1: From the ground(ball) up
Fielding Metrics, Part 2: Hacking Into the Jungle
Fielding Metrics, Part 3: To Infinity, and Beyoncé!
It's probably a good thing I didn't get this book while writing those articles, or else the series would probably still be going on, two months later. To describe it as a mine of information, would be like calling the Grand Canyon a good-sized hole in the ground. I've been dipping into it for about two weeks, and I'm still not half-way through it. But I'd better get this review up, since Volume 3 will probably be due out before I've finished thumbing my way through this. Details after the jump...

The original Fielding Bible came out three years ago, and helped introduce us to the Plus/Minus system of defensive measurement. Basically, that's the number of balls a player gets to, over or under, those that would be reached by a league average one. For example, a groundball hit to a certain location is converted into an out by the shortstop 76.4% of the time. If Stephen Drew makes the play, he gets credit for the balance, 0.236 - if he doesn't, he gets a debit of -0.764. Baseball Info Solutions monitor every play, categorizing by type of hit (flyball, liner, etc.) and location, so that these numbers can be worked out for every player.

This was discussed in part 2, but the book goes into more detail, converts the number to runs saved, and also gives numbers over the past three years. This shows us that, while Conor Jackson's work at first remained poor overall, his runs saved improved from 31st in the majors for 2006, to 26th in 2007 and 24th last season. They rank the top 35 players by innings played at each position. Here are the rankings for the other D-backs: Hudson #25; Reynolds #30; Drew #23; Jackson in LF #4; Byrnes #23; Young #8; Upton #13; Snyder #9.

If that was all the book had, it would be valuable, but it's barely scratching the surface. Next up is the concept of defensive misplays: a tougher assessment that expands beyond errors to include other gaffes. For example, Mark Reynolds, in addition to his league-leading error number, was charged with 33 defensive misplays, that were not scored as an E:

I'm not particularly picking on Mark here, but he was listed as an example in the book to show the sort of thing categorized as defensive misplays. Similarly, there are good fielding plays - things like when the first-baseman bails out a team-mate by handling a poor throw, or an outfielder holding a batter to a single on what looks like an extra-base hit. Again, you can compare these with the misplays, and see what the numbers show. When you do that, and adjust for the number of chances, two Diamondbacks led the majors: Orlando Hudson at second and - this is probably a surprise - Eric Byrnes in LF.

Dammit, I'm only up to page 62. I'm going to stop detailing and just whizz through things for a bit, picking out some section of particular interest. Pitcher defense; how catchers interact with pitchers; defensive positioning. The last-named contains examples of the charts BIS supply to clubs to show hitter tendencies, and make recommendation on how fielders should be position. For example, Jim Thome is an extreme pull hitter on ground balls, and it'd make sense to put the shift on there; however, in the outfield, most of his hits go the other way, with the left-field corner the most common destination. It's completely fascinating stuff.

That's as far as I've actually read in detail, but I have no problem flicking ahead to see how it ends. I'm particularly looking forward to the McLouth vs. Gomez chapter which analyzes the Gold Glove given to the former, apparently in denial of the objective evidence. The middle chunk is the Six-Year Register, with data back to 2003 for all players with at least 250 innings played last season, followed by Defensive Scouting Reports. Some grounds for optimism on Special K there, as that says of our third-baseman, "If Reynolds works at his issues, they are fixable. He has the tools to be a dependable defender."

Not yet there in 2008 though. The book analyzes defensive replacements and finds the two Diamondbacks who were taken out most often for that reason: you won't be surprised to learn they were Reynolds and Justin Upton, though even the former's seven removals is well short of the league leader, who is the Phillies' Pat Burrell on an amazing 23. Reynolds' work on bunts is also found barely adequate, getting a C grade, while Jackson got a B- and Chad Tracy a C+ for their handling of them, on the other side of the diamond.

Ok. I could go on, but I trust the basic point is clear: Buy This. I can't think of a single volume published in the last few years that will give you a better appreciation of the game, in the way this one potentially can. There is math involved, yes, but unlike say The Book, you don't have to be a stathead in order to get through it. You'll come out the other side with a clearer understanding of defense and how it works, as well as the way it factors into intelligent management, both during the game and in roster construction. Now, if you'll excuse me, I want to go study it some more... 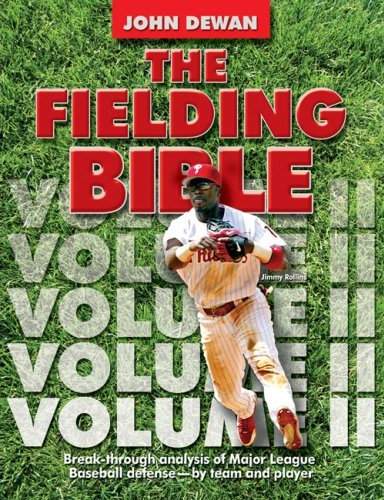