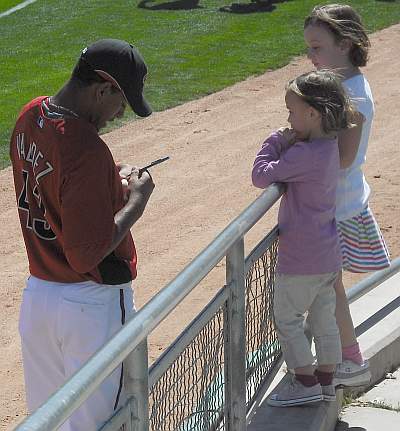 "Is there a heaven?"

"Oh, yeah. It's the place where dreams come true."
"Maybe this is heaven."
Field of Dreams

If the above picture is not an affirmation of all that is good and true about the sport, its players and those who follow the game... It's close. I've little doubt the children don't have the slightest clue who Cesar Valdez is; but he plays baseball and that's enough to make him a star in their eyes. The look on their faces as they ran back to their father with the autographed ball was a reminder of why I love the game so much. In an era where the latest steroid revelations seem to rock baseball on an almost daily basis, it's good to get back to the basics. The grass is green, the breeze is warm and the drinks cold: let's play ball!

We abandoned the original plan to drive down the night before, so headed off early Sunday morning. We managed to negotiate the roadworks in the middle of town, which must be due for completion any millennium soon, I'm sure, and rolled into Tucson Electric Park around eleven. A few minutes later, our tailgating partners - shoe, TAP and Tmar - showed up, and with the arrival of The Shadow, bearing Diamond Dogs for all, from the nearest Circle K, we were all set. The discussion was free, wide-ranging and interrupted only by consumption of Mrs. SnakePit's tortilla wraps. :-)

Of particular note, I was talking to shoe about spring training stats: he thinks it might be interesting to break the actual results by inning: say, see who was leading the game after five innings in the first two weeks, maybe the sixth inning in week three, and so on, because after that point, it's usually the B-roster who are out there. There might then be a better correlation between that and regular season records. He also reckons Chris Burke was 'cheating' in spring training, sitting on the fastball, which is all pitchers tend to throw early on. As soon as they started to mix in the breaking stuff, his effectiveness vanished. Something to keep an eye on, though I haven't seen him in a Padres lineup yet. 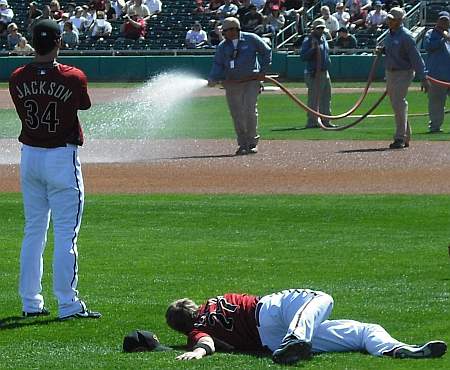 [Jackson and Reynolds warm up]

Around 12:30, we made our way inside: our seats were down the first-base line, and I bumped into Driaz as I swung back, after taking the above pics of the team warming up. Not actually as big a crowd as I thought there might be, for a Sunday game; it's probably another reason why the Diamondbacks are looking to leave Tucson. Here are the attendance numbers for all the Cactus League games this afternoon:

On a glorious spring day, the home-state Diamondbacks managed to outdraw only two American League match-ups, including one contest which was basically taking place in the middle of nowhere - no offense, Surprise. You'd think with the team threatening to leave, people would be showing up in droves to prove the viability of Tucson as a spring training location. But when you can't even get five thousand to the park, you have to wonder whether the town has simply given up the fight 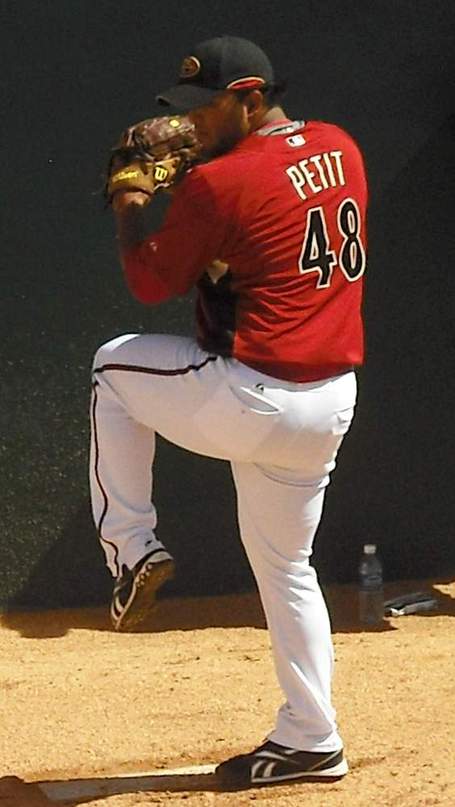 Starting the game for the Diamondbacks this afternoon was Yusmeiro Petit, and he was in midseason form already, performing feats of escapology previously only performed by Houdini. And Orlando Hernandez. Take the first inning, where he walked the leadoff batter, allowed a single to left to the next man, and then uncorked a wild pitch, to put men on second and third with no outs. I expected a call from shoe, saying something along the lines of "Told you so." But Petit - as he did much of last year - defied expectation. A shallow pop-up to our heavily-tattooed second-baseman, Ryan Roberts, a strikeout and a groundout kept the A's off the board.

Second verse...same as the first. Leadoff walk and another single put men on the corners with nobody out, but again, the A's couldn't even squeeze one run over - a strike 'em out, throw 'em out double-play proved key in the second. Petit left with two scoreless innings, despite two hits and two walks, and got the W. I can't say he looked particularly convincing, but there's no arguing with the box-score this afternoon, and Bob Melvin took it: "Early on, he really had trouble getting the ball down, and typically that's when he has his share of troubles. End result is what you're looking for, and he didn't give anything up." Whether Petit is capable of producing the same in the regular season, I'm not so certain. Here's the wild-pitch and the ground-out which started the comeback.

Interestingly, pitching for the A's was a former master of the long-ball for the Diamondbacks, Edgar Gonzalez. It was clear from the first batter he faced that he would not be so lucky, Roberts flipping a dying quail into the Bermuda Triangle beyond the infield. One out later, Stephen Drew ripped a double over the head of the left-fielder to give Arizona the lead, and with two outs, Chad Tracy singled to bring Drew home and make the score 2-0 for the Diamondbacks. Our boys certainly had their share of luck today, with at least three hits, like Roberts', dropping with perfect precision among converging A's fielders, and they got help from two Oakland errors.

While technically there were no errors ascribed to Arizona today, we seemed to have extraordinary trouble turning the double-play. Before we finally got one to end the game, there were at least three which should have been converted: as they all resulted in one out, no errors were allocated, but the last was particularly painful. A fine pivot and a solid throw to first in plenty of time, was followed by the ball clanking off Josh Whitesell's glove with a resounding 'BONK!' Someone - who might have been me - yelled, "If we need that kind of thing, we've got Tony Clark." Speaking of whom, he looked totally adrift at the plate today, going 0-for-3 with a strikeout. Glove notwithstanding, I expect him to be replaced by Josh Whitesell before the All-Star break. 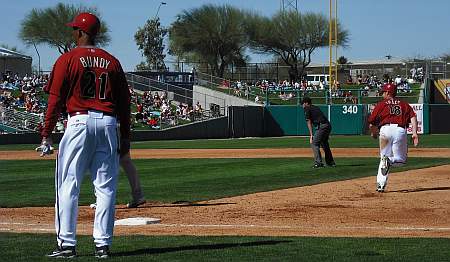 [Tracy takes off for second-base]

Arizona tacked on three more runs in the fourth, thanks in part to those Oakland errors, and were looking set to cruise to an easy victory. Cesar Valdez, seemed a little shaky immediately after relieving Billy Buckner, giving up a solo home-run to lead off the A's fifth. However, he settled down, fanning three in his two innings of work, and the Diamondbacks - now running their B-roster out there - added on in the bottom of the sixth, making the score at that point 9-2 to Arizona. We looked forward to a quick exit from TEP. Some more slices of tortilla wrap? Don't mind if I do. However, Brooks Brown had other ideas...

In his defense, he was the victim of some bad luck. A bad-hop took the ball over the third-baseman's glove and put the leadoff hitter on base for Oakland. Browns should have taken the hint and feigned some kind of injury because that was the shape of things to come for him. He ended up with a line of five hits, one walk, five runs, all earned, in one-third of an inning of work. Ouch. That'll sting. Perhaps the most painful was the bases-loaded squibber that trickled about ten feet in front of the plate, leaving catcher John Hester floundering and unable to get anyone out. 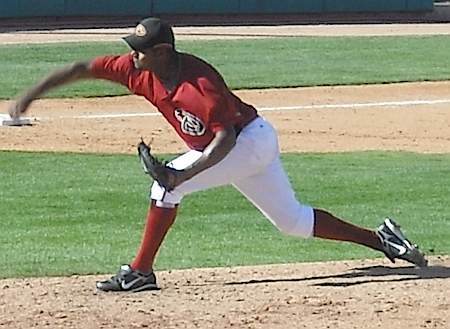 Brooks was eventually rescued by Jose Marte, of whom Nick Piecoro said last week, "An excellent, if unintentional, impression of former Diamondbacks closer Jose Valverde. From his pulled-up socks to his mannerisms on the mound to his skyward point after recording the final out of Thursday's win in Goodyear, all was Valverde-esque... The only thing Marte lacks is Valverde's waistline." Having now seen Marte in action, I concur: there is a strong resemblance, and his performance this afternoon was very solid. Coming in with the bases loaded and one out in the seventh, he allowed only a run-scoring groundout, and then added a scoreless eighth for good measure.

Leo Rosales pitched the ninth and we finally turned a double-play, which ended things and sent the Diamondbacks fans home happy. On the offensive side, Brandon Watson, getting the start in center, had three hits, including a delightful little bunt which took the Oakland pitcher by surprise. Roberts had two hits, while Tracy and Reynolds each had a hit and a walk. Eight separate Arizona players had runs batted in, which is probably an accurate assessment of how our offense is going to be looking to get things done this season. 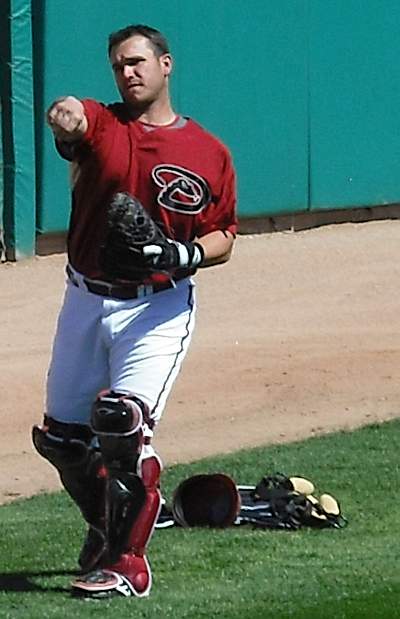 We headed back to the parking-lot, and The Shadow invited us to a BBQ at his house in Tucson. We had to decline, because I wanted to get this report up and posted as soon as possible, and we still had a  two-hour drive back to North Phoenix. You see the sacrifices I make for you people? :-) But it was a very pleasant day; having seen actual, live baseball we now truly feel that the winter is over, and the real season can't start soon enough. Might be a while until I can see a tortilla wrap, however...

In other news, Brandon Webb's bullpen session went fine, a huge relief to all. "I felt real good today. I felt great. Almost 100 percent, I’d say. I had no problems warming up. I threw every pitch, fastball, change-up, curveball... I wasn’t too concerned about it from the start. But today was encouraging. I felt real good about it. I’m ready to go." He'll therefore be making his next start on Wednesday, as scheduled, against Team Mexico, though he probably won't throw more than about 30 pitches or a couple of innings, whichever comes first. Before then, however: guess who'll be starting for the Giants when we face them in Scottsdale on Tuesday? Yep. Randy Johnson. Might be worth taking the afternoon off for that one...

[Snakes on the grass... Click to enlarge
All photos by AZ SnakePit]