Share All sharing options for: Fest Side Story: the Diamondbacks Fan Festival

If the event originally looked a bit shaky, with the SnakePitMobile having had issues and a gloomy weather forecast, everything turned out alright on the day. Our car ran smoothly and the anticipated rain held off, with the weather being perfect for the Diamondbacks' annual Fan Fest at Chase Field on Saturday. Actually, scratch that, and make it on Chase Field: this time, instead of the activities and action being mostly up in the concourse, they were down on the field itself. You could walk over virtually the entire park, from roaming the expanses of center, to trying to work out where Gonzo's bloop single dropped in 2001, so you could kiss the earth. I'd have thought they'd have a small plaque on the spot - or perhaps a gravestone, marking the death of the MFY dynasty. 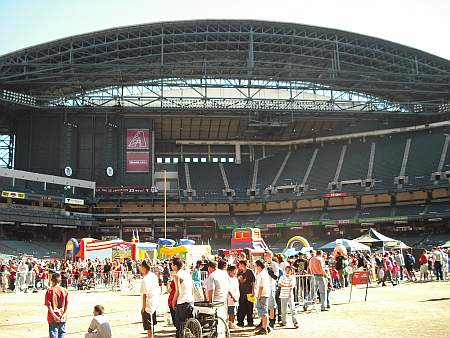 Anyway, I'll tell you this: the park looks a lot bigger when you are down on it. I have a new appreciation for the outfielders, understanding a bit better now how much territory they have to cover, and how difficult a job that is. Especially given what appeared to be a sand-pit in one section of right-field [below] - I just missed a pic of two kids literally building castles there. I know Justin Upton is young, but... Definitely some work left for the grounds-crew between now and Opening Day. Having ten thousand people marching over it today probably won't have helped. 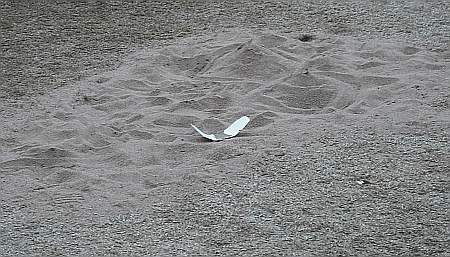 The turnout looked impressive: if hard to gauge because of the change in location, there were certainly no shortage of people milling around on the field, around the stands and in the concourse. Mostly families - a lot of kids - and notably less purple than at last season's event, though I did still see a couple of die-hards doing their best Barney impressions. TAP and shoe were bumped into, but we arrived just too late for the Q+A with Messrs. Hall, Melvin and Byrnes. According to TAP, there seemed a difference of opinion on the role of Conor Jackson, with the GM seeing him changing positions, while the manager saw him as the everyday LF. Subsequent comments from CoJack during a KTAR interview [he and Chris Young are shown below] seemed to suggest he'd prefer the latter approach. 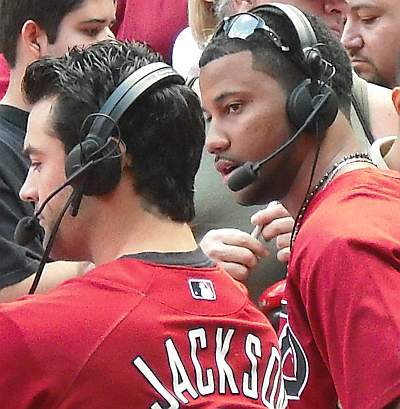 We didn't bother with the clubhouse tour this time; we did that last season, and once you've seen one Conor Jackson jock-strap, you've seen 'em all. Er, I imagine. Similarly, the autograph and photo lines were long and entirely untroubled by Mrs. SnakePit and I. I've got a feeling that such things are probably not exactly the favorite events of the players. In their shoes, while meeting those who support the team is part of the job, and could still be fun, this seems like the factory-farm version of fan interaction. Suspect there's probably a team employee lurking behind them with a cattle-prod. "Smile, dammit! Look more enthusiastic!" That said, even as the players moved between the various stations, despite security demands for no autographs, they'd still stop and sign: Stephen Drew does so below, immediately before brushing past Mrs. SnakePit's shoulder. 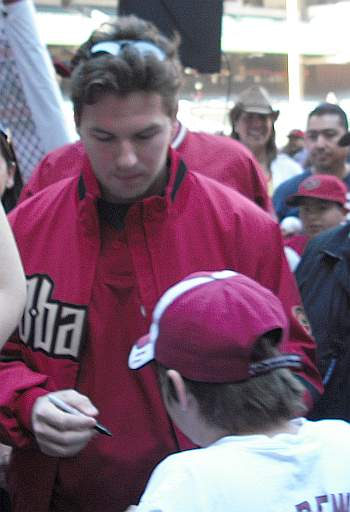 Kept seeing Derrick Hall striding about - the pic below was one of the rare occasions he wasn't in motion. He had a big grin on his face every time we saw him, and we also got a friendly wave from organist Bobby Freeman, who perhaps [or not!] remembered our World Series ring session from last year's event. Met official AZ SnakePit ticket guy, Mike Dellosa, who showed us where our seats would be for SnakePitFest '09 [they're the Bullpen Reserve section closest to home-plate, so should be nicely free of foul-pole this time]. As we head towards the season, here's a good place to remind you that Mike's contact info is in the sidebar, for all your ticketing needs. Less inspiring was the sight of D.Baxter roaming the crowd, looking exactly the same as he used to. I would have expected him to be rehabbing in the Betty Ford Clinic, dealing with his 'personal issues', but there he was. Oh, and got to check out the new D-backs Insider magazine: it's now smaller, and will be given out free at the park, instead of you having to buy it. 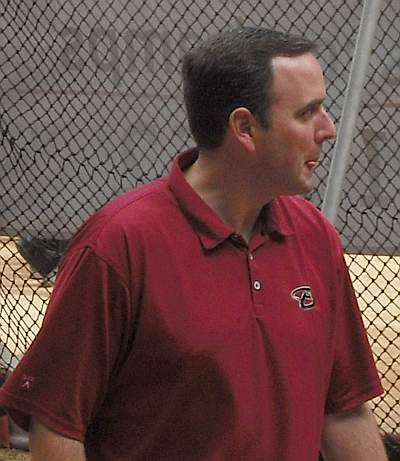 Plenty of stuff for all the family, from wiffleball for the kids at home-plate - dammit, I wouldn't mind the chance to swing a bat there! - through a lot of inflatable, bouncy fun, to the chance to cut a promo (below), which Fox Sports AZ might use during the coming season. I did notice that this time, they didn't have the roster players pitching to kids, which was a bit of a shame: I still treasure the sight of Jose Valverde doing so, with a huge grin on his face. Perhaps there were some kind of legal issues with untrained staff? We did spot the large, lengthy disclaimer on signs scattered around the park, basically absolving the Diamondbacks from responsibility for anything. Probably wise. 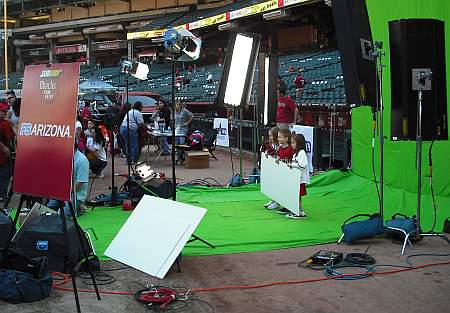 As last year, a highlight was the Diamondbacks Yard Sale, in which the team sells off a bunch of stuff with the proceeds going to their charities. As with all yard sales, the stuff ranged from complete crap to rare treasures. Falling into the latter was a two-volume set, containing hardbound editions of Diamond in the Desert: a pictorial visit to Bank One Ballpark and Arizona Diamondbacks: We're in the Show, originally published at the end of the first season in 1998. It currently goes, used, for seventy bucks on Amazon. Your price today: $20: I got the last one. I added a Mother's Day blanket for five bucks, and three random T-shirts for another $5 in total. [They seemed to have a lot of shirts left over from the Redheads events: read into that what you like] I was also tempted by some of the game-worn merchandise, but $100 for a Robbie Hammock jersey seemed a tad extravagant in the current economic climate. 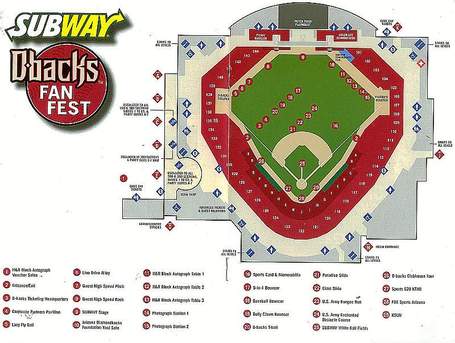 About the only serious criticism I can make of the day's events, which otherwise seemed to run almost like clockwork, was the checkout procedure for the yard sale. These were a victim of the location change down to the field, which meant no credit-card terminals, so all such sales has to be laboriously written out by hand. The result was inevitable: a queue to checkout which ran the entire length of the yard sale area, and a good chunk beyond. No-one seemed to mind too much, but it shouldn't be so hard to give your money to a good cause! A few more concession stands open might also have been helpful, though the problem there seemed more to be staff apparently unfamiliar with the 'fast' part of 'fast food'. The queues weren't particularly long, yet it still seemed to take an age to get served. 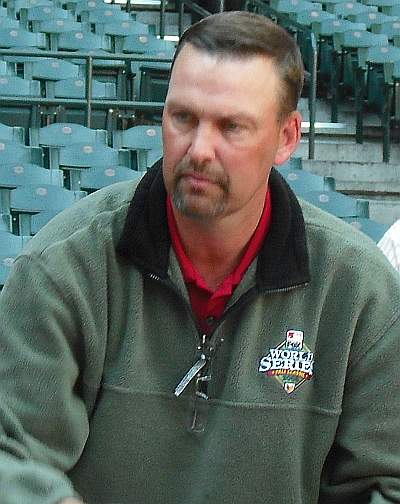 But really, we're talking minor, and the event goes from strength to strength. I recall the lament from a Rockies fan in a comment here a couple of days ago: "I wish the Rockies did more stuff like this. It seems sometimes that our fans are neglected." And, tied to that, someone else who said of the franchise, "Like anything, sometimes when you're closer to it, you tend to nitpick it," which I think is certainly the case. Fans probably tend to be over-critical: we forget that 28 teams won't make the World Series each season, but having an event like this, giving access by fans to players, commentators, staff and management can only be applauded. And whoever had the idea of moving things onto the field was a genius. Superbowl? Whatever! NBA All-Star Game? Who cares! Pitchers and catchers report in a week! Opening Day just can't come quickly enough. 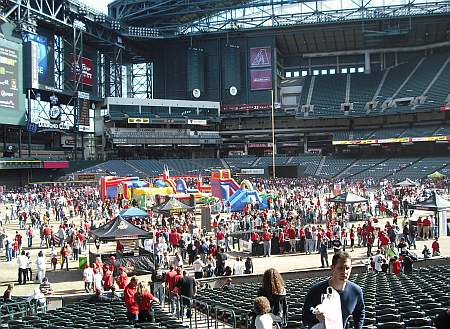