The 'Pittie for Diamondbacks Most Valuable Player in 2009 went to Mark Reynolds, who had a breakout season for the team, in a number of ways. Even though he smashed his own major-league record for strikeouts, he smashed 44 home-runs and became the first Arizona player in quite some time to have a hundred runs driven in for a season. With defense which was generally regarded as being improved, and also showing a willingness to speak up in the clubhouse, Reynolds appears to have become one of the franchises cornerstone players. Not bad for a 16th-round draft pick!

Given he is, health permitting, a diamond-lock to be the everyday starter there in 2010, that section of the report might prove a little shorter than most of these. So I'll expand the '2009' section a bit and with the aid of the marvelous Hit Tracker Online site, we'll instead take a look in some depth at Special K's home-runs, and how they break down.

One of the more pleasant memories of the 2009 season was the full blossoming of Reynolds' power, which resulted in some majestic launches this year. Up until virtually the last at-bat of the season [Wladmir Balentien surpassing it in the 7th inning of Cincinnati's 162nd game], Mark owned the longest hit of 2009, a 481-foot bomb off Brad Lidge on July 28th, that ended up in Friday's Front Row at Chase. Here's the video - it's certainly worth watching again. And again. I'd first go get a sandwich, in fact. With an estimated speed off the bat of 118.6 mph, it was also one of the hardest-hit balls in the majors this season. Here are Reynolds' five longest hits of the year - distance links go to the video:

All told, Reynolds had seventeen uber-bombs - home-runs projected independently to have gone 440 ft or longer. That helped win him HitTrackerOnline.com's Golden Sledgehammer, with an average standard distance (after they are adjusted for altitude, conditions, etc.) of his home-runs of 415.7 ft. As a comparison, runner-up Miguel Cabrera had only five uber-bombs all season. That's fewer than Mark had in August alone. The chart below plots the estimated landing spots of all his home-runs in 2009, from www.hittrackeronline.com. 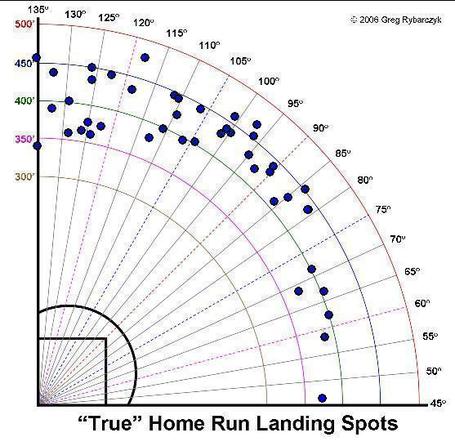 What? You'd prefer a table, a log listing all of Mark's 44 home-runs in 2009, with the pitcher they were off and game situation? Oh, alright then: here you go. There's a few things to note from this. Reynolds did not particularly benefit from playing at Chase, with 25 of the home-runs happening on the road. The sea-level parks of Citi Field and Dolp..., sorry, Land Shark Stadium were tied with Coors at four apiece, for Mark's favorite homes away from home. He did slightly favor right-handed pitching, responsible for 82% of his long-balls, in 79% of plate appearances.

Reynolds was more likely to go yard with someone on base - 48%, compared to MLB average of 41%. However, he drove in 1.55 runs per homer, slightly below average (1.58), as only three blasts were with multiple men aboard, half as many as would be expected. The chart above clearly shows Mark's power is to left (15) and left-center (13), and hardly anything to the right of center went much further than 400 feet. I would not be surprised to see teams steadily pitch him away in 2010, to try and avoid giving Reynolds the chance to pull the ball.

The pitch-count is an interesting tale. The highest number, eight, came on the first pitch, which is in line with MLB numbers. However, 1-1 and 1-0 counts saw Mark less likely to go deep than average, while 0-1 and 1-2 numbers for him were above average, showing Reynolds was still dangerous when behind in the count. However, at 0-2, he didn't have a single home-run all year: while it's kinda rare generally (only 3.2% of all home-runs in 2009 were on 0-2 counts), it perhaps suggests Mark did adjust his approach at the plate when two strikes down.

In terms of game-impact, it's worth nothing that thirteen of those home-runs gave Arizona the lead in the game - ten were in tied contests, while three were with a man aboard while down by one. Reynolds also seemed to tap into his power later in the day, with the majorify (24) of the home-runs coming from the sixth inning on. However, with regard to outs, his numbers generally matched the MLB ones, home-runs declining with the number of outs in the frame. Nelson Figueroa and Matt Cain were the only pitchers to get Reynolds rapped twice in 2009. Given Figueroa has faced Mark twice in his career, he'll not be looking forward to July next year, when the Mets see Arizona five times.

I certainly expect Reynolds to increase the number of starts at 3B: all being well, the need to be shunted across to first should be greatly reduced with the return of a healthy CoJack. Mark started 149 and 152 games in the past two years, so there's no real issue with his durability: in 2010, all those could end up being at third. Reynolds handles pitching from both sides of the rubber decently - though he preferst LHP (career OPS of .907), a career OPS of .815 against RHP means there's not much platoon possibilities. Mark, along with Justin Upton, will likely be the first names AJ Hinch puts in the lineup, almost every day, and that will mean just fragmentary scraps left over for the backups.

It will be interesting to see if the team continues to use Ojeda as a late-inning defensive replacement at third - he appeared in the same number of games as a replacement as a starter, ending up with second-most innings played there. It's been his least-effective position the past two seasons, something most obvious in the fielding percentages from last year, where he was easily the lowest of the three regulars: Ojeda (.886); Roberts (.927); Reynolds (.945). By UZR/150, Ojeda (-3.4) was hardly much of an improvement over Reynolds (-5.0) in 2009.

Therefore, we may see Roberts occupying the role of main backup, though this will depend on whether or not he's playing second-base as a starter. Any appearances at third will likely come against tough left-handers, as Roberts has some substantial career splits, handling LHP a lot better than RHP (OPS .932 vs. 646). Hard to say whether this is a small sample-size illusion. While Roberts' career minor-league splits are a lot flatter (.826 vs. .820, in about 1,700 total AB), they do still suggest he does a good job of handling southpaws. We could then use switch-hitting Tony Abreu at second on those days.