Active players: who's going to Cooperstown?

Share All sharing options for: Active players: who's going to Cooperstown? 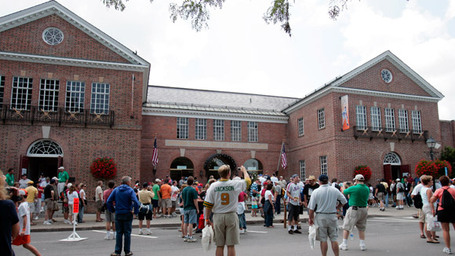 Merry Christmas! Through the wonders of pre-scheduled posting, this gift to you on this snowy morning (note: snow subject to availability) comes as I am still tucked up in bed, unwrapping presents, nibbling on cookies, or flicking through the channels in search of a Yule log.

With the results of this year's Hall of Fame voting due to be announced on January 6th, here's something for you to contemplate in between decking the halls and fa-la-la-la-la-ing. What currently active players do you think will make it to Cooperstown after the end of their career? After the jump, I'll give you my list of the thirty I think have got the best shot at a plaque in the Hall.

The first thing we have to do is decide how many players are we looking for? At any given time, the number playing who end up in the Hall of Fame is surprisingly high. Before looking into this, I'd have expected maybe a dozen HoFers to be playing in any season, but it has generally been a lot more than that over the history of the game. The graph below plots the number of active players in the Hall of Fame against the year - note that "active" can mean as little as a single at-bat or inning pitched. 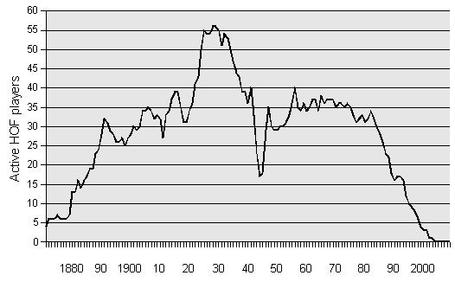 From the end of WW2 through 1984, the number was never less than 29 or more than 39. The all-time peak is 1928-29, when fifty-six would eventually be in Cooperstown. It's startling when you consider that in 1928, only 505 players appeared in the majors, so almost one in nine ended up enshrined. The most on a single team in one year is nine, several times by the Yankees in the inter-war era. Their 1931 team may have been the most HoF-friendly ever, with an everyday lineup including six future inductees (C Bill Dickey, 1B Lou Gehrig, 2B Tony Lazzeri, 3B Joe Sewell, OF Earle Combs and Babe Ruth) and 102 starts from pitchers Lefty Gomez, Herb Pennock and Red Ruffin. Yet they didn't even make the post-season, finishing 13.5 games back of Philadelphia, who "only" had five HoFers: Mickey Cochrane, Jimmie Foxx, Lefty Grove, Waite Hoyt and Al Simmons.

Numbers have steadily declined since 1982, in part due to a smaller pool from which to draw. I also suspect doubts about the steroid era will make it harder for players who flourished then to get the necessary votes. My first thought was to pick 30 active players; one for each team. This appealed, because it would mean I'd get to stiff Lincecum on the 2009 Giants, in favor of the Big Unit. That lasted until I looked at the 2009 Pirates roster: tumbleweeds roll across the field there, with regard to potential inductees. My next thought was 25, matching roster-size, and picking current players to fill it. However, a normal roster typically has seven relievers and five starters, when it's a lot harder for bullpen guys to get into Cooperstown, so would end up being contrived or unrealistic.

In the end, I decided we should revert back to 30, but split it up differently. I'd pick ten players near the end of their career; ten in their prime; and ten players who are just starting off, who I think have the best changes to reach the Hall of Fame in due course. The dividing line I've used to decide the categories is simply age-based. Anyone 35 or older goes into the "veteran" group, and anyone 25 or younger is classified as a youngster, with their age being taken as at June 30th, 2009. Everyone else goes into the middle group. For each, I've added a few quick comments with regard to their candidacy. Note that I'm concentrating on numbers which seem to factor in HoF consideration: HR and Wins are more important than OBP and WHIP.

Easiest to judge are those whose careers are (more or less) winding down, because we can get the best handle on their complete accomplishments. I would be astonished if the vast majority of the players below do not find their way into Cooperstown, and it's quite possible all ten might do so eventually.

These are not quite as certain locks as the first group, because there is still a chance injury or other unforeseen circumstances could derail their career. However, they are among the best in the game, and have been so for long enough that I am fairly confident, if they continue a normal arc, their overall numbers will be worthy.

For obvious reasons, this is the hardest part of all, because so much can happen to a young player: injuries can derail any career, and early promise can just easily flame out. Conversely, players can be late bloomers, such as Cooperstown resident Kirby Puckett, who through age 25 had an OPS+ of only 86. Similarly, over Randy Johnson's first four years, taking him to his 28th birthday, the Big Unit had made 98 starts and his ERA+ was hardly special, at only 99. He had led the American League the previous two years...but in walks, not strikeouts. Now, of course, he's a first-ballot lock. So it's possible there are gems of talent still currently buried in mediocrity. Or even Pittsburgh.

You'll notice a heavy (in fact, near-complete) National League bias, and also a skewing toward the NL West. This wasn't intentional, but I think simply reflects that those are, far and away, the young players I see most, and to whom I pay greatest attention. As a result, I will be particularly interested to see what other suggestions people might have in this area.