Share All sharing options for: Just desserts? Arizona's starters and their W-L records

Over on True Blue LA a while ago, Eric Stephen looked at the hard luck experienced in 2009 by Clayton Kershaw, who only picked up eight victories despite an ERA+ of 149. That's the highest ever by a pitcher who made 25 or more starts and got single-digits in wins. Inspired by this - never one to miss out on the chance of a cheap off-season post! - I thought I'd take a look at some of the stats for Arizona's pitchers and see what light they shed on the W-L records they 'should' have got.

After the jump, that's exactly what I'll do. And, why yes, there will be pretty charts and attractively-colored graphs, thank you for asking.

We'll start at Baseball Prospectus, which has a couple of stats of interest. Expected Wins and Expected Losses are "the record for the pitcher, based on how often pitchers with the same innings pitched and runs allowed earned a win or loss historically." They also offer Support-Neutral Wins and Losses, which is "the pitcher's expected number of wins/losses assuming he had league-average support." The sum of the latter wins and losses always equals the number of starts - there's no concept of a "no decision" there, but it's still another number to look at. Here are these for the six Diamondbacks pitchers with a significant number of starts this season.

Another way you can look at luck and a pitcher's performance in by Game Score. This is a Bill James stat, which combines innings pitched and strikeouts with runs, hits and walks allowed, to come up with a single figure [more or less] between zero and a hundred, which measure the quality of a starter's outing. Over the period 2001-09 in the National League, the first number is the odds of a starter getting a win, loss and no-decision, for various Game Score numbers. As comparison, the second number is the Diamondbacks' percentage from the past year.

For those who prefer things in more visual terms, the graph below plots game score against the three possible decisions - loss, no-decision and win - at various levels of Game Score. As you'll see, the odds of a no-decision remains relatively constant, except at the extreme ends of the performance spectrum. 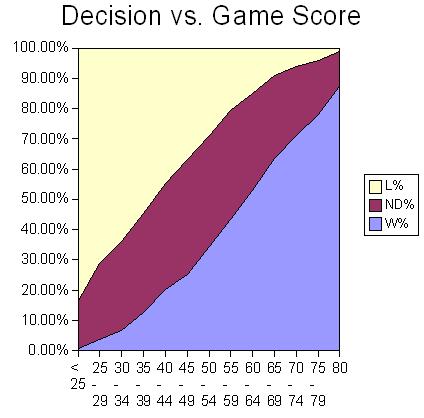 Comparing the Diamondbacks' numbers to the expected ones, the biggest gap is in the upper middle of performances, something previously touched upon by Diamondhacks. As a yardstick, league average was 50, and Adam Wainwright's mean GS this year was 59, But in 39 games with a GS of 55-64, the Arizona rotation went only 10-13: they would be predicted to go 19-7 in starts of that caliber. The reason for the gulf is simple: in those 39 games, the offense scored more than four runs only eight times, and one or zero a dozen times. We got good pitching - only three of those outings were not quality starts - but the hitters just didn't show up.

On an individual basis, there's a couple of ways you can use the data. The quick and dirty approach is to take a pitcher's average Game Score over the season, see what group he falls into, and multiply by his starts. For example, Dan Haren's average GS was 61, so he's expected to win 0.5281 * 33 = 17.4 games. If you want something a little less granular, take each start and allocate a fraction of W and L accordingly. Haren's first start had a GS of 76 - he took the loss (3-0 vs. Colorado), but by the chart , the performance was actually worth 0.7796 wins and only 0.0427 losses. Do this for each game and add up total wins and losses to get a cumulative number. The chart below gives the numbers calculated by each method (QWL = Quick W-L; CWL = Cumulative W-L) for our starters.

There isn't too much difference between the two methods - the quick way tends to give the pitcher fewer decisions, but they're within a couple of each other in all the cases. Carving up the data in another way, we can compare Average Game Score with Win %. It seems reasonable to think that an AGD of 0 would see you lose every time, an AGS of 100 would get you a 100% Win %, and an AGS of 50 would see a pitcher get close to an even record. So which NL starters had the biggest gap between their AGS and Win %? Here are those at both ends of the table (min. 10 starts)

All six of the main Diamondbacks starters ended up in the top half of the 97 qualifying starters: Petit (#5); Davis (#17); Scherzer (#31); Buckner (#36); Garland (#42); Haren (#45). Kershaw, incidentally, was #26 by this method, with an AGS of 58 and a .500 record. Worth remembering this chart the next time tries to tell you that wins and losses are a good measure of a pitcher's ability. As measured by Game Score, any of the top five pitchers were better than Braden Looper - but mustered only eleven wins between them, with 42 losses, fewer victories in 75 starts, than Looper got all by himself.

For interest, the chart below plots W% against Game Score for every pitcher since 2000 with ten or more starts. Here's the Google spreadsheet with the numbers, if anyone wants to analyze them further - also included are ERA, ERA+, OPS and OPS+ for each starterr. The resulting correlation between Game Score and W%, at 0.61, is actually fractionally better than that for ERA+ (-0.60) or OPS+ (-0.57). 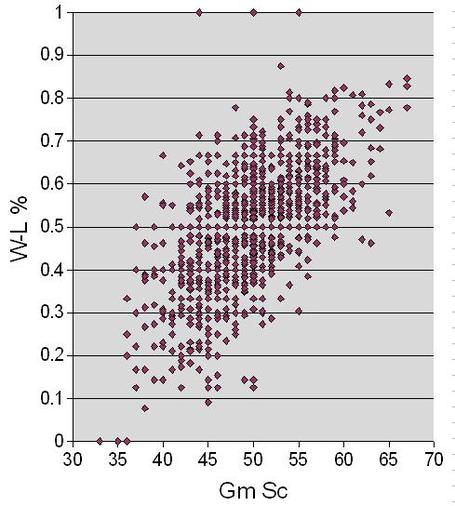 This method of analysis does have some limitations. Game Score doesn't take into account park factors, for example, I'm not overly happy with the bonus points it awards for strikeouts, and for some pitchers, the W-L record can include relief appearances. However, based not only upon it, but other metrics as well, it does suggest that our starting pitching was really not much of the problem last season. Virtually across the entire rotation, from Haren to Buckner, none of them got the W-L record their performances deserved.