Why baseball needs a salary cap - or, "How can we stop the Yankees?"

Share All sharing options for: Why baseball needs a salary cap - or, "How can we stop the Yankees?"

Baseball believes they have a good system, yet, when you look at the results each year, more often than not it's the 'haves' … those with the big payrolls. Those who have the large revenue streams are the ones who go to the postseason. Now they'll hang their hat on the fact that once in a while some small-market team comes through. Most of the same small-market teams are on the bottom of their divisions, year in and year out, which in itself says something about the system.
-- Jerry Colangelo

The triumph of evil, in the shape of the New York Yankees 27th World Series victory, once again has discussion surfacing on payroll discrepancy and whether baseball needs a salary cap in some form [and I truly recommend you read Joe Posnanski's blog linked above]. The Yankees spent over $200 million, which is $52m more than the second-placed Red Sox, a gap larger than the entire amount spent by the Marlins, Padres or Pirates on their playing staffs. Accusations that the Steinbrenners "bought" a World Series inevitably follow. However, critics of a salary cap point out the wide spread of teams to have won the title in the past few years, with the great majority of franchises having at least tasted playoff baseball.

After the jump, let's delve into baseball finances and parity, to see if we can find a way to prevent the Yankees from winning the World Series forever...

Major-league baseball is the only major professional sport in North America without some form of salary cap in place - the NHL was the most recent to add one, and it's contention over that issue which cost the sport the entire 2004-05 season. The exact amount varies, from $2.3 million per team for Major League Soccer, to $128 million in the NFL. It's important to note that most sports also have a salary floor, which teams must pay out in salary: for the NFL this year, it's a little above $112m, so the range of discretionary spending for owners is not much more than 10%.

Baseball's current contributions towards financial parity are the luxury tax and revenue sharing. The luxury tax is a surcharge paid by teams over a certain salary amount, using the average annual values of contracts for players on 40-man rosters, plus any benefits. In 2009, the limit is $162m, so the Yankees will be the only team due to pay anything to the commissioner's office. The rate charged depends on the frequency of the team going over the threshold. At the end of last year, the Yankees paid a 40% surcharge, costing them $26.9m, while the Tigers were only assessed at a 22.5% rate as 2008 was their "first offense".

In all honesty, you might rename it the Steinbrenner Tax: his team have paid a total of $148.5m over the six season it has been in effect (not including this year), more than 90% of the total. The Red Sox are next, down at $13.9m, while the Tigers and Angels are the only others to have hit the threshold, and hardly register on the financial radar, at $1.3m and $927K respectively.Then there's revenue sharing: the calculations involved are somewhat arcane, so I'll refer the interested reader to this article. While detailed numbers for this aspect are not publicly available, it was reportedly responsible for about $450 million being transferred from the richer teams to the poorer this year.

But is it enough or does baseball need an adjustment to improve parity? I'm unimpressed by the argument that the past nine World Series have been won by eight different teams. Not when the rankings by salary of the winner, since the Diamondbacks arrived in 1998, are: 2, 1, 1, 8, 15, 25, 2, 13, 11, 2, 12, 1. Half the time, it's gone to the team with the biggest or second-biggest payroll: only once to those in the lower-half. More generally, the chart below plots games won against salary, compared to league average for that season - a team paying out more will have a value on the bottom above one, less than average is below one. 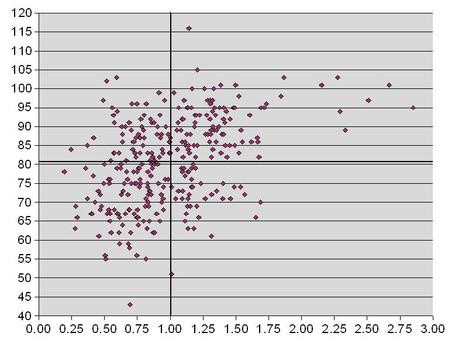 The eight highest ratios - from 1.87 to 2.85 (in 2005) - all belong to the Yankees. The next highest was 1.84 by the 2004 Red Sox, who won the World Series that year, of course. Perhaps making things clearer, here are the percentage chances of a team posting various records, based on the amount they spend, along with the average number of wins for teams in that salary bracket.

However, a single year is a snapshot. To quote Posnanski, baseball "tends to equalize teams. That helps blur the dominance of the Yankees. If the New England Patriots were allowed to spend $50 million more on players than any other team, they would go 15-1 or 16-0 every single year. And people would not stand for it. But in baseball, a great and dominant team might only win 95 out of 160, and it doesn’t seem so bad." There's also the nature of the post-season: "a crap-shoot," according to Bobby Cox, or to quote the ever-quotable Billy Beane, "My job is to get us to the playoffs. What happens after that is f_cking luck." This hides the fact that since their last World Series victory in 2000, the Yankees have had the best record in the AL four times, and made the playoffs every year but one.

So the picture gets even starker when you look at the totals over the entire decade. The graph below shows a team's average number of wins from 2000-09, against their expenditure over that time, compared to the MLB mean. The statistical correlation between payroll and wins jumps up from 0.43 to 0.67 [where zero would be no connection, and one would be a perfect match]. Even with the smaller number of data points, the association is obvious. While a team can hope to buck the odds and win for a season or two without spending money, if they want to do so on a regular basis, they simply have to shell out. 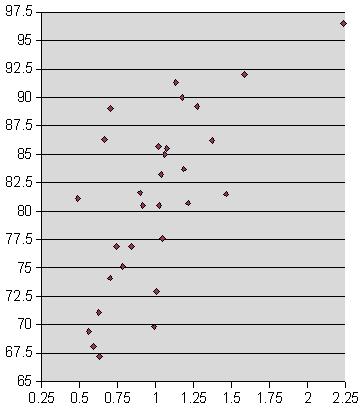 No prizes for guessing what team the spot in the far top-right of the graph represents, but if you need a clue, dress it in pin-stripes. The only teams to have managed 82 wins or better over the past decade, while spending below average, are the Twins (66%, 86.3 wins) and Athletics (70%, 89.0 wins). So it is possible to do well on a small-budget. It just isn't easy - especially in a consistent manner, rather than just for a season or two. The reason is obvious: free-agency, which means your best players will inevitably gravitate towards better contracts elsewhere. The Diamondbacks, incidentally, are almost in the middle of both axes: we've spent 102% of MLB average, and have won 80.5 games per season.

Another factor is that it's not just the size of the Yankees' contracts that is intimidating, it's the length of them. Jon Marthaler reports that there are only two teams in baseball which currently have a significant amount of cash (more than $30m) committed for the 2013 season. One is the Blue Jays, or as Jon calls it, "the Land of Bad Future-Inflated Over-Long Contracts." However, far beyond even them are the Yankees, who are already paying over $92.2 million in 2013 to just four players - A-Rod, Sabathia, Teixeira and Burnett. That quartet alone will earn more than the entire payroll this season of eighteen major-league teams. The same goes for the 2012 season, with the Yankees already $40m ahead of the rest of the league.

One important thing is that competitive parity is not just about stopping the Yankees from steam-rolling their way to the playoffs, season after season. We also need to take a look at the bottom of the chart, because a salary floor is equally as important as a salary cap. This is where we find our expansion siblings in Tampa: for every dollar spent in the Bronx, they had less than a quarter to work with. Put another way, the Yankees spent $10m more on payroll in the past two years than the Rays did in the entire decade. Last year aside, the results have been dismal, with the team averaging below seventy victories per year. It does put them above Pittsburgh (68.1 wins) and Kansas City (67.2) - neither team spending even 65% of average.

That's why it's important to have a salary floor as well. Too often, owners basically grab the income from revenue sharing and pocket it, rather than investing it back into the team, as was the intent of the program. The Marlins reportedly take more in revenue-sharing than they spend on MLB player payroll. Of course, it's impossible to tell, since baseball franchises, being privately-held corporations, are under no obligation to open their books - even as some of them receive tens of millions of dollars in income from the commissioner's office every year. Accountability here appears to be strictly on the honor system: and we all know how well this works in big business.

The question of what, exactly, needs to be done is complex. An increase in the luxury tax, making it a good deal more punitive, since the Yankees apparently regard it as the cost of doing business, in the style to which they have become accustomed. An adjustment to revenue sharing, in particular, transparency to ensure that money intended to improve a team's on-field situation, is used for exactly that. However, the first step with any problem is to admit it exists. Bud instead trumpets, "We have certainly more parity than ever before," and compares baseball to the NFL, where they have full revenue sharing and a salary cap: "What about Oakland? What about Jacksonville? You could go on and on. What about Detroit, who hasn't made a playoff now in I don't know how many years?"

The difference really shouldn't need to be pointed out. In the NFL, it's smart, well-run teams win out, not those with the most money. If an NFL team keeps being stupid, and making bad decisions, they will keep right on losing. This is the American way. Those who decry the notion of a salary cap as "commie" are missing the boat: the US, and US sports, should be a meritocracy, with the best-managed and best-run teams rising to the top each year, rather than simply those which squat in the largest, most profitable markets and so possess the deepest wallets. Wait till Brandon Webb, Justin Upton and Mark Reynolds are all playing for the Yankees in 2015 or so...

Selig also said in September: "The Brewers are not a one-year wonder. Tampa Bay is not a one-year wonder. I still think we have enormous competitive balance." The Brewers ended 2009 with a losing record, while the Rays barely scraped above .500, finishing nineteen games back and in third-place. That's where the problem of baseball's lack of competitive balance starts: the refusal of the commissioner, who can do anything he wants "in the best interests of the game," to admit that the current system is badly-broken. And if it's ever to be corrected, that's where any solution will have to start too. I'll finish with a final quote from Posnanski:

That team that spent $50 million more than any other team, that team with three sure Hall of Famers and as many as four others, that team that bought Milwaukee’s best pitcher and Anaheim’s best hitter and Toronto’s No. 2 starter and Boston’s favorite Idiot and the most expensive player in the history of baseball and so on, that team will win the World Series, and spray champagne on each other, and they will tell you that they won because they came together as a group and kept pulling themselves off the ground and didn’t listen to the doubters.

To which all I can add is: yes, that's baseball. But it doesn't have to be.

[The salary and wins spreadsheet used in the course of writing this article is available as a Google document here.]