This Week in AZ Baseball

Share All sharing options for: This Week in AZ Baseball

The hot-stove season is now officially under way, with the free-agent market opening on Friday morning, with 171 players putting themselves on the auction block. Relief pitcher John Grabow was the first to go, getting a $7.5m, two-year deal from the Cubs. He has been pretty good over the past couple of seasons, but this seems like the Northsiders doing what they do best, overpaying for mediocre talent, since Grabow's career ERA+ is 107. Anyway, after the break, we'll discuss more free agents (both major- and minor-league), the end of professional baseball for the year in the US, how our winter guys are doing, and whatever else comes to mind.

As noted already, the Diamondbacks have got their winter underway already, with a trade bringing reliever Aaron Heilman to the team, in exchange for a couple of prospects. Fan opinion has been a bit mixed: some see Heilman as a mediocre arm, not worth pursuing, while others welcome the depth Heilman's addition provides, at the cost of two low-ceiling minor-league players. There was some discussion of him possibly trying out for the rotation, but all the public comments from the team have him as a set-up man for Qualls. Said Josh Byrnes, "He's pitched in pressurized situations before in terms of his role and the markets he's pitched in." 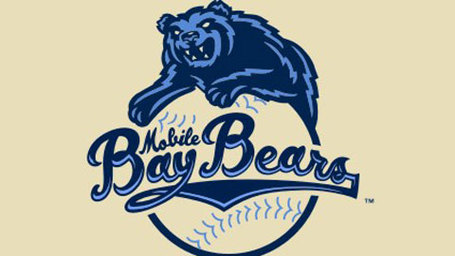 Our Double-A affiliate in Mobile have got themselves a new logo (above). It's not bad, I reckon - if you think it looks a bit retro, that's exactly the look they were going for. Said team president Bill Shanahan, "We're going back in time and honoring the old Bears uniforms of the 1940s. Our new cream-colored home uniform is a classic look. The bear is out of hibernation, hungry and ready to go. With our old logo, the bear was a nice, fun, happy bear. But we're going for a more aggressive look now. We're hungry for more championships and eager to expand." Hungry? Why do I sense a certain Rockies fan-eating bear picture might be cropping up in the comments?

A couple here I'd like to see us try to re-sign, most obviously Jon Coutlangus. Not, admittedly, for much more reason than I like saying "Coutlangus"... And I have to support the retention of Trent Oeltjen, simply to prevent the marching of a mob of angry Laideez on Das SnakePitBunker. But otherwise... If you've spent six years in the minor-leagues and are still down at Double-A, with your thirtieth birthday coming up on Tuesday, one wonders if considering an alternative career might be for the best.

Today is the last day of the Arizona Fall League, with the championship game going on over at Scottsdale Stadium between the Peoria Javelinas and the Phoenix Desert Dogs - the latter are after their sixth straight AFL title, which is quite a feat, given how there's little carry forward of roster members from one year to another. The game is being shown live on the MLB Network and also streaming for free at mlb.com, with the game underway at the time of writing. However, it will take place without #1 draft pick Stephen Strasburg, who twisted his knee and been scratched from the Peoria line-up as a precaution. The hearts of Nationals fans skip a beat.

Arizona's boys on the Scottsdale Scorpions finished with a 15-16 record, 3.5 games back of Phoenix in the standings. Despite a decent performance in front of the assembled 'Pitters on Wednesday, Brandon Allen finished the year hitting a disappointing .177 in the AFL, though did lead the league with 22 walks. It has been a very long season for Allen: he has played in five different leagues (Southern, International, Pacific Coast, MLB and AFL), accumulating over 750 plate-appearances (502 in the minors, 116 in the majors and about 135 in the AFL). Take the rest of the year off, Brandon - you deserve it.

If any one of our hitters looked good in the AFL this year, it was new 40-man roster addition Cole Gillespie. While not showing much power (one home-run in 72 at-bats), he hit .333 with a phenomenal K:BB ratio of 6:17. Yep, that's not a misprint: he walked almost three times for every strikeout. Given the league average was almost 2:1 the other way, it's especially impressive. On the pitching front, Bryan Augenstein recovered well after a poor first outing, to end up with the lowest ERA among the Arizona prospects at 4.15. Over his final five outings, he allowed four earned runs over 15.2 innings, with three walks and 14 strikeouts.

Conor Jackson returned from the Dominican Republic on Monday - to the disappointment of his team there, who wanted him to extend his stay. You can't blame Leones del Escogido for wanting to hang on to CoJack. At the time of his departure, he was leading, not just his team but the entire league in the Sabermetric Triple Crown categories: OBP (.561), SLG (.589), and OPS (1.150) as well as those old-school favorites, BA (.425) and - are you ready for this? - stolen bases, with Conor having nine, without being caught once. It's perhaps that which is perhaps the most convincing proof that he has fully recovered from the energy-sapping effects of Valley Fever.

Jordan Norberto also continues to perform well, pitching in the DWL. With a 2.70 ERA, he has yet to walk a batter in ten innings of work, and has fanned thirteen. However, Norberto has hit three batters and thrown four wild pitches, so control does still seem to be something of an issue. In Venezuela, Alex Romero is hitting .372, though has yet to hit a home-run after 86 at-bats. Not too much of a surprise there. Tony Abreu is also homerless in the Dominican, after 79 at-bats, and has only two walks in that time, leading in part to a lackluster .659 OPS thus far. Bit of a theme for most of the Diamondbacks in winter ball: combined, those listed have only four HR in over five hundred at-bats.

Seems to be a bit of a spat going on over the sale of the franchise previously known as the Tucson Sidewinders. An investor says former owner Jay Zucker refused to honor a contract giving him the right to buy 10% of the team. David Smallhouse of Primo Ventures says he invested $1 million in the franchise in 2004 with an option to buy another 10 percent of the company. During the 2007 sale of the franchise, Smallhouse tried to exercise the option, but Zucker refused. Smallhouse now wants a Pima County Court judge to compel Zucker to go to arbitration regarding the matter.

And a random note to finish. NL Rookie of the Year, Chris Coghlan could have been a Diamondback. We actually picked him first, in the 18th round of the 2004 draft, but he didn't sign and re-entered the draft in 2006, when the Marlins picked him in the 1st round - guess it proved a profitable decision for him. The rest, as they say, is history...