Share All sharing options for: The 2009 'Pitties: Rookie of the Year 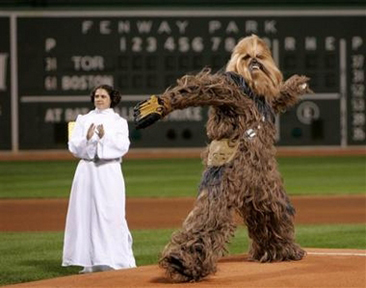 Why, yes - I have been waiting all year to use that picture, thank you for asking. Actually, I wanted to use one of that fan at Joe Robbie Stadium Pro Player Park Pro Player Stadium Dolphin Stadium Land Shark Stadium, who attended a May Marlins-Diamondbacks game in full Chewbacca get-up. I can think of about 29 other stadia in baseball where I'd rather wear a full-body fur suit. Before going on, however, congratulations to Ryan Roberts, who won the award for Unsung Hero of the Year, beating out Juan Gutierrez by a 2-1 margin. I trust he'll be getting our logo inked somewhere on him, to commemorate this honor.

Nine players made their major-league debuts for Arizona in 2009: Brandon Allen, Bryan Augenstein, John Hester, Trent Oeltjen, Gerardo Parra, Rusty Ryal, Daniel Schlereth, Esmerling Vasquez and Clay Zavada. They join other qualifiers Billy Buckner, Gutierrez, Bobby Korecky, Kevin Mulvey and Josh Whitesell - I've checked what I can find as far as transactions go for Buckner and I do not think he reached the 45-day cutoff for pre-September days on the roster since his debut in August 2007. If anyone knows differently, let me know and I'll cross him off . After the jump, we'll lay out the numbers for all the Diamondbacks' rookies in 2009.

After careful analysis, I have come up with the following five nominees for Rookie of the Year. I ummed and ahhed over including Buckner, but questions over his rookie status and the fact that, until September, he largely blew chunks, convinced me that he did not quite qualify.