"This was a game to put in a time capsule and let people of the future watch it."
-- Randy Johnson

The MLB Network showed Randy Johnson's 20-strikeout game at the start of the month, part of a series of high-K outings. It provided a fascinating glimpse into a bygone era of Diamondbacks baseball

Look at the bottom of that Diamondbacks line-up. Ouch. We forget that, outside of Luis Gonzalez, the 2001 Diamondbacks were not great hitters. Among the regulars (250+ PA), the only ones with an OPS+ better than 92 were Gonzo (174),  Sanders (117) and Grace (113) - this was a team driven by pitching, with an total ERA+ of 120. To put that into context, it's like every inning for Arizona that year was pitched by Jake Peavy, who has the same career ERA+. Of course and in particular, driven by Curt Schilling and Randy, who went 43-12. That number of wins by two team-mates hadn't been surpassed in the NL since Juan Marichal and Gaylord Perry went 46-14 for the Giants in 1966 [and the AZ pair would beat that the following year, going 47-12!]

While ageless wonder Counsell is the only AZ position player still actively playing, there's a couple of semi-familiar names appearing for the Reds too. Donnie Sadler was the leadoff hitter for Cincinnati - the commentators were very enthusiastic about him, saying he was a highly touted Red Sox prospect at one point, also praising his wheels and arm [we'd see startling proof ot the former in this game]. He flamed out, however, his final AB being for Arizona in 2007. Reds' catcher, Kelly Stinnett was also a regular with the Diamondbacks from 1998-2000, and then returned to Arizona in 2005 as a back-up to Chris Snyder.

They mentioned that Castro was making his first start at first-base, outside of spring training, since 8th grade - even now, in his fifteen-year career, he has made just four there. Clearly, the aim was then, as now, to stack your line-up with as many right-handers as possible when facing Johnson, and hope the defense holds up. It didn't help much, with two strikeouts for the Reds in the first - though both came on fastballs, not the devastating slider Johnson was to unleash as the game went on. There was some early speculation by the commentators that Johnson was experiencing back pains earlier on.

The opposing starter for the Reds was Chris Reitsma. He was last seen in the majors in 2007, but played in the 2008 Olympics for Canada. This was his first year in the majors - and it's worth noting he allowed one run in eight innings of work, keeping his team in the game. Admittedly, he did fan eighteen less batters than Johnson, which I'm thinking has got to be a record for K disparity between starters ever. But hang on: a rookie starter giving the Diamondbacks' hitter fits, after barely a month in the major-leagues? Our ace getting basically no run support? Plus ça change, plus c'est la même chose...

Two more strikeouts for Randy in the second inning, sandwiched around a brutal sawing-off of Boone's bat. A call from the play-by-play guy [curiously, they seemed to rotate a couple of guys in and out of that role, including Rod Allen] to "Stevie Gilbert" - presumably the stats guy - to find out how many K's Rivera had in his career against Johnson. Is this the same Steve Gilbert now covering the Diamondbacks for MLB.com? When Johnson fanned Stinnett in the third, that tied him with Bob Gibson for (then) 11th on the all-time list. The K of Reitsma which immediately followed, broke the tie.

Said Thom Brennaman at the start of the fourth, "I'm not sure we've seen three more dominant innings." Well,, the fourth probably extended the streak, with Johnson striking out the side. Barry Larkin, the third victim, had a spectacularly bad swing on 2-1, letting the bat and it ending up somewhere behind the umpire. The bat also helicoptered away from him on strike three. I also didn't realize how long the AFLAC trivia question has endured: the one for this game was, "How many NL MVP awards were won in the 1970's by the Reds?" The answer is six.

Gonzo wasted a chance in the bottom of the fourth: he tried to stretch a leadoff single down the left-field line into a double, but got gunned down by the Sadlerzooka . Meanwhile Johnson had fanned six in  a row, tying his own franchise record, until Aaron Boone singled with one out in the fifth, ending a streak of 13 consecutive batters retired by Johnson. Boone then stole second, and was running to third on the pitch - a mistake by Johnson on an 0-2 count to Rivera. The RBI single which resulted frustrated the Big Unit, who clearly muttered to himself the rest of the inning, though no more harm was done.

The Diamondbacks did tie it up in the sixth and Johnson was involved, singling to lead things off. Though he was erased on a Finley fielder's choice, the upgraded speed on the basepaths might have been for the best, as our CF then went to third on a Bell single. Gonzo popped up with one out, swinging on a 3-0 pitch, but Sanders drove the run in with another hit. Enlivened by this, Johnson then struck our the next seven batters faced, setting the franchise record which he'd tied earlier: it took him 33 pitches, 25 of which were strikes.

In the middle of the streak the commentators started to wonder "What's going to happen with the Circle K-meter?" as it was only designed to handle sixteen K's. Impromptu banners proved the immediate solution - though between then and the end of 2002, it would overflow on four more occasions - three Big Unit starts, and one by Schilling. We haven't come close to challenging the K-meter since - the high-water mark for the Diamondbacks' pitchers at Chase over the past five seasons is only fourteen strikeouts.

In the eighth inning, the crowd seemed to realize what they were watching, with a 'Ran-dy, Ran-dy' chant going in the stands. However, It was only starting the ninth that Brennaman mentioned the record. After RJ struck out JCastro to end the inning, his 20th K, Johnson thrust his fist towards the sky, and yelled as he left the mound, a rare display of emotion. Of the strikeouts, eighteen were swinging, almost every one on pitches out of the zone. Zero walks. Yet he still ended with a no-decision: his Game Score of 97 remains the highest without the starter getting a W, since Nolan Ryan pitched ten shutout innings, and fanned 15 in August 1990, his Rangers eventually winning in 13.

Offensively, the Diamondbacks didn't do much. In the bottom of the eighth, Arizona had a chance, with Bell's two-out ground-rule double into the pool area. Gonzo was intentionally walked, and a wild pitch moved both runners up. There was some discussion of whether to pinch-hit for Sanders, likely with David Dellucci, but Reggie was left and flew out to center. One also wonders whether Johnson could have gone out there: he'd thrown 124 pitches, but in the seven starts that season, Johnson had averaged 120 pitches per start - his very next outing, he threw 145, perhaps making a point of some kind.

The issue was magnified because we had also played extra-innings the night before - the decision to lift Randy looked flaky, as Byung-Hyun Kim and Bret Prinz combined to walk the bases loaded in the tenth, before Prinz ended things. In the 11th, it looked like even more like the game was over. Two more walks and an error by pitcher Russ Springer on a bunt loaded the bases - for the second consecutive inning, without a Reds hit. A K gave us some hope, but Cincinnati scored two runs on a sacrifice fly, with Sadler tagging up and scoring all the way from second on a ball hit to the wall in deep left-center.

Fortunately, Reds closer Danny Graves, coming off 1.2 innings the night before, couldn't get it done - back-to-back singles by Bell + Gonzalez led things off, and a failed Sanders bunt later, Mark Grace doubled both men home. Two walks - one intentional - loaded the bases, and Graves then faced the last man available off the Diamondbacks' bench. Matt Williams. He worked the count full, hen ripped one down the left-field line, foul by inches. However, the next pitch from Graves was down and away, a bases-loaded walkoff walk, something which has only happened for us five other times in franchise history [most recently on September 9th this year, when current 3B Mark Reynolds walked his way to victory against the Dodgers]. 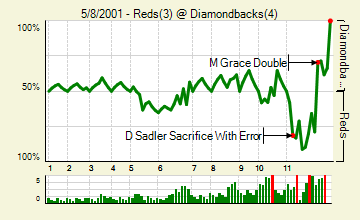 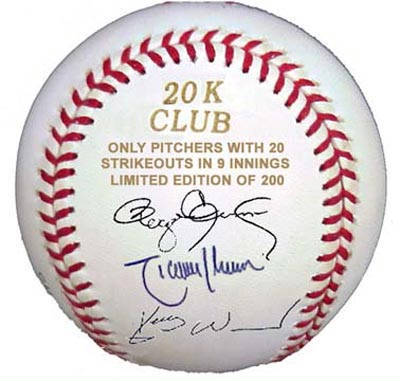 I really enjoyed watching the game, and it was fun to see the likes of Kim, Bell [who went 3-for-5 and saw 31 pitches!] and Grace [supremely clutch in the 11th]. However, it was Johnson's night and a great reminder of exactly how dominating the Big Unit was at his peak - he had more strikeouts (372) that seasonthan Reitsma had in his entire eight-year career. I certainly hope to see more Diamondbacks' coverage on the MLB Network - I can think of several other contests which would certainly deserve repeating on the channel.