The 2009 Diamondbacks: what the heck happened?

Share All sharing options for: The 2009 Diamondbacks: what the heck happened? 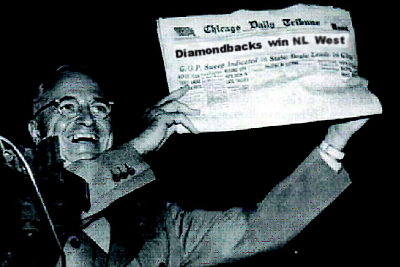 The above is a measure of how badly things went for our team this year: the "worst case scenario" suggested, would be something for which we would now be more than happy to settle. It's comforting to realize that I am far from the only person to have seen their high expectation for the 2009 Arizona Diamondbacks mercilessly dashed. Virtually every pundit I could locate online predicted us to have a winning record - the respected Baseball Prospectus PECOTA projections had the team all the way up at 88 wins, and they weren't alone.

Other sites predicted 86 wins; 85 wins, 84 wins, 88 wins, 83 wins for Arizona, and even CHONE, the most pessimistic I could find at 79 wins, had us finishing only three games back of the Dodgers. From a more fan-based perspective, in our pre-season poll, of approaching three hundred participants, only 12% predicted the Diamondbacks would have less than eighty victories, never mind struggling to reach seventy. Not quite the same realm as the chairman of DEC saying "There is no reason anyone would want a computer in their home," but why were so many people - neutral observers, with no vested interests or rose-colored fandom glasses - so completely wrong? Why was there such a gulf between expectations and reality? After the jump, we'll break down some numbers - here are Josh Byrnes and AJ Hinch talking about the season that's just finished.

Injuries
Let's not kid ourselves. The loss of Brandon Webb was a devastating blow to the Diamondbacks in 2009, as much because it was completely unexpected to us. After all, over the previous five season, he had never made less than 33 starts per year. To be reduced from that, at an ERA+ of 140 to a single, ineffective outing was clearly a huge factor in the team's underperformance. How much?

Let's look at Webb's record in 2005, 2006 and 2008, when the total number of runs scored by the team (696, 712 and 720) were close to this year, when it's exactly the same as 2008, at 720. In those three years, Webb's collective ERA was 3.31 - one tick above the number posted last season - and his average W/L record was 17-9, with the team going 19-14 in his starts This seems a reasonable estimate for what we "should" have got from Webb this year, assuming run support approximately matching those hundred starts, and an ERA consistent with last year.

Instead of him, there was the Quadruple-headed Beast of Webb-Replacement Suck: Bryan Augenstein, Yusmeiro Petit, Billy Buckner and Kevin Mulvey. While Buckner has, of late, looked a semi-credible back-end candidate for 2010, this has been the exception, rather than the rule. In their first 33 starts, that quartet had an ERA of 6.24, went 5-18 and the team posted a record of 9-24 - ten games worse than that we could realistically have expected from 33 Webb starts. Even using a more conservative estimate - Fangraph.com's Wins Above Replacement (WAR) - we find that Webb in 2008 was worth six wins to Arizona - the four-pack of replacements plus Webb in 2009 rated only 0.3 wins in 33 starts, 5.7 less. I'd split the difference between the two methods and say Webb's injury cost us eight wins

We should also consider the unfortunate loss of Conor Jackson to valley fever, which basically meant he had the entire season written off. No real way to measure his input except by using WAR. This tells us there's a difference of 4.5 wins between what we got from the SnakePit MVP in 2008 and his sub-replacement output for the team this season. So, between the loss of him and Webb, we're probably looking at a cost to the team around twelve games. That's a massive difference by itself, almost enough to have put the team into contention for the wild-card, and is not including anyone else - I believe Arizona's players missed a total of almost 800 player-games on the DL. But wait! There's more...

Trades
After it became apparent that this team was not going to be in the post-season hunt, several deals were made, sending useful pieces to other teams, generally in exchange for players who might help the team in 2010 or beyond. The players we lost would likely have helped the Diamondbacks to several more victories - albeit meaningless ones - had we retained their services for the rest of the season.  From WAR, we can see what the ex-Diamondbacks did for their new teams - production which could have been in Arizona.

Of course, we need to balance against this, the production provided to Arizona this season, by what we received in return. The chart below shows the four main trades, with the WAR values given to their new teams after the trade, on both sides of the deal:

Ugh. I hope those trades work out better for us in the long-term than they did this season, because they provided absolutely nothing of value to the 2009 team. While it would be simple just to say that we would have approached five wins better, simply by hanging on to the players with whom we started the season, it probably isn't as simple as that, because of the positional changes. The replacement at second for Lopez was mostly Rusty Ryal, who was a credible +0.6 WAR in his time here. While still well short of F-Lo, who hit .320 for the Brewers over 66 games, it's enough to make me reduce the overall impact to four wins.

Almost as significant a weakening were the Peña and Rauch deals, not just for what they would have done in the 'pen but the negative impact of the players received in return. After the way Allen tore up AAA pitching, an OPS+ of 70 in more than thirty games was still disappointing. I think we'll be taking Reno numbers with a larger pinch of salt next season. Mulvey lacked control, issuing 14 free passes (a dozen walks and two hit batters) and five home-runs in only 23 innings. He'll need to do better than that, if he wants even to be our sixth starter next year - a spot at which, as noted above, Arizona blew chunks. We'll discuss the moves more in due course, I think; both Mulvey and Allen will only be 24 on Opening Day 2010, so that's in their favor.

"Bad luck"
Yeah, this may sound like a Cubs-esque cop-out, but there's some evidence to suggest the team was unlucky, and I don't just mean the lodging of fungal sports in the lungs of one of our best 2008 hitters. Baseball is a chaotic, in mathematical terms, game - in the sense that a tiny change in circumstances can have a massive effect on results. For example, a couple of millimeters difference on where the ball hits the bat, far beyond what any hitter can control consciously, may be the difference between a grand-slam and an inning-ending can of corn to the outfield. However, that requires a good deal more space, and this piece has already gone on long enough, so I'll carry any detailed analysis there forward for another day... But it's probably worth at least another three wins.

Conclusions
That brings us to a total of 19 wins lost to the Diamondbacks by factors more or less outside their control - the trades would likely not have happened had the team still been in contention, which in turn was the result of a combination of factors, including injuries and the whims of the baseball gods. It's enough to explain the entire gulf between performance and expectations, and then some.

This does not absolve the front-office from responsibility for their part in the disappointing season. Given the known issue with Webb's shoulder - which was apparently a big enough concern to stop the two sides from agreeing on a contract extension - it was particularly reckless to have no credible backup available in our pitching rotation. First-base continues to be a major black-hole of offensive production, and with the honorable exception of Dan Haren, the contract extensions awarded over the past few years have yet to bear fruit (and that's putting it mildly). Those outside the lines certainly have their share of blame.

However, even with all the self-inflicted wounds, the Diamondbacks as formulated on Opening Day 2009 would, if fully healthy and getting anything approaching normal luck, have been over .500, at the very least. Indeed, thanks to a number of everyday players surpassing expectations (Montero, Upton, Reynolds), 90 wins could conceivably have been achieved had the breaks gone minorly our way. Again, I'll analyze our actual performances more in the coming weeks, but you might find some surprises there too [here's a tidbit - the 2009 bullpen was, by at least one advanced measure, better than in 2008].