Diamondbacks 5, Cubs 2: There never is any end to summer

Share All sharing options for: Diamondbacks 5, Cubs 2: There never is any end to summer

Our Arizona Diamondbacks end the season by winning the final game and the series, but the Cubs never really put up much during the afternoon. It wasn't a game that was anything but an expression of pride, with neither team going to the playoffs, and everyone on the field seemed ready to be getting on with things.

It was a display of the Three True Outcomes, with the two squads combining for 22 strike outs and each scoring at least half their runs by the long ball. Some of the calls may have been questionable at the plate, but who can blame the umps for wanting to head home, too? Not that the players argued much; it's the last day before summer vacation, and no one cares what the teacher assigns.

The first couple innings were largely quiet, with the two teams trading scoreless innings. The Cubs were the first to get a base runner with Derrek Lee getting a single in the bottom of the first with two outs. Jake Fox promptly struck out on four pitches. He might have been inspired by the D’backs’ top of the first effort: both Stephen Drew and Justin Upton struck out, the latter on his way to four strike out day.

The second inning featured more of the same, with the Diamondbacks looking inept and the Cubs stranding a single from Jeff Baker. The third inning, however, the boys in Sedona Red would strike. Chad Tracy, in perhaps his last game with the Diamondbacks, doubled to fairly shallow left. So Taguchi appeared at first to have made the catch, and that was the way it was called. Perhaps it was luck, but he didn't attempt to pretend he caught the ball and rifled it to second, where Tracy had huffed his way. After a short deliberation, the call was reversed and Tracy had a double, if perhaps a slightly unorthodox one. It didn't seem that he would be advanced, however, with Augie Ojeda, also perhaps in his last game for Arizona, flying out to center and Doug Davis striking out on a pitiful bunt attempt. Stephen Drew, however, would not be denied, and scorched a ball to left. Tracy scored easily, and Taguchi’s errant throw allowed Drew to advance to second.

It looked like so much fun Gerardo Parra decided to join in, who fouled off a couple pitches before driving Drew in with a single to center. Upton would then add to his collection of strike outs for the afternoon, but the Diamondbacks were up 2-0.

To the third. Doug Davis, yet another player that might not be here next year and who had had up to that point a solid game, began to come unglued. Sam Fuld, perhaps the poster child for the disconnect between individual offensive production and the worth of RBIs, would take one strike before hustling to second for a double to lead off the inning. He was then subsequently moved to third by a sacrifice by Ryan Dempster, who was trying to help his own cause for the day. With one out, it seemed certain he would score, and Ryan Theriot tried his best. As a napkin lazily rolled across the infield, he would peck a ball to Davis’ right, who promptly picked it up and caught Fuld in a pickle between home and third. Theriot would sneak to second during the excitement, and although he would get advanced to third on a Davis wild pitch, there he would stay as Davis Houdini shed his shackles by forcing Lee into a grounder. The Diamondbacks were out of the jam.

Miguel Montero would start things off in the top of the fourth with a single, and then be quickly moved to third with a Mark Reynolds double. The stage was set for the suddenly resurgent Chris Young, who picked out a three wood and drove a shot to left center, which would effectively be all the Diamondbacks would need for the day to be triumphant.

At this point it was strike outs and a halfhearted attempt by the Cubs to salvage the last game of 2009. They would cut the lead to 5-1 with a solo home run by Fuld, who, as noted by Jim, who has dubious distinction of going the most career plate appearances without an RBI by a non-pitcher. He trails only Gene Good, who had 135 without an RBI for the 1906 Boston Beaneaters. The second RBI was considerably easier to come by as he sacrificed Reed Johnson in to score in the bottom of the seventh. 5-2 was the score, and 5-2 it would remain.

A few notes on the remaining three innings: the Diamondbacks had no trouble with the eighth, perhaps an attempt to deny there ever was a problem this season with that inning. Eric Byrnes, one of a half a dozen or more players to be looking at the search for a new team, popped out. In perhaps the most “fuzzy feeling” moment, however, came to end the Diamondbacks’ ninth inning. Upton came to the plate with two outs and Parra standing at second., batting average sitting at .300 square. An out would bring it down to .2998, technically a .300, and the record books might never notice the difference. Parra, however, was looking out for his outfield comrade. As Upton took a ball, he would take off for first, daring the catcher to throw him out. Geovany Soto obliged, and .300, true .300, non-qualified .300 was saved. AJ Hinch may have had the bitter beer face for the act, but Upton obviously appreciated it, giving Parra a hug as the game ended.

And really, it's this type of moment that reaffirms what's great about sports. Sure, who doesn't want to be a winner? But this human element, where a friend did a selfless act for a friend, transcends home runs or stolen bases. This completely unscripted moment is free of the framing that often makes equal scenes in fiction seem saccharine and hollow. It won't be recorded in books, or compiled in any highlight reel. Many of us might forget it as the years drive forward, or never pass it on.  But it will remain.

So maybe 2009 wasn't a successful season. They often aren't.  The Diamondbacks built something here today, this year. We, as fans, built something here. We won't know what it is, not until long after the winter comes. But the summer will keep rolling on, long green meadows with dusty infields where heroes hit long, long home runs, make diving catches, come back to the game after seeming to lose everything, and help each other to .300. 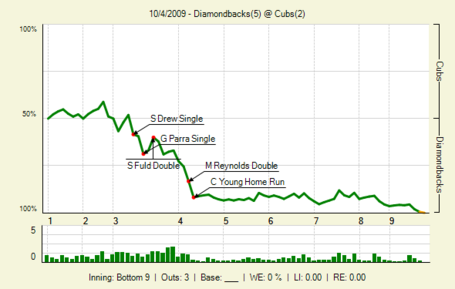 Well, not everyone is Babe Ruth: Doug Davis (batting) -5.6

That's it for the Diamondbacks officially.  From this point on we shoot without a script, make for uncharted territory, and yada yada yada.  Stay tuned for lots of off-season coverage, ranging from analysis of players or team statistical subsets, to a report from the year 1860, investigative reporting about the new Spring Training site, a lament against the worship of amateur sport, and more!  Until then, I'm your host, soco, saying goodnight.

Only 133 days until pitchers report.