Fall-ing Down: Halloween at the Arizona Fall League

Share All sharing options for: Fall-ing Down: Halloween at the Arizona Fall League

Hey, Phillies and Yankees! Wouldn't you rather be playing here?

Much though Fox and ESPN would have you think otherwise, the World Series isn't the only professional baseball going on in the United States. Even as we head in November, the Arizona Fall League gives us lucky folk here in the state a chance to see the future stars of tomorrow, with all thirty major-league teams sending some of their top prospects to take part. Names you might know who've previously played in the AFL for the D-backs include: Stephen Drew (2005), Conor Jackson (2004), Mark Reynolds (2006), Chris Snyder (2003), Chad Tracy (2002) and Brandon Webb (2002) - this year's nominees from Arizona were led by  Brandon Allen, with Bryan Augenstein, Pedro Ciriaco and Cole Gillespie also present on the Scottsdale Scorpions roster [each AFL team is an amalgam of players from five MLB teams, with some from Japan as well].

A collection of SnakePitters, from Scottsdale all the way to Tucson, made their way to Goodyear Ballpark this afternoon, and saw our boys shut-out the Peoria Saguaros 6-0, Pirates' prospect Donny Veal combining with three relievers on a four-hitter. After the break, we'll have a full report on the afternoon, the park and the experience as a whole - and there's also details of a repeat performance planned for next month.

From SnakePit Towers, it was an easy run down the I-10 to Goodyear, though I have to say, from anywhere on the east side, it's not quite as centrally-located as some of the parks. It's not an "official" AFL venue: the 'home' team Saguaros generally play their games at the Peoria Sports Complex, but a couple of contests are re-located elsewhere. Not a problem for us, and it gave us a chance to check out the new spring training home of the Reds and Indians, which we hadn't seen before. It's over by Goodyear Airport - ok, hands up those of you who knew Goodyear had an airport - and there was no problem getting there or finding parking, even though the city had been giving away free tickets for the game, in conjunction with a local hospital.

It's a nice enough stadium - there's really no such thing as a bad ballpark in Arizona - though doesn't have much of an interesting view beyond the walls. One thing we did appreciate was how most of the seats were in the shade: this may be the end of October, but it could stll be uncomfortably hot in the direct sun. Looks like they are still trying to grow an outfield grass area; should be ready in plenty of time for spring training. We attacked the concessions stand, and were favorably impressed by the prices: a hot-dog, nachos, chicken tenders, fries and a large soda came to a total of less than twenty bucks. Later on, I enjoyed a large brew [well, as much as one can ever be said to "enjoy" domestic American beer] for $7.50.

The attendees at the game are shown above (save Mrs. SnakePit, wielding the camera) were soco and mrssoco, BattleMoses, edbighead and his family, plus a car up from Tucson, driven by 'Skins, with Justin and katers riding along with him [Zephon was a late scratch due to illness]. We took up our position close to the Scorpions' on-deck circle, all the better to follow the D-backs' prospects, and settled in on what was, without doubt, a perfect day for baseball. It was one of those afternoons where it was a pleasure to live in Arizona, and a far cry from watching Yankees fans shiver in their ponchos or the currently rain-delayed Game Three in Philadelphia. Hey, Bud! You need to play the World Series in Arizona every year. You know it makes sense...

Shortstop prospect Pedro Ciriaco was in the two-hole for the Scorpions, and I explained to Mrs. SnakePit that she needed to pay attention, because we were looking at the Possible Future Replacement for Stephen Drew. Said PFRSD then proceeded to go down on three straight strikes, looking very bad so doing: Chris's snort of derision was worth a full article of prospect analyisis. This was the beginning of a bad day for the Diamondbacks in the line-up. Between Ciriaco and Brandon Allen, our players were a combined 0-for-9 with three strikeouts. Allen definitely appears to be flagging offensively - he's hitting only .175, though it has been a long season. Today was his 165th game of 2009, between all levels, and included his seven hundredth plate-appearance - last year, he had only 539. 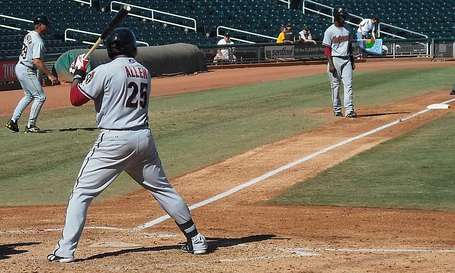 However, Ciriaco did reach on an error in the third inning, and was eventualy driven in from third (above) by an Allen ground-out. This was part of a three-run frame for the Scorpions, though all the runs were unearned, as a result of Saguaro errors. This wasn't quite what you describe as a crisply-played game: Peoria were charged with no less than six errors in the game, and only two of the six runs allowed by their pitchers were earned. In contrast, Scottsdale made only one, though it was an embarrassing clanker during the first, off the glove of right-fielder Dominic Brown (Phillies). Since he later had a pair of doubles and drove in three runs, we'll consider him redeemed. Allen also made a couple of very solid plays at first-base, continuing to enhance his reputation there.

To be honest, the game-day chat was not particularly focused on the contest as such. We had rather more fun with things like the names of the players taking part - for some reason, the AFL seems to have some great labels. Leading the pack there today was catcher Tuffy Gosewisch, whose name we decided belonged to a long-haired Persian - "Earl Tuffy of Gosewisch, three-time winner of the Burlington Cat Show." It got to the stage where we were meowing when he came to the plate; dunno if he heard us, but it must have been incredibly confusing if so. He was playing catcher for Scottsdale, rather than Giants first-round pick Buster Posey, who still can't get a game, even in the AFL. For any Giants' fans [hello, Victor!], here's a rare pic of Posey actually behind home-plate. Don't get excited: he's just warming up the pitcher between innings, while Tuffy has a bowl of milk. 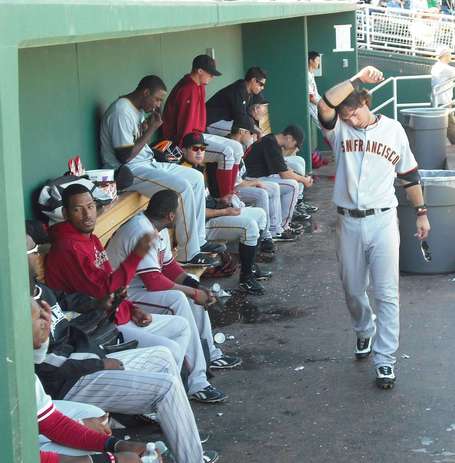 Other amusement was provided by the 40-year old bat-boy, who bore a strange resemblance ot Curt Schilling - guess that whole political career thing didn't work out quite so well, eh? Superfan Susan was right behind the Scorpions dugout, giving full vocal vent to her encouragement in only the way she can - cheering just as hard for the non-Diamondbacks on the roster, which was nice. Mention must also be made of Mrs. SnakePit's Halloween costume - in the photo, doubling as a mobile-phone holder. Which is nice. Her telephone conversation regarding balloons twisted into naughty shapes also merited attention, and she'd brought candy, which seemed to be much appreciated. Though given the hordes of small, costumed consumers who arrived at SnakePit Towers this evening, we should have hung on to it [I just had to do a restock run to Walgreen's!]

It was a fine afternoon: there are few better ways to relax than a balmy afternoon in the sun, watching baseball, when you have little or no emotional investment in the outcome of the contest. Thanks to everyone who came out - hope they had as much fun as we did. It's not quite the end of the season either. For wait, there's more! Due to SnakePitFest, we've been given a bunch of free tickets to the AFL game at Scottsdale Stadium on Wednesday, November 18th, with first pitch being 6:35pm. If anyone is interested in going, please send an message with your physical address and how many you'd like to my email (it's in the footer) and I'll pop them in the post [not sure quite how long before first pitch we'll get there, so are adopting this approach of handing out the tix]. It'll be the last chance for some communal baseball before the long, dark winter, so hope to see some of you there. 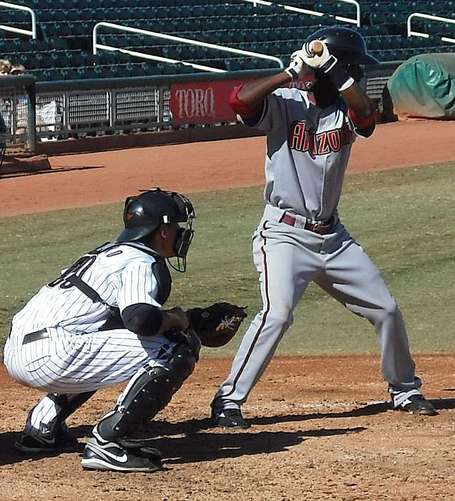