Diamondbacks 0, Cubs 5: From Heroes to Zeroes

Share All sharing options for: Diamondbacks 0, Cubs 5: From Heroes to Zeroes

Ah, these were the Diamondbacks we have endured for the last six weeks or so. Not the impostors who showed up yesterday, rapping hits all over the ballpark and confusing us with their tricky "run scoring." A rookie pitcher threw seven shutout innings against Arizona, and combined with a pair of Cubs relievers on a three-hitter. Or, as we Diamondbacks fans have come to learn in 2009, "business as usual."

My final recap of the season after the jump, since soco's doing tomorrow. I should just phone it in - maybe copy and paste the AP recap - since it's clear that's what most of the players have been doing for the past six weeks. If I can be bothered, details to follow.

CHICAGO -- Randy Wells allowed three hits in seven strong innings and struck out a career-high 10, helping the Chicago Cubs beat the Arizona Diamondbacks 5-0 on Saturday. Wells (12-10) gave up a leadoff double to Stephen Drew and then retired 14 straight before Eric Byrnes hit a two-out single in the fifth. Wells' 12 wins are the most by a Cubs rookie since Kerry Wood had 13 victor... Ah, who am I trying to kid? It's the blandness of those kind of reports which drove me to start up my first blog, way back in the days when the Internet consisted of two tin-cans with a piece of string connecting them. I needed to express my passion, my enthusiasm, my dedication to the team, and Mrs. SnakePit was fed up hearing about it.

However, from an Arizona perspective, this season has seemed like nothing more than a machine for killing said passion. At least in 2004, there was a self-schadenfreude to be had, because the team was so bad. It was the Plan 9 From Outer Space of baseball seasons, where you could only watch with bemusement as the straight-faced attempt to produce something good imploded into historical levels of awfulness. This season, has been not just bad, it's been forgettably bad: Land of the Lost seems like an appropriate comparison, in more ways than one. Admittedly, no-one expected that to be good, and that's a good part of the pain this year has caused.

If you want a better cinematic metaphor, I'd go with the movie version of Aeon Flux: I had high expectations for that, having loved the animated series and Peter Chung's work in The Animatrix. Then I went to the cinema. I tried to like it; I desperately wanted to, but the longer it went on, the lower I slumped in my seat, as my hopes were brutally crushed. By the end, I fervently wished they just hadn't bothered. That's what this season feels like, and stories like this one don't help. "Over nearly five months, the judgments Hinch made from afar have met a cruel reality... That no matter how good his players are individually, they stink together." Way to ruin my winter, Jeff Passan.

Which brings me - reluctantly, with all the eagerness of a middle-aged man approaching his first prostrate exam - to today's game. Another Saturday contest not screened on the "home of the D-backs", Fox Sports Arizona: they abandoned the Diamondbacks for the pastures of, yuk, college football quite some time ago. It was, however, on WGN, a refreshing change from their usual diet of syndicated television series and films "edited to fit in the time allotted". Though today's offering would have been a good deal less painful, reduced to thirty minutes, including adverts, and with a Cubtastic laugh-track added.

That said, Daniel Cabrera didn't pitch too badly, basically being undone by one bad inning - really, three runs in five frames is not a disaster from a back-of-the-rotation starter. Cabrera was much as advertised. While there's no questioning his stuff, with a fastball which touched 97 mph apparently, he walked three batters and hit another, exhibiting the same control problems that plagued him when starting with the Nationals. NASCARbernet reckoned a relatively simple mechanical adjustment could fix it - though if that is so, one wonders why it hasn't been done before.

With the help of a couple of double-plays, Cabrera faced one batter over the minimum through the front three innings, matching the Cubs zero-for-zero. Not so much in the fourth; with one out, the home batters suddenly seemed to figure him out, and the next four batters all reached, three of them plundering extra-bases. To be fair, Cabrera was not helped by the pointless sprawling of Chris Young, turning a single into a triple. Similarly, in the fifth, Bryan Augenstein failed to deal with a nubber back the mound, and another run scored - a single off the glove of Stephen Drew followed, completing the scoring for Chicago.

It was four runs more than they needed, as our team made another rookie look like the second coming of Cy Young. Wells had never struck out more than seven in a game - he had fanned six Diamondbacks after just three innings, and Mark Reynolds ended the day with the golden sombrero, having gone 0-for-4 with four strikeouts. So what? Well, strikeouts may be not so relevant when you're hitting .275 and have an OPS of .944 - as Reynolds did on September 12. But over the nineteen games since then, he is hitting .153 (11-for-72) with thirty strikeouts, a mere five walks and an OPS of .521. That is a problem.

Not that anyone else on the offense seemed to do much better. Doubles from Drew and Gerardo Parra, plus a single from Eric Byrnes and a walk to Augie Ojeda, were the only base-runners the team managed all-day, striking out a total of twelve times, ten of them in seven innings from Wells. Arizona was hitless in five opportunities with runners in scoring position, and Wells' Game Score of 80 tied for fifth-highest against Arizona this year - Timmeh is the only other young (aged 27 or below) pitcher to have reached that mark against us in 2009. I don't think Wells is that good. You wouldn't have known it today though. 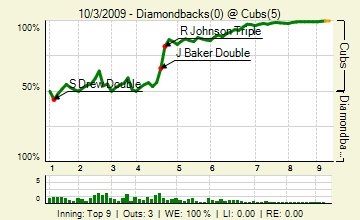 There was just so much suck to go around that no one Diamondbacks merited particular mention. Outside of Drew, the only positive contributions came from the mop-up men who posted zeros in the seventh and eighth: Leo Rosales (+0.4%) and Yusmeiro Petit (+0.1%). Everyone else was in negative territory. In the GDT, hotclaws and NASCARbernet tied for the lead on 36; a little sprightlier than yesterday overall, but not by much. Also in attendance for the penultimate time: eel, edbigghead, snakecharmer, pygalgia, emilylovesthedbacks, morineko, Zephon, 4 Corners Fan, Azreous, kishi, katers and Wailord.

It is with some relief that I come to the last recap paragraphs of 2009. I won't be idle - dear me, no, I've got about nine articles lined-up in one form or another, all ready to rock and roll when I have end-of-year numbers to plug in. There'll be no shortage of stuff to talk about, that's for sure, as we work out what needs to be done during the off-season to prepare the team for, hopefully, a better stab at things in 2010. It's been a massively disappointing season, that's for sure. But I know that, long before pitchers and catchers report, my enthusiasm will be fully-recharged, and I'll be desperate for D-backs baseball to begin again.

Thanks in particular go to 'Skins and 'charmer, for their tireless work over the season, and authors soco, kishi, Azreous, IHateSouthBend and Sprankton, for recaps, moderation and their ceaseless good humor in the face of some painfully sucky baseball. But I want to express my appreciation to everyone who had read and/or contributed to the site this year - you have helped make the place into what it is [whatever that may be!]. Here's to better in 2010: look forward to you joining me on that journey.