This piece was originally written in October 2009, after Jarrod Parker was scheduled for the procedure. With it potentially looming for Patrick Corbin - and, coincidentally, Parker also looking to go on the table for the second time - it seems an appropriate time to blow the dust off it.

Share All sharing options for: Everything you wanted to know about Tommy John Surgery (but were afraid to ask)

The news that top Diamondbacks pitching prospect Jarrod Parker is due to have Tommy John surgery today was not unexpected - he'd been out of action for most of the second-half of the year. But it's still never a good feeling when you hear about any pitcher getting his arm opened up. That's especially so when it is a young one, of whom much had been hoped for the future, with his name being mentioned as a potential member of the Arizona rotation, as early as at some point next year.

After the jump, let's see if we can soothe the concerns of Arizona fans a little bit. We'll describe what the operation entails, why it's necessary, as well as what Parker's chances of returning, and when that might be. Gory surgical pictures are included, so you might want to put down the beef taco first.

Ulnar collateral ligament (UCL) reconstruction, to give it the proper medical name, repairs damage to the ligament which connects the upper arm-bone, the humerus, to the ulna, the lower, outside arm-bone. Violent motion - and there are few more so in sports than pitching a baseball - can stretch or tear this ligament. A 2002 study  on young pitchers suggested that the number of pitches thrown is the greatest determinant of risk; the types of pitches thrown showed a smaller effect; with only a weak correlation between throwing mechanics perceived as "bad" and injury.

This used to be a career-ending injury, but in 1974, Dr. Frank Jobe carried out the first operation on Dodgers' pitcher Tommy John - he recovered fully, and went on to win 164 games after his return. Nowadays, the surgery is increasingly being performed on pitchers younger than John, who was 31 at the time. Before 1997, only about 12% of the operations were on patients aged 18 or younger. But in 2005, that number had increased to 33%

How does surgery help?

In the operation, the ligament in the elbow is replaced with a tendon. Previously, it used to be taken from a cadaver, but nowadays, the preferred donor tendon is from the patient's own forearm, typically the one attached to the palmaris longus muscle. This tendon serves no real purpose and, in fact, about 15% of the population don't have it - alternative sources include plantaris tendon in the ankle or a small part of the hamstring tendon, taken from the back rather than plant foot.

When any damaged tissue has been removed, the surgeon will then drill a series of holes in the elbow. To quote Tom Gorman, "If you were imagining a Makita with a quarter-inch bit you wouldn't be too far off." I don't know about you, but I am wincing and holding my elbow at the very thought. Once the subject's elbow has been turned into a piece of Swiss cheese [ok, it's a bit more structured than that], the tendon in question is inserted through the holes in a figure-eight pattern and locked in place. The aim is to provide it with a good supply of blood, to assist it in the healing process. The damaged ligament may be left in place: the nerve endings it possesses will still work, and assist in the recovery. 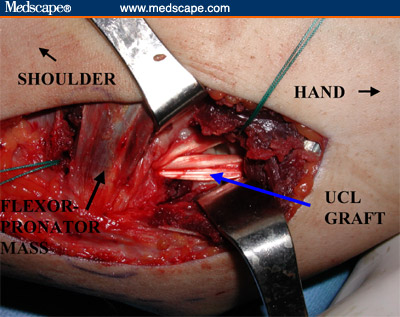 What are his recovery chances and how long will it take?

The good news is, the elbow joint is relatively simple in anatomical terms, since it can only move in one direction. As a result, elbow issues are generally less problematic than, say, shoulder ones. In a 2008 study, 75.5% of major-league baseball players surveyed after the procedure, said they had returned to the same level of play, and some sources put the failure rate as low as 7%. However, it does happen: somewhat poignant is the MLBlog of former D-backs starter Brian Anderson, where the final entry describes his surgery and included this poignant section:

Just knowing that the situation is fixed, I can look forward to rehabbing and getting strong again. It’s encouraging when the doctor says there is no doubt that I have a lot of innings ahead... Now I’m going to try and be an encouragement to my teammates and help out in any way that I can help on the field, all the while, making sure I’m going to be ready to pitch in the Major Leagues for whoever will have me. Maybe that can be Kansas City and I can make right for these past two years. I don’t think I would be too expensive of a player, and hopefully I can put up some good numbers and have some good years.

He never pitched in the majors again, blowing out the elbow in spring training. That, however, is the exception rather than rule and the odds are in favor of Parker, though it won't be quick. Typically, the surgery requires a full year of rehabilitation and maybe another year pitching before returning to pre-injury form. Part of the reason for the lengthy time out, is that the body has basically to convert the inserted tendon (which attaches muscle to bone) into a ligament (which connects bone to bone). This won't happen overnight: It is very weak immediately after the surgery, and the rebuilding process must be gradual.

For the first week, the arm is kept in a hard brace, completely immobile; the subject can then start very gentle exercises, and by about two weeks after the surgery, it's usually possible to restart everyday tasks like eating and combing his hair. However, any kind of pitching activity is still a long way off. The average wait is around four months, though it can be anywhere from three to six, depending on the patient's recovery. It's crucial not to rush the process. While the arm may feel great, there is a definite risk or re-injury should the new tendon/ligament be over-taxed, especially early on in recovery. As with any arm injury, the distance and velocity of the throwing is gradually increased, up until the pitcher is once again throwing off a mound. Here's a typical timetable:

However, that isn't the end of the matter. It will often take another year for a pitcher to become completely comfortable with his new arm. Pitching coach Mark Wiley referred to is as getting the "feel of the ball" and it has been described as being like learning how to pitch all over again. Said Wiley of that first season back, "They keep their heads above water and contribute ... but they're not as consistent."

Will he still be a top prospect?

No reason why not. Doesn't seem to have stopped Chris Carpenter this year, has it? He had the op in July 2007 - 2008 was a wasted year, but he has kicked ass in 2009. More objectively, a study found "Most major league pitchers return from ulnar collateral ligament reconstruction by the second season after surgery with no statistical change in mean innings pitched, earned run average, or walks and hits per inning pitched from preinjury levels." Indeed, some pitchers swear they throw harder after the surgery than they did before. In a 2003 story in USA Today, Tommy John subject Billy Koch said "It felt so good when I came back, I said I recommend it to everybody...regardless what your ligament looks like," and was probably not entirely joking.

However, other pitchers never return to the same velocity: Francisco Liriano, for example, lost two to three miles per hour and has been significantly less effective since the operation. It didn't help Russ Ortiz either, who missed all of 2008, and gave up a home-run on his very first pitch back. But he sucked before the operation too, so no change there. Overall, despite anecdotal evidence, there is no objective proof that the surgery improves velocity or pitching ability. In a 2002 interview, operation pioneers Dr. Frank Jobe told ESPN, "What the surgery does is restore the ligament's stability to where it was four or five years ago. A pitcher might say the operation did it, but it's just more stability in the arm contributing to better mechanics." The rehab program may also help improve conditioning overall.

If you're curious, I'll finish with a list of other pitchers who had the surgery this year and are currently making their way back to the majors. Monitoring them and their progress during 2010 may offer some insight into the timeframe for Jarrod Parker.