Share All sharing options for: The 2009 Diamondbacks Season, Part IV: The Eighth-inning Retch

Arizona fans will have nightmares about the eighth inning for most of the winter. The team allowed 120 runs there, 15 more than the next worst frame. Two particularly savage meltdowns come to mind. On June 2nd in Los Angeles, seven stellar innings of one-run ball by Dan Haren and a 5-1 lead were undone in the space of three outs from Tony Peña and Daniel Schlereth, as the Dodgers scored five times. And then, on July 9th at Chase, the Marlins inflicted the first ten-spot on us since August 2005, sending fourteen men to the plate as the Diamondbacks blew a seven-run lead for the first time in franchise history.

While perhaps the worst incidents, those were far from the only times the eighth inning proved troublesome. On no less than eighteen occasions, Arizona's opposition scored three times or more: no team in the majors had a worse inning this year. After the jump, we'll break down the numbers, see what kind of impact it had on our W-L record, and who were the guilty men in the bullpen.

To some extent, the reputation of the eighth inning exceeds the reality. While I know it probably didn't feel that way, the vast majority of the time (in 106 games), our pitching staff posted a mundane, competent zero. And despite the high number of runs allowed, the team wasn't actually all that much worse at blowing late-inning leads than average. The graph below shows our win percentage (the lower line) when ahead at the end of an inning, compared to MLB average (the upper line). 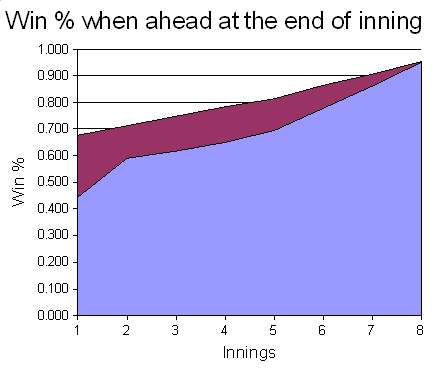 If there's a problem here, it seems to have been our issue keeping first-inning leads, not going into the eighth. The 2009 Diamondbacks actually had a losing record there, going 16-20 when they ended the opening frame up. In comparison, MLB teams won better than two of three overall. Of course, this doesn't say, when the leads were lost. However, after shrinking then remain constant from the second through the fifth, the gap gradually narrows. In the eighth inning, we won when ahead 86.2% of the time, compared to MLB average 90.6%. That translates only to about 2.6 less victories than expected.

Looking closer, there's no denying the eighth inning sucked for our pitchers, but it didn't often cost us the lead. We were ahead 58 times going into the eighth - in 53 of those games, we still had the lead leaving it. It may have been a smaller lead, certainly, but that's still a better 'save percentage' than any other frame bar the ninth. However, when you include tied games in the equation, the balance shifts dramatically. Of the nineteen times Arizona were tied at the start of the dreaded eighth, they led after it only twice - they were still tied eight times, and were behind nine. Given our record when trailing at that point was 2-85, those deficits almost certainly became losses.

The numbers in the eighth were startling, especially when compared to the seventh: batting average increased from .254 to .295, though this may largely be explained by an increase in BABIP from a reasonable .302 to .335. Equally as responsible for the spike in opposition scoring are the 19 home-runs allowed. While far from the most given up by our pitchers (that'd be the 32 during the fourth), 47.4% of the eighth-inning blasts came with men on base - including the only grand-slam we allowed in 2009, off Clay Zavada by Angel Pagan, in Citi Field on August 1st. That compares to 38.7% of our homers overall. The same goes for hits with men in scoring position: the opposition batted .267 there overall, but in the eighth, the figure increased to .338.

So, the numbers there were a combination of factors: bad luck in BABIP, inability to keep the ball in the park, especially with runners on base, and clutch hitting by the opposition. Let's now break it down and see which of our pitchers were most often used in the eighth inning, and then take a look and see how they did. Put another way: "Hooray! I get to use another diagram!" And here it is: 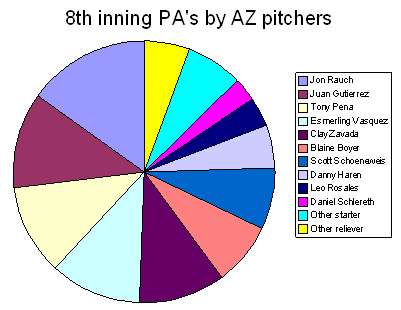 Jon Rauch, Juan Gutierrez and Peña were the main workhorses, combining for 38.2% of the plate-appearances. Rauch was substantially the least effective of the trio, with an .820 OPS against, compared to .744 for Gutierrez and a very-impressive line from Vasquez, .181/ .298/.236. That's a .534 OPS, with no home-runs and three extra-base hits in 72 at-bats. At the other end of the spectrum, two whose numbers stood out in a bad way: Blaine Boyer and Scott Schoeneweis. The former was hit at a .396 clip in the eighth, but in mitigation, this was with a ..438 BABIP, and he allowed only four extra-bases and no homers. Not so Schoeneweis: his performance was 19-for-50 with four home-runs, for an OPS of 1.076.

The good news is, I am disinclined to expect a re-occurrence in 2010. To start with, there'll be no Schoeneweis, Rauch and Peña, and with regard to the eighth, the first two in particular were more problem than solution. A return of BABIP and opposition clutch towards more normal levels is also likely. However, avoiding multi-run homers and sound defensive baseball would also be helpful - not that there is anything particular different about the eighth inning, compared to any other. That said, I think I won't be alone in feeling pangs of concern until Gutierrez, Vasquez, Zavada or whoever gets to work the inning next year, shows that it's just a number between seven and nine.

I'll hold over a more general analysis of our bullpen numbers this year until next time. :-)