Diamondbacks 12, Cubs 3: Can we play Chicago every day?

Share All sharing options for: Diamondbacks 12, Cubs 3: Can we play Chicago every day?

This was a game full of surprises. Not the least of which being that it was a Friday day-game, which therefore managed to get underway before any of us had noticed. I could grumble about the unnaturalness of it all, and how unfair it was for Arizona to have to play a day-game immediately after flying in from San Francisco, etc. But going by the results today, maybe we should do it more often. For the Diamondbacks' pounded out their highest number of runs on the road since June 18th, highlighted by - and you may want to sit down for this - four-hit games from Eric Byrnes (season OPS+ 57) and Chris Young (76). They combined for three homers and seventeen total bases.

Yeah, "surprising" may not quite cut it. Been a while since I've had to look that one up in the SnakePit thesaurus, but follow me after the jump for details of the arresting, distinguished, exceptional, extraordinary, impressive, noteworthy, noticeable, outstanding, phenomenal, preeminent, singular, smashing, solid, striking, super, uncommon, uncustomary, unusual, unwonted, weighty and wonderful victory.

Seems the Cubs are even keener than us for 2009 to end. The announced figure was the second-smallest crowd of the year at Wrigley - trailing only the game on Wednesday night -and BCB's Al estimated the actual number present as only 15,000. Though who can blame them, with a game-time temperature in the forties, and a firm breeze? [Yes, folks: now is the time when it's pleasant to live in our state. We finally get our reward for enduring the hell of the past four months] But it wasn't just the fans: if Arizona have mailed in performances of late, then as mentioned in the GDT, the Cubs today appeared to be using a network of bonfires, semaphore flags and galleys, having been outscored 24-5 over the past three games, all losses against the mighty powers of Arizona and Pittsburgh.

At one point, it looked like we might be on our way to the first double-digit shutout inflicted on the Cubs at Wrigley since May 2003. That wasn't to be - in part because of what can only be described as Zavada interference - but the nine runs by which we won was a margin not surpassed there since the Diamondbacks clubbed six homers during a 15-4 win in July 2006. We scored three runs before anyone even noticed - certainly, before I noticed there was a game on - thanks to a Stephen Drew single, Mark Reynolds sacrifice fly and Young solo homer. We then piled on four more in the third, Rusty Ryal unclogging the bases with a double, and scoring on a Byrnes hit.

As a general rule of thumb, I don't mind games where our Win Probability is north of 95% by the middle of the third inning, and it helped that Billy Buckner was delivering another solid outing. Through six innings, he had allowed three hits - all singles - and three walks, displaying probably the best form of the season. He tired in the seventh, giving up three straight hits including an unusual ground-rule double. While I didn't see it myself, it appears Clay Zavada was protecting a colleague as he warmed in the visitors' bullpen [which at Wrigley, is open to play, in foul territory]. A fair ball hit down the line headed towards them, and Zavada reflexively grabbed it. Two bases for everyone.

A walk to load the bases with one out signalled the end of Buckner, and it was still a quality start, even though his replacement Blaine Boyer gave up an RBI single and RBI groundout. Buckner's final line was a credible 6.1 innings of work, resulting in three earned runs on six hits and four walks, with five K's. Behind him, Boyer, Scott Schoeneweis and Zavada - pitching in front of a number of family and friends - retired the final eight batters they faced, throwing only 29 pitches. The Cubs players were clearly in no mood to hang around: hard to say which was chillier, the weather or the reception from their fans.

Meanwhile, the Diamondbacks had continued to add on. Byrnes homered in the sixth. Ryal had a sacrifice fly in the seventh and, later that same inning, Byrnes singled in another run, making the score 10-0 at that point. Finally, with two ours in the ninth, Young singled - he needed a triple for the cycle - and Byrnes completed the rout of Chicago with another home-run. It's been a long time since Eric has his last multihomer game: the best part of three seasons, in fact, since his last came on  May 30th, 2007, against Philadelphia.

Chris Young continues to smack the ball about, with four hits and a walk today. In the past month, with over 100 PA's, his line is now .299/.382/.567, with seven home-runs. That's a good month by anyone's standards, and if the tail-end of the season has had any bright-spots, today was a showcase for them. We've seen the possible resurrection of Young, and the potential conversion of Buckner into a credible member of the 2010 rotation [if he can just stretch out his stamina a little further....] Drew, returned to the two-hole, responded with three hits, and lead-off man Ryan Roberts had a couple as well.

All told, a fine performance, even against a Cubs line-up missing most of its biggest stars for one reason or another e.g. Soriano and Lee. It's been a while since the Diamondbacks have managed such a convincing victory. Indeed, the last time we won by more than three runs was SnakePitFest, thirty games ago on August 29th! Even exclusing the 2007 post-season sweep, it runs Arizona's franchise record against the Cubs since 2004 to 22-13- the best we have against any NL side. We're also the only visiting NL team with a winning record at Wrigley, having gone 22-20  lifetime there. 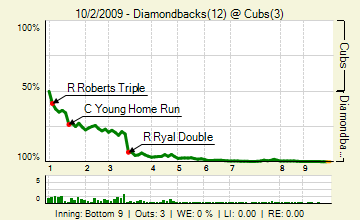 Curiously, despite a four-hit, two-homer, five RBI day, Eric Byrnes' contribution was only worth 1.8% to our Win Probability. That's because he made an out his first time up - by the time he got a hit, we were already six runs up, and there was only about 5% of Win Probability left to be earned over the entire rest of the game. Seemed to be some technical difficulties in the GDT: it never auto-refreshed for me at all. This and the unexpectedly early start may help explain the low turnout: 177 comments, among 15 people. I pipped pygalgia, and we were the only people to pass twenty. Also present, however: kishi, snakecharmer, GuruB, piratedan7, older fart, Turambar, 4 Corners Fan, AJforAZ, hotclaws, soco, emilylovesthedbacks, asteroid and Wailord.

Think I just might watch the replay of this one tonight, and amaze Mrs. SnakePit with my astute predictions of good games for Byrnes and Young... Right up until she starts to wonder why it's still daylight in Chicago!