"If this series was a sick pet, it would have been euthanized already." Thus spoke piratedan7 in the Gameday Thread this afternoon, and it's hard to argue with that assessment - the Fox Sports Arizona decision not to televise this must've felt more like an act of charitable relief than any kind of punishment. Since I was probably one of the few SnakePitters who could see the game - since I was, well, at the game - I emailed Jim and offered to recap this one. (Thanks for starting it!) Of course, I think I offered in the 3rd or 4th inning, when the score was still somewhat decent!

Dan Haren finished the season on a down note, as he was tagged with five runs for his third consecutive start. Meanwhile Tim Lincecum took a one-hitter into the eighth inning, and only a late flurry by Arizona against the Giants bullpen made the score semi-respectable. However, they couldn't prevent the sweep and the Diamondbacks head to Chicago needing to take two of there three to reach the 70-win plateau.

Discussion of poor defense, few base runners, and missed opportunities to follow. Or, business as usual for your 2009 Diamondbacks. (Now with photos from the game.)

The last marquee matchup of the season did not live up to its billing. Well, not by Diamondbacks starter Dan Haren. Haren kept the Giants scoreless through the first three innings, but was quite rattled in the 4th. Two singles and a throwing error by Justin Upton led to the first run of the inning. Pablo Sandoval should have had just a double to right, but the 'JUpzooka' canon arm in right field threw over the head of Mark Reynolds at 3rd base and the ball went into the dugout, allowing Andres Torres to score. Bengie Molina then doubled to score Sandoval, and Rich Aurilia's ground ball to second was too slow to turn the double play, scoring Molina for run number 3 of the inning.

In between some of these scores, there was the minor issue of both our pitching coach Mel Stottlemyre and manager A.J. Hinch getting ejected for arguing balls and strikes. Haren was incredibly frustrated with the strike zone all day (he had previously 'discussed' it with home plate umpire Hunter Wendelstedt in his own at-bat) and had just about had it during Aurilia's at-bat. He gestured in the direction of the Giants' dugout - seemingly saying "That was a strike for them" - and Stottlemyre came out to help calm Haren down. Stottlemyre argued enough about the zone to get tossed, and Hinch followed suit a few minutes later.

The infielders come in to settle down Haren

Haren stayed in the game and pitched 6 full innings, but he gave up two more runs in the next two innings. Andres Torres's home run to right looked like it was high off the foul pole (fair pole!), and some small ball drove in the fifth run for the Giants (Randy Winn) in the 6th inning. Honestly, Haren wasn't that bad, he just also wasn't that good. There were a lot of breaks that went the Giants' way. Ground balls were just out of the reach of diving infielders, fly balls fell in just in front of the outfielders, and line drives were just barely fair. Haren's line for the day: 6 IP, 5 R, 4 ER, 9 H, 1 BB, 7 Ks. I know Haren's very disappointed in how he ended his season, and he seems like he's a little closer to solving his second-half-slump issues. It's always fun to see Haren pitch.

Meanwhile, Tim Lincecum was dealing today. Yes, he seemed to get the benefit of a few calls, but I couldn't really tell much about the strikezone from my seats. He kept the hitters off-balance all afternoon, allowing only 1 hit (to Chad Tracy) through his first 7 innings. Lincecum had broken up his perfect game on his own in the 5th, hitting Chris Young in the head with a breaking ball that didn't break (Young was checked out and stayed in the game) and walking Miguel Montero. But Mark Reynolds struck out (twice on the day - 215 for the year now) and the Diamondbacks wouldn't get another base runner until the 8th.

Tim Lincecum started the 8th inning, but it was clear he was gassed. He allowed a single to Gerardo Parra, then his 100th pitch was Ball 4 to Chad Tracy. Augie Ojeda singled off of reliever Bob Howry to load the bases with no outs - what could possibly go wrong?? Well, Eric Byrnes pinch hit for Leo Rosales, so what do you think happened?? If you guessed "Popped out to catcher," you would be 100% correct. (But it wasn't very hard to guess, so it's not like you get props for that one.)

Eric Byrnes, up with the bases loaded

He pops out to catcher, per usual

I was a little worried when Dan Runzler came in, because this kid is a flamethrower, but Stephen Drew smacked a single to left and Justin Upton followed with one up the middle to score the 3 original base runners.

The three runs would have made the score a respectable 5 to 3 except San Francisco had scored 2 more runs in the 7th off of Leo Rosales. The Diamondbacks went down pretty quietly against Randy Johnson in the 9th, and just like that, the game was over, and the Giants won 7 to 3. The Giants took the season series 13-5 over the Diamondbacks, and won 7 of those here at AT&T Park, 5 of which I was present for. I think they like to torture me. 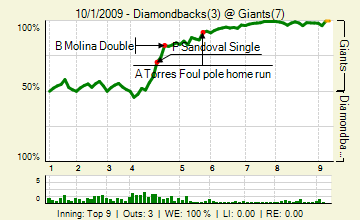 No TV made for a very quiet gameday thread (which stayed relatively on-topic until somebody brought up football). Jim lead the way with 47 comments, 'Skins in second with 41. All present were: piratedan7, Jim McLennan, Azreous, txzona, victor frankenstein, SaveUsY2J, older fart, Wailord, DbacksSkins, jazzbo13, katers, Sprankton, and kishi.

Keep an eye out for some extra special photos later on!