Diamondbacks 1, Giants 4: Penny For Your Naughts

Share All sharing options for: Diamondbacks 1, Giants 4: Penny For Your Naughts

For my final recap of the season, I had high hopes that the Diamondbacks would do something interesting that also qualified as "good." You know, scoring more than three runs, not having any baserunning gaffes, getting a dominating performance from the starting pitcher...that kind of stuff. Instead, I got another abysmal offensive performance, the pitcher caught in a rundown, and Kevin Mulvey on the mound. Thank you, baseball gods. Thanks a lot.

Meanwhile, a Diamondback from the days of yore (Brad Penny) licked his chops about the prospects of facing the mighty Arizona lineup, and the only positive that could be gleaned from this game was that its completion moved us one game closer to the end of the season. Good times.

Still, I hedged my bets that this game would be uninteresting and did something else on the side for the season finale. There's a trivia contest inside, although I'm unable to offer any prizes other than compliments about how smart you are. Maybe that'll take the edge off more than reading about another boring loss.

An actual recap, and details about the quiz, after the jump...

The Diamondbacks had opportunities in the early going, but wasted just about all of them. Stephen Drew singled on a deep grounder to start the game, but two outs quickly followed. Miguel Montero slapped a base hit opposite field to move Drew into scoring position, but Mark Reynolds struck out (take a drink!) and the inning was over.

The worst inning was probably the third. Mulvey actually helped his own cause with a base hit up the middle to lead things off. Drew followed with his second hit to put two on with nobody out, but things unraveled from there. Roberts grounded into a fielder's choice, but the Giants were unable to turn two on it. With runners on the corners and one out, Justin Upton struck out. Montero had a chance to deliver a timely hit, but after the first pitch, Mulvey was caught leaning too far off the bag at third, and was tagged out after a brief rundown. Nothing like pitchers killing offensive rallies to make you want to change the channel.

The exception was in the fourth, when Penny essentially ruined his own shutout. Reynolds hit a line drive to left for a base hit with one out, and Parra followed with a fielder's choice. With two outs, Eric Byrnes hit a comebacker that Penny threw away so badly, both runners were able to advance three bases -- Parra scored from first, and Byrnes ended up on third. Brandon Allen followed with a walk, but that brought up Kevin Mulvey, and unsurprisingly the inning ended shortly thereafter.

That was it for the Diamondbacks' offense. They went down in order four of the last five innings, the blip being a Byrnes single to lead off the seventh (which, of course, was entirely wasted). Penny faced just that one batter over the minimum on his way to a complete game. He needed just 109 pitches to go the distance, and ended with the following line: 9 IP, 6 H, 0 ER, 1 BB, 5 K. There's a good chance that his fourth-inning error was the only thing between him and a shutout.

On the other side, Mulvey really didn't pitch that badly, but one disjointed inning ruined an otherwise decent line. After working around a leadoff single in the first, Mulvey gave up a three spot in the second, facing six batters in a row without a positive result (even the two outs were sacrifices). Two singles, a HBP, a two-run single, a sac bunt and a sac fly left Mulvey staring at a 3-0 deficit before he could finally get out of the inning. He also gave up a solo shot off the foul pole to Eli Whiteside in the fourth inning, but outside of the second frame, he gave up just two hits, a run and a walk in the other five. His final numbers aren't too bad -- 6 IP, 5 H, 4 ER, 1 BB, 4 K, 82 pitches -- but we're going to need something better than a 7.04 ERA from him if he's going to crack the rotation next season.

The bullpen gave us a couple innings of solid work in an otherwise meaningless cause. Boyer and Schlereth each pitched a scoreless frame; Boyer only surrendered a hit and worked through on an efficient 10 pitches, and Schlereth worked around a walk while striking out a pair. Moral victories don't mean much in September, but I guess it was nice to see. 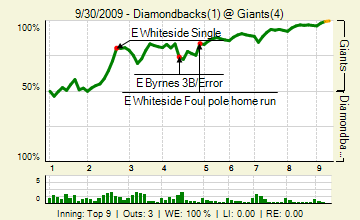 Mulvey's hiccup inning pretty much reserved him a place as the GEoS. Roberts and Upton both put up 0-fers and were punished accordingly. Byrnes was one of only four players in the positive, although his involvement in that success is arguable, since Penny did most of the work.

For the Diamondbacks, Drew had a pair of hits and was the only Arizona player to reach twice. Montero's average dipped below .300 again, and Upton's bad day is bringing him perilously close as well (.304). The pitching has already been covered, so that's about all that's worth mentioning for the D-backs tonight. For the Giants, Pablo Sandoval had a pair of walks, but Whiteside did all the damage -- three hits in three at-bats, including the home run.

The loss gives the Diamondbacks 90 on the season, and they've got just four games left to pick up a couple more victories and get to 70 in the win column. They'll conclude this series against the Giants tomorrow in a 12:45 start, with Dan Haren on the mound against Tim Lincecum -- but as documented before, the game doesn't have any local TV coverage, so good luck watching the two aces in action in their final starts.

Hey, enough downtrodden stuff. As an added bonus before the end of the "interesting" game recaps this season, I've put together a quiz to test your knowledge of the Arizona Diamondbacks this season. After all, you should be expected to get a test at the end of a term, right? Keep in mind, there's a reason you can't spell trivial without "trivia," as some of the questions will be more obscure than others. Sure, you could go to baseball-reference.com or Google or something and get 100 percent, but that's not really the point. If you're into this kind of stuff, hopefully you get a few minutes of enjoyment out of it. If not, you can pretend it never happened. Either way, here's the quiz. Good luck...