Randy Johnson pitched his 100th career complete game, and finally notched win #295, when Chris Young walked on a full-count, with the bases loaded in the bottom in the ninth. The victory allowed the Diamondbacks to complete the sweep, ending the season against the Rockies at 15-3, and also finish with a winning record.

Johnson was magnificent: the only run he allowed was an unearned one, coming after Reynolds' 35th error of the season, a wild throw which Tracy couldn't glove, only deflect into the stands. That allowed the first Colorado batter of the game to trot to second: he was sacrificed to third and came home on a wild pitch. However, Johnson allowed just the two hits, both singles, and one walk the rest of the way, facing only three batters over the minimum in his first nine-inning effort since June 2005. He struck out nine and threw 105 pitches, 75 for strikes. He ends with 173 K's, the most ever in the National League by a player his age - only Nolan Ryan [203 in 1991] has more in the AL.

The crowd seemed to be highly appreciative of him, with several standing ovations from those in attendance. The first came after he ended the seventh, but there was another when he went out for the ninth inning and, finally, after retiring the Rockies in order there. He also got a curtain-call, returning to the top of the dugout steps and tipping his cap to the fans. Will he be back in 2009? We'll have to wait and see. But I think, needing five more wins to reach a milestone, he would certainly be amenable to returning. It would, however, probably help our case in convincing the Big Unit to come back if Mark Reynolds was not playing third...

The pattern of this game followed the same as the previous ones, with the Rockies taking the lead early on, but their bullpen unable to hold it. The Diamondbacks struggled brutally against Ubaldo Jimenez, managing only three hits in seven innings, striking out ten times. Every started ended the day with at least one K: Reynolds added two to his record-setting total, to finish on 204. Ryan Howard was used only as a pinch-hitter today, and ended with the same total as last year, 199. Young drove in both runs and had two hits, including his 22nd homer, as well as the game-winning walk, Miguel Montero walked twice, while Adam Dunn and Reynolds each had a hit and a walk. Credit is also due to Jeff Salazar, who drew a walk of his own as a pinch-hitter for Johnson, to load the bases for Young.

The Diamondbacks did have some chances earlier on - Jimenez didn't have a clean inning until the fifth. They had two on with one out in the sixth, but that threat was ended when Dunn got himself picked off second. In the eighth, after Young homered off Corpas to tie the score up at one, Dunn doubled with two outs, but Upton lined out to the shortstop. After Johnson chewed up and spit out the Rockies in the top of the ninth, Montero walked and pinch-runner Romero was singled across to third by Augie Ojeda. Salazar drew a full-count walk and Young followed suit, making a loser of former Diamondback Luis Vizcaino,

It was perhaps not the most dramatic of walk-off wins - a walk-off balk, as per Tyler Bucholz of the Rockies earlier this month, might have been the only more anti-climactic victory in the circumstances. However, anything that got Johnson a W, could only be appreciated for that. Young's homer took the Big Unit off the hook for the loss and that would have been even worse. Only one starting pitcher this year has thrown a complete game, allowed no earned runs and still got the L - Mark Buerhle, who was victimized by two unearned runs for the White Sox against Toronto on May 2nd. The last National League pitcher to suffer that fate was Darren Oliver, over five years back, for the Rockies in August 2003. Johnson deserved a great deal better than that. 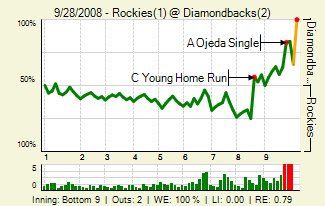 I think most people's attention was elsewhere today - whether on the playoff races climaxing elsewhere, the second-quarter implosion of the Arizona Cardinals, or Tim Lincecum's final start of the year. As a result, it's a short roll-call thread. Present in this one were snakecharmer, kishi, unnamedDBacksfan, Scrbl, AZWILDCATS, Diamondhacks, Azreous, Wailord and emilylovesthedbacks, so thanks to them for their comments. Will the last person out of the Gameday Thread please remember to turn the lights out at Chase?

The playoff brackets were completed in the National, with no need for any playoffs, thanks to the Mets going down to the Marlins. Milwaukee will be the NL Wild Card, and so the Cubs face the Dodgers with the Brewers taking on the Phillies. It must be tremendously exciting for the Milwaukee fans, with the last time their team saw playoff action being all the way back in 1982 - congratulations to them. We'll have to wait and see whether CC Sabathia's arm is still attached to his shoulder. For the Junior Circuit, the Twins have the edge after their victory, but the White Sox also won, so they have to face Detroit fin a make-up game tomorrow. And if they win that, it's the Twins on Tuesday in a decider to see who faces Tampa Bay. Fun times in the windy city.