Share All sharing options for: Diamondbacks 8, Giants 2: Return to Form

There. That's better. After the gargling vortex of defensive ineptness and general poor play which were the defining characteristics of yesterday, this counts as a fairly well-played game. We score runs in six different innings, accumulate double-digits in hits, while our starter gives us a quality outing, the bullpen holds firm, and our defense is charged with precisely zero errors. The D-sucks of yesterday have left the building, and you will not hear me calling them back for an encore.

No Mark Reynolds in the lineup, with Melvin saying "He’s a little banged up... His back’s a little bit sore and his shin is sore." No kidding. Special K's swandive into the photo-pit at ThisSpaceForRent Park is the most hardcore thing I've ever seen in sports entertainment, save perhaps the infamous 1998 Undertakes vs. Mankind Hell in a Cell match. My first thought when it happened, was that we might just have seen the first baseball player killed in a major-league game, since Cleveland Indian shortstop Ray Chapman, in 1920. That Reynolds got up and walked away under his own steam was remarkable enough; that he rejoined the game is...well, let's just say, enjoy your day off, Mark.

Micah Owings continued his excellent start to the season, picking up his third win of the season, and allowing only one run over six innings of work. He didn't allow a hit until the fourth innings, and ended up allowing only three hits and two walks, with six K's. The bullpen bent but didn't break too badly: Peña allowed a run, but Qualls bounced back to fan two in his inning of work. Lyon was run out to get some work, but he continued to be less solid than we would like. Despite coming in with a six-run lead, he loaded the bases with one out, on two singles and a walk, before getting Winn and Durham to fly out. No runs allowed though.

Good to see the offense roar back too, with Young and Jackson each going 2-for-4, with a walk and a homer: Chris drove in two runs, Conor three. Eric Byrnes had two hits and a walk as well, though Orlando Hudson's K-less streak, which ended on Sunday, is now utterly dead, after he struck out three times this afternoon - that is more times than during his previous seventeen games and 64 at-bats, put together. Hudson, Byrnes, Justin Upton and Young, were all wearing #42, as was first-base coach Lee Tinsley, in honor of Jackie Robinson Day. You may be thinking, "Hmmm: one of those things is not like the other..." However, we went through this last year too - here's Eric's explanation in 2007:

"In my mind if there was one person who was not African-American in the Major Leagues who was going to wear his number it was going to be me," Byrnes said. "Just because when I was in college, my thesis statement was on Jackie Robinson. It was a 60- to 80-page report about Jackie Robinson and who he was as a person, an athlete and a social pioneer. I became infatuated with him and his story."

Byrnes also says he got an A-minus for his paper. :-) No sure I like all these afternoon starts, though I can see the reason for the one today - the 50th anniversary of the Giants moving to San Francisco, so the start time of 1:34pm exactly mirrored the very first game they played. However, we have another day game tomorrow, and that will make seven of the eleven weekday games thus far, which have begun at 4:10 pm, Arizona time, or earlier. This does limit the depth I can go into these games, because when I am work, all I have to go on is a) a very small Yahoo Gameday window; b) the box-score, and c) the comments people post in the Gameday Thread.

I suppose I could Tivo the game and watch it when I come home at night - I was just watching a little of the replay on FSAZ - but if I know what the score is, that sucks away a lot of the enjoyment for me. And I am hopeless at the whole "avoiding the score" thing: if there is a game on, I am simply unable to resist peeking at the ticker to see how it's going, and then everything tends to go downhill from there! The schedule does seem more favorable for the rest of the month, so I'm looking forward to seeing a few more games. 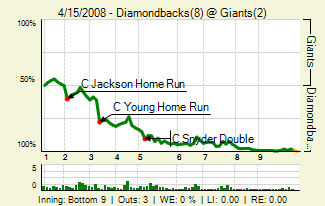 This afternoon, activity was, unsurprisingly, back down towards more normal levels - snakecharmer was at the game by the bay, so we'll get a report from her in due course, no doubt. Attendance, however, was still pretty good: present here were DbacksSkins, Wimb, Azreous, jsk6788, kishi, Muu, dstorm, hotclaws, TwinnerA, Craig from Az, Mr. Philosophical, Phoenix Stan [welcome, in from our SB Nation sister blog about the Suns], friendly visiting fans groug and paboperfecto, peachy rex, Stile4aly, soco, peeklay, 4 Corners Fan, batster and singaporedbacksfan.

A few injury updates. Edgar Gonzalez had an infected tooth removed, which had caused him some dizziness during Sunday's rather brief outing. However, he is not expected to miss any time as a result of this - his next outing is uncertain, simply because it depends on whether or not they decide the Big Unit needs an extra day off or not [possible because of Thursday's off day]. Miguel Montero is rehabbing down in Tucson, and is expected to get 30 or 40 at-bats before before being recalled, which could be later this month. Chad Tracy is still some way off being ready still; he could start his rehab assignment after the team returns from California after tomorrow's game, but nothing has been decided there. He came down with a viral infection last week, which has slowed things down.