Share All sharing options for: Fielding Metrics, Part 2: Hacking Into the Jungle

As I bravely continue on, into the more abstruse end of defensive metrics, I must confess, there is a certain amount of faith required here. The raw data and computations required for these advanced measures have a tendency to be not readily available and/or easy to understand. This makes me somewhat wary of them: if I'm told Player X is batting .375, I know where to find the information necessary to verify this. But if I'm told Player X has a UZR of +2.2, I have little or no way to check if this is correct. I just have to assume the creator hasn't misplaced a decimal point somewhere. With that caveat, let's plow in.

To go into deep analysis, you need more specific information about the precise location of every batted ball. This kind of detail is not easily found, and you tend to have to pay one of the two services for it: Stats, Inc or Baseball Info Solutions. That's at the moment: I can imagine, as we go forward, that this data will eventually become more generally available, in much the same way that detailed splits for hitters are now accessible to all. [As an aside, BIS are looking for minor-league scorekeepers for next season, to attend games and record them. However, their list of locations for 2009 includes Tucson: Might be a bit quiet around there.]

Let's start off at Baseball Musings, where David Pinto uses the batted-ball information from BIS, works out the odds of each ball being converted into an out, and uses this to come up with a Probabilistic Model of Range - the number of outs a team would be expected to get, based on where the balls were hit, and compares this to the number actually recorded. By this measure, the Diamondbacks came out almost exactly average, recording just five outs more than the were expected to get. However, there were wide variations between our performance at the various positions. Here are the figures for each, and the results for our players who had most time at the position.

They also give the number of expected and actual outs by pitcher, and thus which pitchers were helped or hurt by how their defenses played behind them. The results for Arizona are: Owings +4.2; Davis +4.8; Haren +6.4; Webb -2.4; Johnson -4.2. So if it often seemed last season, that Johnson was the unfortunate victim of poor fielding, there would appear to be some factual merit to the feeling. However, as the figures for pitchers suggest, to a certain extent, he was as much a part of the problem himself as anything.

Pinto also provides charts which show how an individual player's performance varies, depending on the location of the balls hit to him. Here is one of the charts for Justin Upton, for example: 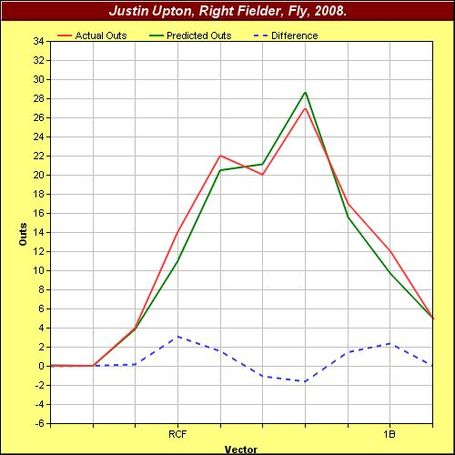 To read this chart. imagine you're at home plate. looking over at right-field. The X-axis [the horizontal one] covers the territory belonging to the RF, from center-field on the left, across to the first-base line and on into foul territory on the right. The Y-axis [vertical] counts outs made, and expected to be made, in that zone; the red line is the number actually converted and the green is what an average player would make. The dashed line is the difference between expected and actual performance. Charts are available for fly-balls, liners and two categories that cover the ground in the middle.

This may help explain the debate over Upton's defense. If you look at the chart, you will see that he has trouble with balls basically hit right at him, turning those into outs at well below average rates. But look how the line goes sharply up when the ball is hit to his left or right. And the further right or further left, the more balls above average he is turning into outs.Clearly there is evidence here for his speed and incredible athletic talent. When he can get on his horse and go get it, he can reach places few outfielders can get to. But more experienced outfielders will handle the balls hit towards them better than Justin does at this point.

You can't teach speed, or the ability to go deep into gaps and take away extra base hits.  He's already getting a lot more of those than the average fielder, and thats why the defense metrics like him. It'll be interesting to see how these charts will look as he gets better at making reads and taking even better routes to the ball, something which only comes with experience. In the meantime, I'd expect him to start handling balls hit right at him and not get caught in between on sinking liners quite so often. Thats something he can definitely learn and improve on over time, so we'll see if that middle dip fills in this season.

Similar to this is The Fielding Bible, which uses a plus/minus system to rate fielders. This was another invention of John Dewan, and works as follows. Based on the location, type (fly ball, line drive, etc.), and how hard the ball was hit, he comes up with a percentage change of an average player making the play. Say this figure is 20%. If the fielder succeeds he gets credit of 1 - 0.2 = +0.8. plays above average. If he fails, he gets a black mark, to the tune of 0 - 0.2 = -0.2 plays above average. Do this for every ball put into play, and adds up the results for each player: the result is the player's plus/minus.

The full stats for 2008 can only be found in the book, but the leaders can be found on the website, covering the top ten and bottom half a dozen players in the majors. The first one listed is among the leaders at second-base...but it's not who you'd expect. Rather than Orlando Hudson, sitting at #10 is Augie Ojeda, with a +6 rating. After this pleasant surprise, the news is not so good for new arrival Felipe Lopez, who sits tied for third-from-last, with a -12 score. Marginally worse - second bottom at -13 - is Mark Reynolds, though despite the league-leading errors, he's still a lot better than last-placed Edwin Encarnacion, a startling -21. Finally on the infield, our late season replacement, David Eckstein, rates -12 too, albeit at shortstop rather than the position he played for us.

Moving to the outfield, the third-best left-fielder in the major-leagues for 2008, according to the plus/minus system was.... Conor Jackson. Yes, CoJack rates a sturdy +14, ahead of the likes of Holliday, Willingham and Braun. I'm uncertain if these number have been scaled for time played, but if not, it's an even more impressive result, given Jackson started 66 only games in left. Moving to center, Chris Young is also rated third at the position, with +23; as noted previously, this is part of the evidence that Young was robbed in this year's Gold Gloves. Especially when the actual winner, Nate McLouth was dead-last at -40. Oh, and I forgot the pitchers, where the Diamondbacks find representation at both ends. Equal-sixth, at +5 is Brandon Webb, but dead-last was the Big Unit, scoring a -7.

Let's take an intermission, before going on for what I promise will be the last part, in case the heads of those less-sabermetrically inclined start popping like Rice Krispies! One thing to mention though. Regardless of whether the net result is measured in plays, runs or Arcturan megacredits, you should be leery about doing any kind of straight comparisons between positions. Basically, a +10 at shortstop, almost regardless of the scale, is a better fielder, and more valuable, than a +10 at first-base.  There's a lot of discussion over whether and exactly how these positional adjustments should be integrated into the numbers. For the moment, it's probably just something to bear in mind when looking at the numbers; exercise caution if trying to draw conclusions across positions.