The Winter (Meetings) of our Discontent: Day 4

Share All sharing options for: The Winter (Meetings) of our Discontent: Day 4

Jon Heyman says Arizona has signed Felipe Lopez; if true, this would be the first major move for the team at the winter meetings. He reports it's a $3.5-million deal for one-year. This might help defuse Nick Piecoro, since sarcasm positively drips from him as he describes our re-signing of Augie Ojeda in today's Republic. "At least now no one can accuse the Diamondbacks of getting nothing done at the winter meetings." I guess he must have some Brit in his ancestry, even if I thought that kind of thing was beaten out of you in journalism school? He also calls Lopez "a frustrating player whose effort has been questioned, but also one with perhaps more upside than any other available second baseman."

One suspects this perhaps buries the speculation reported by ESPN, which says, "The Diamondbacks and Red Sox are reportedly discussing a trade of Eric Byrnes and Julio Lugo." [It probably also ends the Wigginton and Johnson rumors]. This would basically have been a swap of unpleasant contracts  over the next couple of seasons: Byrnes gets $22 million, Lugo $18 million, though would at least have filled the hole at second. We may still be trying to shift Byrnes to the Sox, who do seem to have some interest in his position, and reaction from the Red Sox Nation is curiously gung-ho on the thought of acquiring Flipper.

Rule 5 Draft takes place today: Piecoro [link above] quote Josh Byrnes as saying, "the Diamondbacks might be active in today's Rule 5 draft, perhaps pursuing a left-handed reliever or an infielder." However, the rumor posted on the Diamondbacks site has us after 1B/OF Jordan Brown from the Indians. The 25-year old was the Double-A Eastern League MVP in 2007, and hit .281/.337/.417 at the Triple-A level last year. The report reckons we would need to trade up in the draft (we're currently #15) to get Brown, but whether that's something we're going to do is doubtful. Unlike the main draft, teams can trade players for draft picks, or even buy them. .

I'm trying to remember the last time the team picked up someone in this draft, and I can't recall it ever happening. Nice though it would be to get someone like Santana, Victorino, Josh Hamilton or - pausing to wince - Uggla, it has to be admitted that most Rule 5 picks never pan out to quite the same extent. Still, for $50,000, it's a relatively low-risk gamble. We'll see what happens: the draft got under way at 10 am (Arizona time).

Arizona selects James Skelton from Detroit. He's a catcher who had a cup of coffee in the majors last season, but was mostly at High-A and Double-A. By the rules of the draft, he has to be on the major-league roster all season, or be offered back to his original team, so this makes me think that Montero or Snyder will likely be traded away between now and Opening Day. Here are Skelton's minor-league stats and a good article on him. He seems very small for a catcher - 5'11" and just 165 lbs: the average top 20 catcher in MLB outweighs Skelton by 50 pounds. There is some discussion in the article on moving him to second, where his size would be more in line with the average. But look at that OBP: .456, with more walks than strikeouts [94:91]. An intriguing choice. No other gains or losses for the Diamondbacks in the other areas of the draft.

Better Red than Dead for Rhodes. Fox Sports reports the Diamondbacks have lost left-handed reliever Arthur Rhodes to the Cincinnati Reds, on a two-year, $4 million deal. Bring on the next southpaw candidate for the bullpen!

Helter Skelton, coming down fast.... Nick Piecoro has more on our new catcher from the Rule 5 Draft. He quotes Assistant GM Peter Woodfork as saying he may be used as a third catcher, and director of player personnel Jerry Dipoto adds,  "As with most young catchers, the catch/throw part of the game is a work in progress. We’re of the mind-set he’ll get in early and we’ll work on it. But he’s gotten this far. It’s a pretty unique opportunity I think to acquire a guy who has plus offensive skills behind the plate." 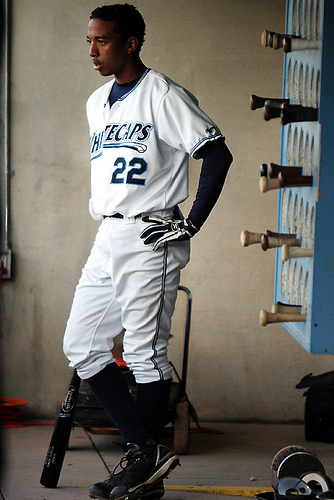 A fan-post by Paul Thomas, on our colleagues over at Beyond the Box Score was also very keen on him, calling Skelton "the most attractive position player Rule 5 candidate I've seen in some time." And fans in Detroit are not happy with the move: Ian Casselberry of Bless You Boys asks, "Would it be an exaggeration to say that Tiger Town's worst Rule 5 draft nightmare happened this afternoon?" though admits this is likely hyperbole. The site also had an discussion on the Tigers' decision to leave Skelton unprotected.

Back at the beginning of the season, the Tigers site had this piece on Skelton, "Center fielder Freddy Guzman, a smaller player himself, took a look at Skelton and thought he was either a second baseman or a pitcher until he saw the catcher's mitt. "I had it growing up, the whole way through," Skelton said. "I've always been a smaller guy on the team, everywhere I go. But I've just always loved catching."

Just as a side-note to my comments above, 'Jack' Skelton [at 165 lbs, that seems an appropriate nickname!] is definitely not the first pick by Arizona in the Rule 5 draft. Just last year, in the Double-A portion, the Diamondbacks picked up 1B Balthazar Lopez from Anaheim. As this was the Double-A portion, he didn't have to be on the major-league roster, and I think he played in the Mexican League last season. With the first pick of the December 2004 draft, we selected Angel Garcia from the Twins, but later sold him on to Tampa. And way back in 1997, before the team came into full operation, we chose Stephen Randolph from the Yankees. Overall, however, the team has seen a lot more players depart than we've gained. Dan Uggla is, obviously, the best-known, but in 2002, we lost Javier Lopez and Luis Ayala, both of whom would go on to reach the majors.