The GM winter meetings: nice work, if you can get it

Share All sharing options for: The GM winter meetings: nice work, if you can get it 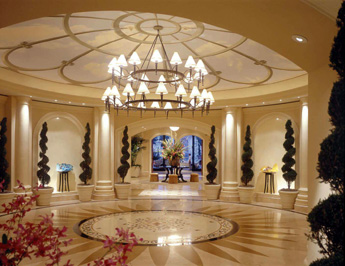 "...and now let me show you the larger closet."

Josh Byrnes left the winter general managers' meeting in the palatial St. Regis Resort, on the coast midway between LA and San Diego, with nothing to show for it except, one imagines, a sizable bill [rooms there start at $745 per night, with room-service OJ and cereal for twenty bucks]. The biggest piece of Diamondbacks news to come out during the past few days was not a replacement for Orlando Hudson, the re-signing of Randy Johnson, or details of contract talks with Brandon Webb. It was that the pool at Chase will be sponsored by RideNow Powersports, a Tempe company who will be replacing the bankrupt Paddock Pools. Stop the presses!

In view of that, and the current economy, I think Nick P might have trouble convincing his Republic masters of the need to let him go to the next set of meetings. That's in Las Vegas from December 8-11, and they'll want him to come back with something more substantial than a pair of lap-dancer scented pants [though that might just be me - back in my bachelor days, of course. :-)] Still, he does a decent job of basically writing about nothing, even using the word "plethora," in what may be a Three Amigos reference. That refers to the options available at second-base, described as, "A market in which supply might outweigh demand." There also does not seem to be any one outstanding candidate: Hudson is the only Type-A on the market, and he's not returning. Beyond him, are a bunch of mid-level second-baseman who are free-agents and would likely be adequate.

Ramon Vazquez is Steve Gilbert's pick to click, with an important factor being that he's left-handed, so would help balance our overwhelmingly rightie-skewed lineup. On the other hand, he has what can only be described as a contract year: yes, he hit .290, but that's on the heels of four awful seasons. From 2004-2007, he hit .235, .212, .209 and .230 with a total of ten homers, and his career OPS+ is a weak 85. There's no doubt some team will pay for him based on last season, and unless this 32-year old has suddenly figured out how to hit, will end up overpaying. I'd rather that team wasn't Arizona.

Then there's Felipe Lopez, who apparently "would love to play for the Diamondbacks." The question there would be, which Lopez do you get? The one who hit .234 with two HR in a hundred games for Washington, and was so bad he got released? Or the one picked up by St. Louis, who apparently realized free-agency was looming, and batted .385 with a .964 OPS from that point on? The likelihood is, as usual, that you'd instead find something in the middle. His career line is .262/.330/.395, and with eight seasons under his belt, that's probably not too far from what you'd receive. However, his agent is Scott Boras, and you know he will be focusing on the last couple of months performance. As another alternative, the Tribune sees Mark Loretta as a possible candidate at second-base.

I'll work on a chart that lists all the free-agent second basemen and their relevant stats, ages and salaries. Still got a few days until free-agent negotiations can actively begin, so expect that next week at some point. The alternative to free-agency is a trade, though there are some issues there: the Diamondbacks' farm system isn't quite brimming with prized prospects at this point, and if you trade any of the established players, you'll be filling one hole by creating another. Ken Rosenthal reports us as in the running for Kelly Johnson, another left-hander, though the story says Johnson won't be going anywhere if his middle-infield partner Yunel Escobar goes to the Padres as part of a trade for Jake Peavy.

Drifting off to discuss that one for a bit, we will, of course, be glad to see the departure of an divisional rival's ace. Though we've actually hit Peavy a lot better than the rest of the division [his record against us is only 11-11 with a 4.80 ERA]. I note that the trade talks are ongoing despite Jake having a no-trade clause and he's lobbing some interesting thoughts into the mix. He'd rather Escobar not be part of any trade with the Braves for him, and no wonder, since Escobar has been ranked among the best SS in the league, a player any pitcher would want behind him. Peavy also wants a similar no-trade clause with his new team. However, the mere fact a player with a no-trade clause is almost certain to be dealt... Are you listening, Eric Byrnes?

Sounds like there could be some chance for Brandon Lyon to return to Arizona - if we want him. His agent says, "Brandon would be thrilled to come back to Arizona. We're going to get some sense of the market and come back to Arizona and have a meeting of the minds. I don't think it would be surprising if he got some multiyear offers from teams." Particularly if the GM concerned slipped into a coma between June 17 and September 12, a period of 27 appearances over which Lyon had an ERA of 9.59. Snark aside, I wouldn't mind getting him back at a reasonable rate, especially as it seems Lyon is not demanding he must be the closer, a role he looks to have lost to Chad Qualls here in Arizona.

if he doesn't sign for us, Lyon is going to be classed as a Type B free-agent, according to the official list of Elias rankings, so we would get some compensation if he goes elsewhere. The other AZ players are as expected: Hudson, Cruz and Dunn are all Type A, while Johnson joins Lyon as a Type B, and we get nothing for Eckstein or Clark. And finally, a quirky little piece. Did you realize that all advertisements in parks have to be scrutinized by someone in the commissioner's office, to make sure they don't interfere with the ability of the players or umpires to track the ball? That someone is Darryl Hamilton, and this is his story.