The Boys of non-Summer: a trip to the Arizona Fall League

Share All sharing options for: The Boys of non-Summer: a trip to the Arizona Fall League 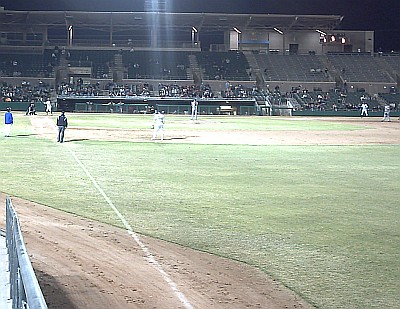 This is the time of year where it is no longer a chore to live in this state: while the rest of the country buckles down and prepares for winter and the shoveling of snow it will entail, we Arizonans are finally emerging from our aestivation [look it up]. Mid-November? You might want to put on a long-sleeved T-shirt if you're going out tonight, it could get a bit chilly after 9pm. Part of the joy involved is two months of bonus professional baseball: as well as the well-known delights of spring training, we also get to enjoy the game live in October, regardless of whether or not our team makes it to the post-season. I think that makes us unique in the continental US [Hawaii also has a winter league - as if living in Hawaii needed any additional bonuses].

The Arizona Fall League started in the early 1990's as a chance for major-league teams to get some of their up-and-coming players, thought of as needing more polish, some additional at-bats or innings. A lot of famous names have played here at one time or another - Jeter, Pujols, Webb, Braun, and it was even the first stop on Michael Jordan's ill-fated attempt to make it to the big-leagues. This year, 36 of the 60 players in the All-Star Game, had passed through the AFL earlier in their career. Team managers, and even umpires, may also go on to greater things: Dusty Baker managed for the first time in the AFL, while the men in blue come from MLB's Umpire Development Program.

Unlike other winter leagues, it's very much developmental, rather than competitive; players can be sent here to work on a specific aspect of their play, and if that does improve, the AFL's job is done, regardless of their ERA or BA. Each franchise can send up to six players, typically Double-A or Triple-A, though players with less than one year's service time in the majors can participate, which is how Max Scherzer saw some action in the early part of the AFL this season. Five major-league teams combine to fill up the 30-man roster of each of the half-dozen sides in the league. This year, the Diamondbacks players were part of the Phoenix Desert Dogs.

Because of the group outing we organized to Chase earlier in the season, we got complimentary tickets to Saturday's game against the Mesa Solar Sox. [Admittedly, general admission seats are only $6, but hey, free baseball is free baseball] It looks like the Diamondbacks are trying to encourage attendance by providing these tickets to groups. It seems to be working, as our game was watched by a healthy crowd of 1,576 - as a yardstick, the other two AFL games that day, had official attendances of 289 and 474, and some of the weekday games are seen by less than two hundred. 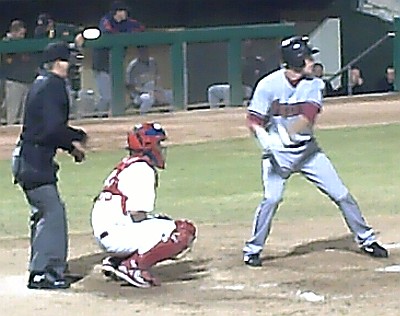 It took place at Hohokam Stadium, and was the first time I'd been to that venue - in spring, it's the home of the Cubs, so my head spins round and I projectile vomit if I go within half a mile of the place. Amusingly, it's located opposite a cemetery, which is presumably where the last hundred seasons of North Side futility go to die. The attendees met up in the parking-lot for a spot of tailgating [thank you, Mrs. SnakePit!] before the game, with faces both old and new - apologies if I didn't get a chance to speak to everyone. You should have got there earlier. ;-) We were there from 5pm, and it was a very pleasant couple of hours as the sun went down.

We were tidying up, and lost contact with most of the rest of the group by the time we got inside, inside the surprisingly-large crowd [we were not the only group in attendance, it appeared - though the others got their names mentioned on the PA, we apparently didn't. Though I may have fallen asleep and missed it, but more on that later!] One of the perils and pleasures of general admission tickets, is that you can sit wherever you want, whether it's to chase foul balls, watch from immediately behind home-plate, or close to one of the dugouts [Ryne Sandberg seemed to be running things for the Solar Sox on this night] You could even move around, though save for a little photo-taking, that was too much like hard work for me. We did eventually locate some of our party, a little up and to the right of home-plate, and settled in with them to watch the game.

It wasn't a brilliant night for the Diamondbacks' prospects who took part in the game. Brooks Brown got the start for the Desert Dogs, and was tagged with the loss, thanks entirely to one poor inning. the third. He loaded the bases with one out, then allowed a two-run single, and a run-scoring ground-out. However, that was the only damage in his five innings, and two hits and two walks are not disastrous. Another Diamondbacks' farm member, Tony Barnette, followed Brown to the mound, and unfortunately also allowed three runs, in only one inning of work: the key blow was a three-run homer by the Marlins' Scott Cousins.

Things started brightly enough for the Arizona hitters, leadoff hitter and Phoenix center-fielder Evan Frey smacking a first-inning double over the head of the left-fielder, and coming home to score on a groundout, giving the Desert Dogs an early lead. However, between there and the ninth inning, the team managed only one more hit. Though both the other Diamondbacks' players on the Dogs' roster started - John Hester at catcher and Rusty Ryal at shortstop - neither of them got a hit, to leave the Arizona trio at 1-for-9 on the night, though Hester got a walk. Still, it was nice to see five of our six in action, the only exception being pitcher Hector Ambriz.

The game move along at a brisk page, ending just before 9:30pm. This was probably no bad thing since, even with Mrs. SnakePit's wise decision to bring along a blanket, it was getting distinctly chilly by that point. As we walked back towards the car, the realization hit that this would likely be the last live baseball we would get the chance to see, until 2009 spring training starts up again in late February next year. We have Thanksgiving, Christmas, New Year and Valentine's Day to get through first: maybe hibernation isn't such a bad idea after all... 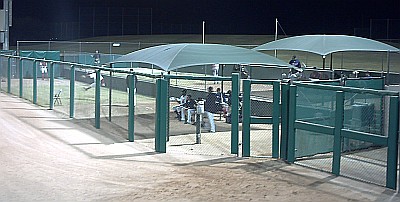