Free-Agent Second Basemen and a farewell to Montero?

Share All sharing options for: Free-Agent Second Basemen and a farewell to Montero?

Here's a table of possible free-agent second basemen that may be available for the Diamondbacks this off-season. Not all of these necessarily played the position full-time [or even at all] in 2008, but I've erred on the side of inclusion. An A or B in brackets after their name indicates their type as a free-agent, which would result in us losing draft picks - though giving the number we should be getting, this shouldn't be much of an issue for the Diamondbacks. Ages are for the 2009 season, and there are a number of name heres we can probably cross off, almost immediately, but again, I'm including them, for the purposes of comparison.

However, it appears the focus may have shifted, with the Tribune now reporting, "The D-Backs now appear more likely to trade for a second baseman to replace free agent Orlando Hudson after sources indicated that veterans such as free agent Mark Loretta or possible trade piece Adam Kennedy are too pricey." Dammit: after I spent all the time on that chart, too. :-) The story, in particular, points at Miguel Montero as the possible focus of a trade on the Diamondbacks end. He does seem somewhat expendable, Montero getting only 184 at-bats last season, thirty less than 2007, even though Chris Snyder missed time on the DL. Of course, Montero wasn't available on Opening Day either, due to slower than expected healing of a finger fractured by a foul-tip in winter ball.

When he did get there, Miggy showed some decent power, with a .765 OPS, and .862 in the second half (albeit in only 89 plate-appearances). He would be cheap too, not even eligible for his first arbitration raise until after this year. This rumbling would tie with another report, which says the Diamondbacks have requested Montero get more time as a catcher in the Venezuelan Winter League, presumably for showcase purposes. There, he has also been playing at first-base and third-base - he was mooted as a possible replacement for Special K, if Reynolds was to go to second.

The story lists Boston, Florida, Cincinnati and Detroit as possible candidates as trade partners, based on their need for catching. Maybe someone like Joe Thurston? He was the Red Sox Triple-A second baseman of choice this year, batting .316 for Pawtucket. He is a left-hander, and with Pedroia at second in Fenway, he isn't going anywhere. However, Thurston is now 29, a bit old to be seeing his rookie season. Maybe we can get Dan Uggla back from the Marlins? Hey, we can dream, and they might be wanting to free up space for Tag Bozied, who had a .951 OPS for them in the minors. Over in Detroit,  Placido Polanco, though their cupboard is fairly bare as far as major-league prospects go. 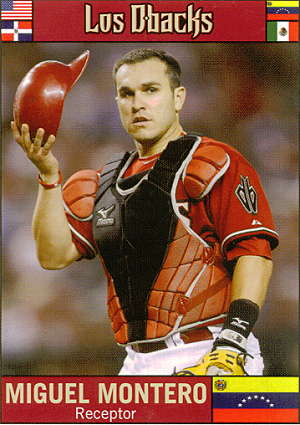 Down in Venezuelan, Montero was transferred in the league, going from the Bravos de Margarita to the Caribes de Anzoátegui.  He said [in Spanish, translation courtesy of Mrs. SnakePit]:

On that team, there were many catchers and we all wanted to play... I expected a change, and I got it. The welcome here was really good. I recognize many of the players, and truthfully, I'm very happy to be here. Simply speaking. I come here to do my job; the rest is in the hands of the manager... [The Diamondbacks] want to give me an opportunity at third-base, take advantage of my bat and give me more game time.. I'm going to do my best, but I'm not  a third baseman, so I can't guarantee a gold-glove or anything like that!