Share All sharing options for: Film review: Eight Men Out 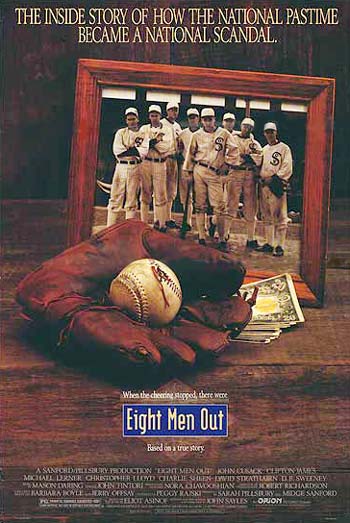 As part of the off-season coverage, I figured I could throw up the occasional baseball-related film review, as such things strayed across my eyeballs. We start with Eight Men Out, John Sayles' adaptation of the book by Eliot Asinof, of the almost same title [it opted for the numeric 8, rather than the word]. They tell the story of the 1919 Chicago White Sox, who threw the World Series that year against the Cincinnati Reds, partly for money, but also - the film suggests - as a means of getting back at Sox owner Charles Comiskey, depicted here as a skinflint. There's undeniably truth in this: the origin of the name 'Chicago Black Sox' is not in the fixed World Series, but before that - at one point, Comiskey tried to charge the players for laundering their uniforms, and the team played in dirty ones as a protest.

This approach does tie in with Sayles' undeniably socialist tendencies, though those were probably expressed more clearly in his other films, such as Matewan, about a coal-miner's strike, brought on by - hmmm.... - a penny-pinching employer. Here, the impression given is that what was arguably the darkest chapter in baseball history, was an unfortunate combination of circumstance: players who were good enough to reach the World Series, but disgruntled enough to accept a bribe, and in an era where they basically could only play for one team [and where $10,000 was enough to buy a player, being more than their entire season's salary]. The split of the White Sox into factions - one well-educated and better paid than the other - also contributed towards to the amenability of some players to corruption.

As a film, it's probably best when concentrating on the motives and the action off the park. It's very much an ensemble piece with no particular star, the focus flowing from instigator Arnold 'Chick' Gandil [Michael Rooker - though he'll always be 'Henry' to us!] through naive country boy 'Shoeless' Joe Jackson [DB Sweeney] and onto aware but incorruptible third-baseman George 'Buck' Weaver [John Cusack] and pitcher Eddie Cicotte [David Strathairn], who turns against Comiskey after being denied a bonus for 'only' winning 29 games, despite being benched to prevent him achieving the goal. Similarly, off the field, scenes cover the journalists, gamblers and even the kids of the era - leading to the poignant (if factually doubtful) scene where a young fan begs Jackson to, "Say it ain't so, Joe."

I was less enthused by the ball-games themselves. There's no real tension when we know the end result, and since it went to eight games [from 1919-21, the World Series was a best of nine], that's a significant amount of running time. Oh, it's impressive that Cusack was coached in playing third-base by Cubs great, Ron Santo, and that Sweeney, a natural righty, learned to play left-handed for the movie. However, there is never any way that actors can ever play baseball as well as real baseball players [of course, the reverse is equally true - as anyone who has seen Randy Johnson's TV commercials knows]. As portrayed here, it's also painfully obvious that the players are throwing the game: I certainly can't blame the catcher for wanting to go kick their asses

The most obvious weakness, personally, is that what we get here is not really why I enjoy most movies based around the sport. Instead of grubby reality, it's the mythic quality that I want to see - present, albeit in radically different ways, in both The Natural and Major League. I am an escapist at heart, and turn to cinema for an alternative to everyday life, where the venal and corrupt can be found...well, on just about every news broadcast. Do you think they'll make a movie about the steroid scandal in 2080? Probably before then, but I doubt I will really have much interest in seeing it [I got bored and drifted off before being able to finish Game of Shadows].

In the end, the film founders on the inevitable problem with all movies that are based on actual events. Real life is rarely theatrically-structured, with three acts and a tidy coda. As a result, something has to give - either the drama or the facts. Usually, it's the latter, with history changed to make things more cinematic and dramatic. Not so here: the painful authenticity and the overall lack of focus combine to make this more plodding than it should be, and it feels just too much like a PBS re-enactment to be entertaining. 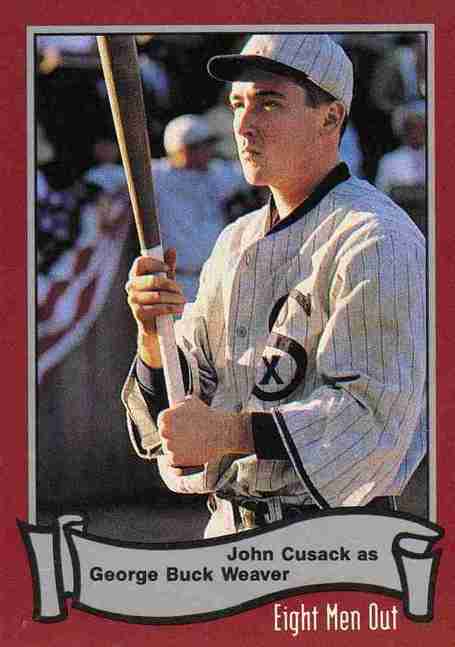