Beyond the Red Carpet...

Share All sharing options for: Beyond the Red Carpet... 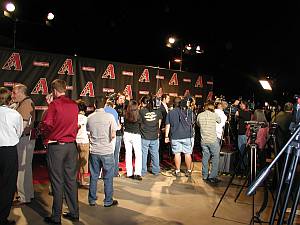 This is the piece in which I tear off the facade of civility from last night's fashion show, and reveal the drunken debauchery which went on behind the scenes. Unfortunately for my career on the muck-raking side of journalism, I got nuttin' - I dashed off to file my story immediately after the show finished, so missed Mark Grace urinating in the fountain. Hey, I can fabricate outrageous BS with the best of 'em. :-)

It was, however, an interesting experience to see what goes on behind the scenes at these events, even if I'm not sure it's something I'd want to do full-time; seemed a bit too much standing around, waiting for stuff to happen. After arriving and checking in, I was shown to my "spot" on the carpet - about every yard or so, a small piece of tape had the name of the publication to which that space was assigned. There seemed a firm order of precedence involved, with the TV stations getting the front of the line, with a nice backdrop against which they got to take their pics. 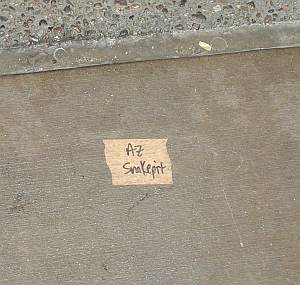 Our territory is marked out.

AZ SnakePit was nestled between Arizona Woman and Business Journal, though I'm not sure either of them turned up. The guys around me were from the Foothills Focus, and I did my best to avoid getting in the way of their, rather more serious, cameras. From about 6pm to just before 7pm, we waited for the celebrity guests to swing past, which they did at variable speed. Some stopped to chat - I was amused by Carlos Quentin's (tongue-in-cheek?) suggestion that he liked the new uniforms because chicks dig red - some posed for pics, while others whizzed past before we could say "Eric." Cunningly, the Focus guys corralled a group of kids who were there and used their autograph-seeking to slow down some of the guests, a ply which proved highly-effective.

I was a little confused by the presence of Joe Arpaio, but then realised he is about the valley's biggest publicity-hound - many reckon he's better at stunts that result in press-inches than doing anything practical to reduce crime levels in his jurisdiction. [As an aside, I guess here's as good a place as any to mention that my wife got a pre-recorded message from Luis Gonzalez on Tuesday, urging her to vote Republican. Any parallels between Gonzo and Dubya, I'll leave up to you to decide] Mind you, the rappers who were also there seemed even more out of place: I guess the aim was to add "street-cred" to the new uniforms, but this felt a contrived and somewhat artificial ploy. 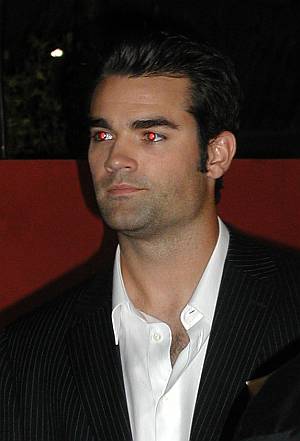 Two captions for the price of one!
Chicks dig red(-eye)
or
Anticipated SLG% next year: .666

The fashion show itself actually took less time than the red-carpet procession, and proceeded briskly, once we'd endured the introduction of all the celebrities - yes, the same ones who had already gone past us on the red-carpet. To be fair, I don't think this was for the media's benefit, as we already had all the biographies of the special guests in the little folder we'd been given on arrival. Still, sensed a little uneasy stirring in the press corps at the back, as it appeared that everyone who'd been anything - even the rappers - got their life stories repeated by Daron and Mark.

This may simply have been to stretch the show out to a reasonable length, as it didn't take long at all for a dozen or so Diamondbacks, plus the professional female models, to meander up and down the runway. Even with the intros, the chat from the commentators, and a little speech from President Hall, I doubt the event lasted more than thirty minutes all told. I'm sure there was some hanging around which could have been done afterwards, but as noted, I felt the need to get the report up as soon as possible. Besides, the only beer they were serving was Miller Lite. :-) 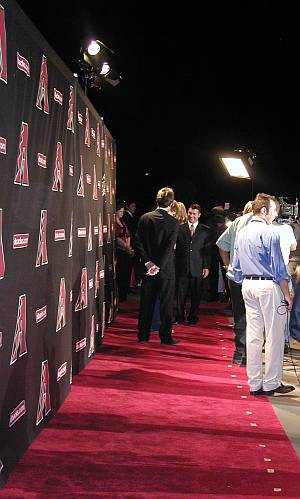 The view towards the 'Hollywood' end of the carpet.

Ah, speaking of freebies, outside of the bar and a few hors d'oeuvres, there wasn't quite the Oscar-level blitz of bribery I was...hoping for, let's be honest, in exchange for my favorable coverage. [Though in my moral defense, I had vowed to give away any such gifts as prizes here. No, really!] According to the post-event press release, "Molina Fine Jewelry, The Melting Pot, Sprint, Crocs, Radiance Medspa and Bondurant Racing School...donated items for the guests who attended the event" - but for us poor schmoes who were there simply to write about it, all we got was a CD-Rom with the new logos and instructions on their use. Thanks for coming.

That, however, was kinda cool, detailing things like the minimum heights permissible for the logo, the "area of isolation" required when they're used, typography, and the precise details of the new palette - so if you want to paint your bedroom in Sedona Red, you could head off to Home Depot and get them to mix up a couple of gallons of emulsion for you. There's a section on the permissable names for the team:

Our official team name is the Arizona Diamondbacks. The use of the name "D-backs" is also acceptable in many situations, and the team encourages its use. In most cases, please do not refer to the team as Arizona. Names and abbreviations that ARE NOT to be used include D'backs, AZ D-backs, D-Backs, AZ Diamondbacks, Diamondback's, Snakes.

Actually, "D'backs" seems to me an entirely legitimate, acceptable contraction: the apostrophe replaces the missing letters, the same as in "I'll" or "shouldn't", for example. Similarly, using "Arizona" to describe the team seems fine, as long as there's no possibility of confusion, when it's established - either specifically or through general context - that we mean the baseball team. However, if I've learned anything over the past six years here, it's to give up expecting Americans to speak or write proper English; dammit, I've even given up spelling color with a U in it - at least for the purposes of this story. ;-) Whether the standard requested by the team will henceforth be applied here, is yet to be established... 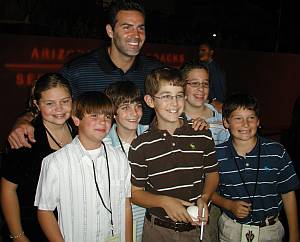 Kurt Warner and the new Cardinals offensive line.
Clearly an improvement on the old one...

I did enjoy the night, and found it fascinating to peer behind the curtain - iceberg-like, only 1/10 of what goes on is generally visible. The amount of work in setting up the event, not to mention making it run smoothly, is very, very obvious, most impressive - and likely, severely unappreciated. So forgive me if I engage in some minor kiss-ass here, and thank Jessica at Prime 3 for setting me up with credentials, as well as everyone else involved.

Reaction to the new uniforms has been about as mixed as you'd expect. Funnily enough, my prediction yesterday seems to ring true: those opposed to the new owners have been critical (see the diamondbacks.com fan forum for their stronghold), while the Byrnes-ites - Josh, not Eric! - who can be found at diamondbacksbullpen.org, have been more enthusiastic. Here, voting currently stands at 61%-32% for approval, which is spookily Napolitano-esque. If you want a neutral opinion, you can get an interesting take at Bleed Cubbie Blue. Al was kind enough to link to my previous piece, and a spirited discussion ensued, which perhaps offers opinions less prejudiced by other factors.

Anyway, this is probably our last word on the subject. Normal service will resume tomorrow, with discussion of, amongst other things, the Matsuzaka bidding. Which I'd be rather more excited about, I think, if I felt we had a snowball's chance in hell of out-bidding the Yankees. I think our only hope if their bid - and probably everyone else's as well - got lost in the post on the way to MLB headquarters.